Nick Bondarev Introduces Us to the Eagle Hunters of Mongolia All photos by Nick Bondarev. Used with Creative Commons permission.

One of the most fascinating topics to explore in documentary photography is how people have retained their traditional culture and way of life. Tribes and ethnic groups are perfect for these, as we’ve previously seen in projects that covered the Toda Tribe of the Nilgiris, the Brokpa Tribe of the Himalayas, the Ladakh locals of India, and the Tengger group of Java, Indonesia. This time, we take a peek into the life of the Kazakh eagle hunters of Mongolia, who keep this fascinating, age-old practice alive to this day.

According to a BBC travel story, the art of berkutchi has been around for 6,000 years, among the best-known practitioners being Genghis Khan and Kublai Khan who both kept thousands of hunting birds. The ethnic Kazakhs of today continue to hunt with the aid of eagles as part of their way of life, which is very different and detached from the modern world. They continue to tame and train eagles for hunting on horseback and live off the grid in portable round tents called gers. Bondarev’s documentary portraits of the Kazakh eagle hunters depict the stark landscapes that serve as their hunting ground. They also provide a glimpse of the hunters’ relationship with the eagles and horses accompaning them. The hunts typically take place during the winter, when the tracks of the prized corsac foxes and other prey are easier to spot in the snow and the eagles are leanest and hungriest.

An insightful Sinchi Foundation feature tells us that the hunters raise these birds as young chicks and live with them for 10 years or so, until the eagles (typically females, as they make the best hunters) need to be released back into the wild so they can mate and make a nest. Training an eagle can take up to several years, but once the bird is ready, she takes her place on the hunter’s left arm as he rides on horseback. Given these details, we can see how the hunters often form strong bonds with their eagle companions. 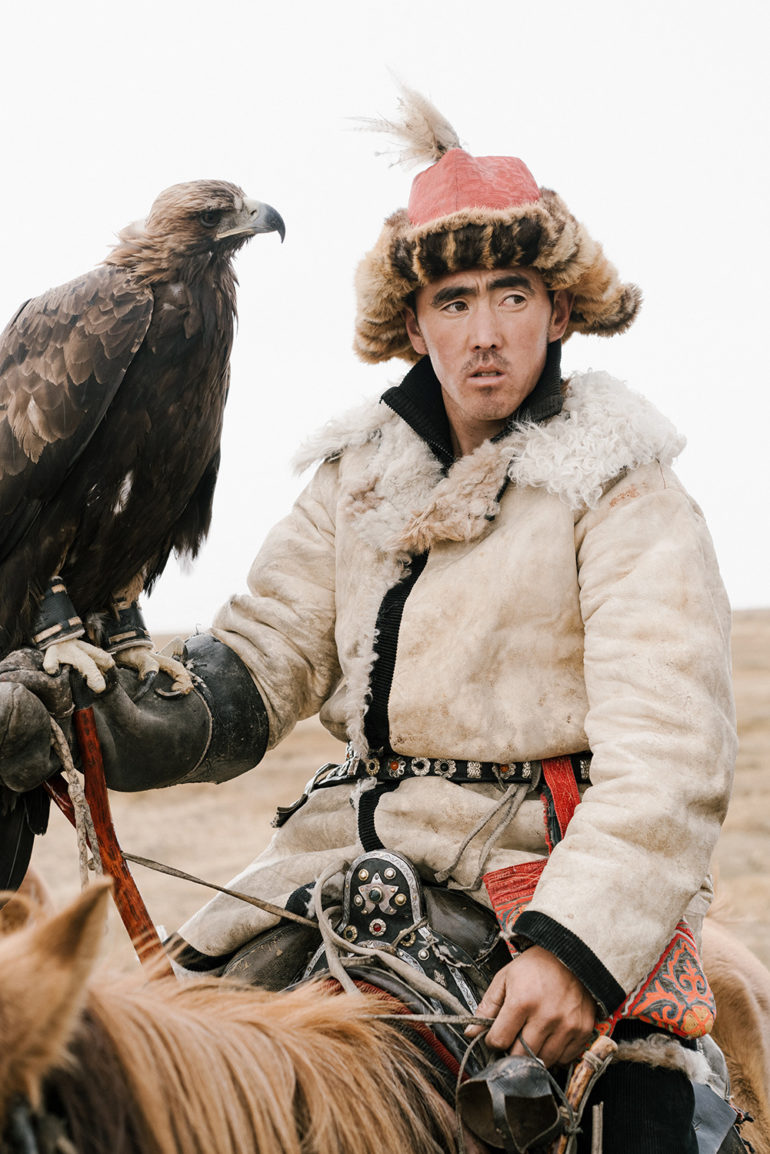 Bondarev describes his work as visual anthropology, telling the stories of man’s interaction with nature and wilderness, as well as the history of cultures threatened with extinction. His goal is not a protest against the modern world and popular values, but to make a wider audience aware of the existence of cultures around the world and the significance of preserving them. This beautiful series certainly makes an excellent example of that.

Don’t forget to check out Nick Bondarev’s website and Behance portfolio to stay updated with his impressive work.