Three Full Frame Cameras Around $1,000 to Step up to From APS-C

Full Frame cameras can be quite expensive to purchase, and that’s one of the main reasons why a lot of first time buyers opt to go with a DSLR or Mirrorless camera that has an APS-C sensor. There’s absolutely nothing wrong with that at all; there are some fine APS-C cameras on the market. But there are some Full Frame gems out there that cost right around $1,000 that will beat most APS-C offerings when it comes to overall image quality and low light performance. If you’re looking to step up from an entry level APS-C camera, or are looking to buy your first camera, these Full Frame bargains are worth a look.

While the three cameras below might not have as many bells and whistles that a lot of cameras have these days, their image quality more than makes up for that, and at the end of the day image quality is what’s really important. Lets take a look at these three bargain priced Full Frame cameras. The Canon EOS 6D is still one of the best entry level Full Frame cameras on the market, and that’s saying a lot since this camera was first released in 2012. Seven years later this camera is still alive and kicking, and for good reason. It’s solidly built, easy to use, and its low light performance is exceptional.

“Overall I found the High-ISO quality to be really very pleasing, and I would feel very comfortable shooting in dark scenarios.”

The wonderful images this camera can produce come from a 20.2 Megapixel sensor and the Digic 5+ image processor. There are 11 focus points, with the center point being cross type. It can shoot 4.5 frames per second, it has a fixed three-inch LCD, one SD Card slot, and built in Wi-Fi and GPS. It has a great silent shutter mode, and it can also shoot 1080p video at 30 frames per second. The native ISO range is 100-25,600, but it can be expanded to 102,400. The camera is built solidly too. The magnesium alloy body has a fair amount of weather sealing so you can take it out into the elements, and it feels great in the hands too. I would go so far as to say it’s one of the most comfortable cameras I have held. For a Full Frame camera it’s small and light (1.69lbs), which makes it very easy to use.

The Canon 6D was the first Full Frame camera I used, and it will forever be one of my favorite cameras. The 6D is really about as basic as cameras can get, especially when compared with some cameras from today, but the image quality is outstanding. It’s widely regarded as one of, if not the best camera for astrophotography, and I know many pro portrait photographers who still use this camera today as well. Images are clean and crisp; colors are typical Canon with skin tones being a particular highlight. You can shoot up to ISO 6400 without having to worry about noise or image quality at all; some newer cameras on the market can’t do that. The Wi-Fi feature allows you to operate the shutter from your smartphone, and you can wirelessly transfer images too, while the GPS allows you to geo-tag your images which is perfect for landscape photographers who want to remember key locations. The RAW files are incredible versatile as you’ll see in one of the images below. A lot of detail can be pulled out of the shadows and highlights using Capture One 12 or Lightroom.

For under $1,000, this is one of the best Full Frame cameras you can get. It’s easy to use, it’s not intimidating, the image quality is exceptional, and it will last for ages thanks to its great build quality. The Canon 6D absolutely proves the point that you don’t have to spend outrageous money to get a quality Full Frame camera. Left side shows edited image, right side of image shows unedited half of image.

Pro Tip: Just because your camera is weather sealed, it doesn’t mean all of your lenses are too. Be prepared for bad weather and keep some weather proof camera and lens covers in your camera bag. They’re super affordable and they will protect your expensive gear when you’re out shooting.

If you would prefer to step into the world of Full Frame Mirrorless cameras, one of the cheapest ways you can do this is with the Sony A7. The A7 was one of the first Full Frame cameras Sony released; it hit the streets back in 2013. The camera is feature packed and can produce gorgeous images.

“The A7 does not share the A7R’s autofocusing maladies. The A7’s ability to focus quickly and accurately makes it a prime choice for street photographers, and generally any type of photographer would be able to make beautiful images.”

The Sony A7 is still a very capable camera in 2019 thanks to all of the tech Sony packed into it. While it doesn’t have in-body image stabilization it does offer a lot of things many entry level Full Frame cameras do not. At the heart of the camera you’ll find a 24.3 Megapixel sensor married to the Bionz X Image processor. The camera is capable of shooting five frames per second, it has 117 focus points, can shoot 1080p video at 60 frames per second, it has a three-inch tilitable LCD, built in Wi-Fi and NFC for wireless transfers and control, and it has a 2,4 million dot OLED electronic viewfinder. While it may not be as fast as some of the newer Mirrorless Full Frame cameras on the market when it comes to continuous shooting, and autofocus speeds, the A7 is no slouch, and it will still do a mighty fine job for for you. It’s a great camera for any type of genre thanks to it’s overall performance, and the lens selection available for it (Sony E Mount).

The image quality is fantastic too. You’ll be able to capture images with great colors and detail. You can shoot up to ISO 3200 and still have incredibly detailed photos, and the RAW files are great! Thanks to the cameras fantastic dynamic range you can really manipulate the files and can pull out a ton of detail in post. You’ll be pleased with the build quality of the A7 too. The magnesium alloy body is as tough as nails, and the textured grip really makes the A7 nice to hold. The camera is quite a bit smaller than DSLRs but, it’s not so small that it’s uncomfortable to hold. The A7 weighs in at 1.69lbs, and is very easy to work with. The body is also weather resistant. When we were testing the camera we took it out into a few rain storms and it functioned just fine. The A7 is a solidly built camera for sure, and it will last you a while. Battery life is decent; you can get about 350 shots per charge.

The Sony A7 is a truly great place to start if you’re perhaps upgrading from an a6000, or if you want to jump right into Mirrorless Full Frame cameras. You can pick up a brand new Sony A7 with the solid 28-70mm lens for under $1,000. It’s an absolute bargain when it comes to Full Frame cameras, and is definitely worth your consideration. Pro Tip: The Sony A7 is a phenomenal camera with an outstanding list of features, but it is a little battery hungry. Make sure you keep some extra batteries on your person so you can just keep on shooting. These third party batteries work just as well as the OEM ones, and they’re a fraction of the cost. 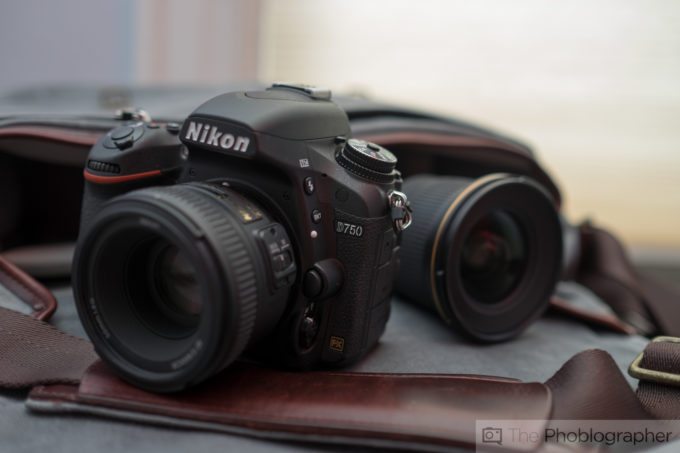 The Nikon D750 is Nikon’s entry level Full Frame camera, but it’s so good that it is still a firm favorite with many professionals today. Launched in 2014, the D750 is still one of the best budget Full Frame cameras on the market. It was ahead of it’s time in 2014, and five years on, this Nikon is still up there with the rest of the pack thanks to its rugged body, and excellent image quality.

“The Nikon D750 focused quickly and accurately no matter which lens we mounted on it. There were only a handful of times when the D750 wasn’t able to lock on and this was only due to trying to use the camera in complete darkness. In my testing it seems the D750 has better low light autofocus performance compared to the Nikon D810.”

Thanks to The D750’s rugged build quality, excellent weather sealing, and outstanding overall performance the D750 is still relevant today. The D750 has a 24.3 Megapixel sensor which mates up with Nikon’s EXPEED 4 image processor. This combo gives the camera the ability to fire off a respectable 6.5 frames per second. You’ll also find dual SD card slots, a 51 point focus points, a 3.2-inch vari-angle screen, and HD video capabilities. Image quality from the D750 is exceptional, and it’s the main reason why this camera is so well loved. The D750 is capable of producing images that are virtually noise free up to ISO 6,400, and its dynamic range is outstanding too. You’ll have no worries getting your RAW files looking exactly as you want them in post.

The weather sealing is excellent on the D750, and it’s a beefy camera that tips the scales at just a hair over 1.7lbs. Its body is larger than the other two cameras mentioned on this list but the camera feels solid and nice to hold and use. The grip is deep and the texturing on it feels nice. The controls are all well laid out, and it’s just easy to use overall. The Nikon D750 is the most expensive camera on this list at just a few bucks under $1,300, but what a camera! The images the D750 churns out are stellar, and it’s build quality will fill you with confidence. In terms of Full Frame cameras that are around the $1,000 mark, the D750 is really hard to beat.