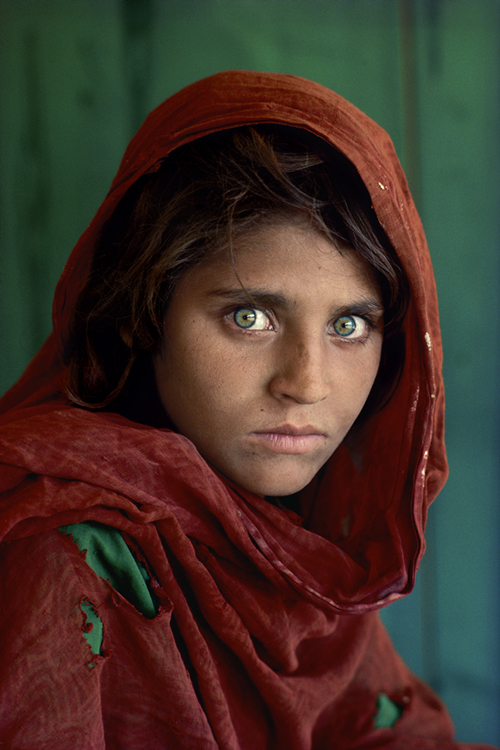 Steve McCurry was my first photography influence, and I didn’t even know it

When I was a kid back in the 1980’s, I devoured issue after issue of National Geographic at the library. I’d read them cover to cover, one after the other. I can still remember seeing his iconic Afghan Girl portrait, which is among the greatest pictures ever created.

It’s weird. ​If you ask me about my biggest influences, I’ll say Albert Watson, Irving Penn, and Richard Avedon. But my actual portrait work says​ it’s Steve McCurry all the way.​ ​That’s astounding to me ​because I started my photography journey in 2008, over 15 years after I stopped reading National Geographic. So when Masters of Photography announced a class with Steve, I was pumped, and not just because of my nostalgic connection to his work. I loved Masters of Photography’s class with Joel Meyerowitz, and I’ll always jump to learn from the masters. Steve McCurry is one the all-time great photojournalists. He’s best known for his iconic National Geographic work, and has been a member of the prestigious Magnum Photos collective since 1986.

“As I said earlier, this is not a recipe-style class where Steve tells you to shoot portraits at f4 and 1/200s. And to get the most out of this class, you have to read between the lines.”

Steve’s been around some rough stuff having covered the Soviet Invasion of Afghanistan, the Iran-Iraq War, the Lebanon Civil War, and the Gulf War, among others. And on 9/11, when the World Trade Center was falling, he ran towards the towers, not away. That says a lot about Steve’s dedication to visual storytelling. As a portrait photographer, Steve McCurry has a rare gift. His portraits are visually striking, but gentle and compassionate. Very few photographers can walk that line, though Sally Mann and the late Mary Ellen Mark (R.I.P.) come to mind.

What You Get in Steve McCurry’s Class

Here is the class trailer from Masters of Photography:

Here’s the table of contents:

Each section has an accompanying PDF study sheet with a complete transcript, something I find very handy. Navigation on Masters of Photography is pretty simple and intuitive, and it works just fine on mobile devices.

Here is what the main navigation screen looks like:

And this is what the lesson screen looks like: There appears to be a formatting glitch on the right since the video player sticks out a little bit. However, it’s not obtrusive when watching the lessons. Underneath each video, there’s a brief description, a link to download the corresponding study sheet, a comments section, and a chapter list so you can skip around to different videos.

There are two small annoyances:

But these are minor issues that I’m sure will be corrected, and they didn’t interfere with my enjoyment of the class. As with the fantastic Joel Meyerowitz class, the cinematography is stunning – the best I’ve ever seen in a photography tutorial.

“In the Cityscapes chapter, Steve talked about shooting in Calcutta, India. He wanted a view of the street from above the ground, so he started knocking on doors, and ended up in a family’s bedroom with a perfect vantage point”

The chapters come in two flavors. Some are interview-style lectures where Steve discusses topics like his influences, the thought process behind his best-known pictures, reading light, composition, genre-specific ideas, and the most important part of this class — his incredible dedication to a photographic life. In others, we follow Steve as he shoots real subjects in Havana and Lisbon.

I spend a lot of time and money on online education, in both photography and other areas like writing and marketing. So I’ve seen the full gamut of instructor types. I actually have a hard time classifying Steve, but the word ‘workman’ comes to mind. Steve does a good job of explaining his working process in very simple terms. He does not over-intellectualize the art form (or his own work), and he’s clearly not obsessed with technical details. He’s more obsessed with telling an effective story with his photos.

If you’re looking for a cookbook-style class with a recipe for a ‘Steve McCurry Special,’ you’d better look elsewhere! This is clearly more about his psychology and, to that end, aimed at higher levels of thought and experience. CAPTION: Dust Storm. Rajasthan, India, 1983.
INDIA-10219.
MAX PRINT SIZE: 60X80
IG: Dust Storm, Rajasthan, India, 1983. From the new portfolio, Steve McCurry: India. Published in collaboration with Peter Fetterman Gallery. To see more from the portfolio visit @peterfettermangallery. My photographs from India and the new limited edition portfolio will be available for viewing at @photolondonfair May 19-22, Peter Fetterman Gallery Stand C15
05/12/2016
I was in a beat-up taxi traveling through the desert to a town called Jaisalmer on the India-Pakistan border. It was in June, and as hot as the planet ever gets.The rains had failed in this part of Rajasthan for the past thirteen years. I wanted to capture something of the mood of anticipation before the monsoon. As we drove down the road, we saw a dust storm grow -a typical event before the monsoon breaks. For the miles it built into a huge frightening wall of dust, moving across the landscape like a tidal wave, eventually enveloping us like a thick fog. As it arrived, the temperature dropped suddenly and the noise became deafening. Where we stopped, women and children worked on the road -something they are driven to do when the crops fail – now barely able to stand in the fierce wind, clustered together to shield themselves from the sand and dust. I tried to make pictures. The road workers didn’t even notice me. In the strange dark-orange light and the howling wind, battered by sand and dust, they sang and prayed. life and death seemed to hang in precarious balance. – McCurry, Steve. (2000). South SouthEast. London: Phaidon Press Limited, 97.
Phaidon, final book_iconic, page 47.
Book_Iconic Photographs
Book_Untold
final print_Genoa, Sao Paulo, Birmingham, HERMITAGE, Zurich, Ankara, Rubin
Graphic Novel_book
Fine Art Print
retouched_Sonny Fabbri 8/2015

The biggest thing I learned from this class is why I’m not a world-class photographer. I’m not joking! I’m not going to spill the beans on all the great lessons in this class, but let me give you an example.

In the Cityscapes chapter, Steve talked about shooting in Calcutta, India. He wanted a view of the street from above the ground, so he started knocking on doors, and ended up in a family’s bedroom with a perfect vantage point. I remember shooting the gay pride parade in New York a few years ago and thinking it would be great to get some shots from one of the second or third floor apartments. But I was too timid to ask people if I could come up even though it was party central. Someone would have said yes. So at some points, I felt like I was watching a Master Class in ‘stuff I’m not doing, but clearly should be doing!’

There’s example after example of Steve going the extra mile to get a picture, and I just kept saying to myself,  “yep, I should definitely be doing that.” For me, those were the “holy sh*t” moments in this class.

“The biggest thing I learned from this class is why I’m not a world-class photographer.”

So what else did I learn besides that I need to push myself a lot harder? Well, I’ve been on the cusp of kicking off my first serious portrait project. Steve’s discussion of projects convinced me to kill one particular idea and pursue another. He helped me identify two composition problems I consistently create in my portraits, which I hope to correct with my next set of pictures.

I also feel inspired to work with more background and foreground layers in my pictures, and to literally walk on the other side of the street to find the right light. (If you take the class, you’ll know what I mean.) Steve also gave me a lot of ideas for working with color, and adding 3-dimensionality to my pictures. I plan on changing my demeanor a bit while I’m on the street after seeing Steve work. My interpersonal skills clearly need improvement.

Oddly enough, Steve also pushed me over the edge to start working with a zoom lens. I’d been thinking of ordering a Sony 24-105mm, but finally pulled the trigger when I saw how many different types of images Steve was pulling out of his Nikon 24-70mm. (Gear heads: he was shooting with a Nikon D810 body.) As I said earlier, this is not a recipe-style class where Steve tells you to shoot portraits at f4 and 1/200s. And to get the most out of this class, you have to read between the lines. You have to really think about what you’re learning, and how you can apply it to your own photography. This class is best-suited for photographers with at least a couple years of experience who want better storytelling skills, particularly in these genres:

If you are a beginner looking for a heavy dose of inspiration, I heartily recommend Joel Meyerowitz’ class.

I award Steve McCurry’s Masters of Photography class 4 out of 5 stars. It could have used more footage of Steve shooting to balance it out. He really is a marvel to watch because he’s so fluid. When seeing him shoot, you see the value of putting in time behind the lens, and I just wanted more of it – even if it was just raw, uncut footage.

That said, I was surprised at how much I learned about myself from this class, which truly sets it apart from most photography education materials. With most videos and books, we just learn about someone else’s way of doing things. Steve didn’t inspire me to be like him. He inspired be to be a better me.

I don’t know about you, but I want to be a great photographer. I don’t need to be famous like Steve is, but in 40 years, I want to look back and know that I really gave it my all. So for me, this class was a bit of a wake-up call. I think I’m like a lot of photographers: I’m full of ideas of what I should be doing, but when I look at my image library, I’m not getting any of them done.

Well, now I know some of the steps I need to take. Thanks Steve!

Check Out the Class on Masters of Photography.

Images used with Permission of Steve McCurry and Masters of Photography