The MiNT InstantKon RF70 is a truly revolutionary instant film camera that has been long overdue.

I’ve been playing with the MiNT InstantKon RF70 for a while now, purposely taking my time with it in order to ensure that I didn’t miss anything. This camera is, in my opinion, the most important instant film camera to have been released in the past few years. It makes use of the less popular Instax Wide format, and it also allows the photographer to have full manual control over the image. The MiNT InstantKon RF70 has a lens with aperture controls and manual focusing utilizing a rangefinder. There is a light meter built in, and the camera is overall pretty lightweight and compact. There isn’t a whole lot to complain about thus far, except for a few things that really concern me. The MiNT InstantKon RF70 looks like this when it’s collapsed down. There is a little bit of a grip for your hand there, but I’d argue that you don’t need it. To get all this started, you’ll need to press a button to the side of the front cover, carefully unfold the bellows/lens system, and lock them into place. Here’s the top of the MiNT InstantKon RF70. You’ll spot the shutter speed dial, the film advance, shutter button with a threaded release inside, pop-up flash, and the ejection port. The back of the MiNT InstantKon RF70 is pretty Plain Jane. There is the rangefinder focusing window, the framing window (they’re different), and the back port that keeps the film holder in its place. Here’s the front of the lens on the MiNT InstantKon RF70. Below it there is a grooved button for pushing the system back together. This has to be done after setting the lens to infinity. Remember that! Look down on the MiNT InstantKon RF70 after it’s unfolded and you’ll spot the aperture ring and the focusing ring — not much else to it otherwise. The MiNT InstantKon RF70 is made of plastic. It’s not a tank like the Mamiya RB67 or the Pentax 67. But instead, it’s more of a plastic rangefinder style camera like the Mamiya 6 and the Fujifilm GW690 III. To that end, I’d be careful with it and wear it with a camera strap. It’s not worth taking it out into the rain either as it isn’t weather sealed. But when you hold the camera in your hand, it feels nice and conforms to your fingers well. For some odd reason, I really want to hold it vertically moreso than landscape.

One point that I feel needs to be addressed is the bellows. They’re well built for sure, but I’m still concerned about the long term viability of the product. It’s bound to be a problem at one point or another.

Something else to consider: you can’t use standard filters. During my testing, I really wanted to use ND filters but I’ll need to use MiNT’s instead. For what it’s worth, I wouldn’t recommend giving this camera to someone who hasn’t shot in manual before. Sure, there is an aperture priority to the MiNT InstantKon RF70, but it’s nowhere as simple as the other cameras out there. You need to open the camera up and lock the lens into place, move the shutter speed to a setting where the camera is electronically activated, and you also need to focus with the rangefinder, then frame with the other window, and finally shoot. Part of what makes this a bit more tedious to use is Instax Wide being locked into ISO 800. I mean, that’s not such a big problem if you know how to work with the film format and your environment, but then you need to be an “actual photographer” who knows how to think outside of the box and solve problems like that.

One of the bigger problems that I found with using the two window system is the lack of assistance when it comes to parallax correction. The rangefinder window is very zoomed in and so when it comes to focusing on someone’s face you’ll easily get their nose and perhaps even their ears in focus. It doesn’t take into consideration that you’re probably shooting at f5.6 (like most rangefinders). That’s not all that awful if you work with rangefinders, but then there is the parallax. I’ve moved my eye to the framing window and centered my subject only to see in the final print that they’re off to the right. MiNT should do something about this unless you tend to learn it by yourself. The MiNT InstantKon RF70 is highly dependent on the film, which in this case is Instax Wide and Wide Monochrome, which are both at ISO 800. An ND filter could really help, but I didn’t have that when shooting. According to the rules of Sunny 16, you’ll be shooting at f16 and 1/800th at ISO 800 in sunny weather. But the problem here is that the max shutter speed is only 1/500th. That’s fine if you’re shooting color and want that Pastel look that you can achieve with this film. Instead, you’ll stop the lens down even further. But quite honestly, I’d prefer underexposing the scenes at times, at least with monochrome.

Focusing with the MiNT InstantKon RF70 is done via the rangefinder mechanism. If you’re used to using a Leica or you have vision problems, this is a savior. Rangefinders are fantastic. Just remember that the focusing window and the rangefinder window aren’t coupled.

The MiNT InstantKon RF70 has a 93mm f5.6 lens, which on Instax Wide is fairly wide to normal in range. MiNT told me that the version I’m playing with doesn’t have the final coatings. With that in mind I’m not totally sure how off they are from the finalized versions. For what it’s worth, the lens has gorgeous bokeh. It’s soft wide open, so you’ll perhaps want to use an off-camera light powered down by around a stop of the metering to get some better specular highlights. When you stop down to f8 and beyond, the lens becomes much sharper. With the MiNT InstantKon RF70, I really like the bokeh. It’s a cross between hazy and creamy but, no matter what, it looks beautiful. It’s bound to help you create some gorgeous portraits. Of course, the best bokeh is when you shoot wide open. You should fully understand that when you do this, you’re going to lose sharpness with the lens. The image above was shot at f6.7. But compared to the image below of me at f5.6, you’ll see how soft the lens is. Brent did a great job with this portrait, but man is it soft! I sort of like that look though as it works for the frame. 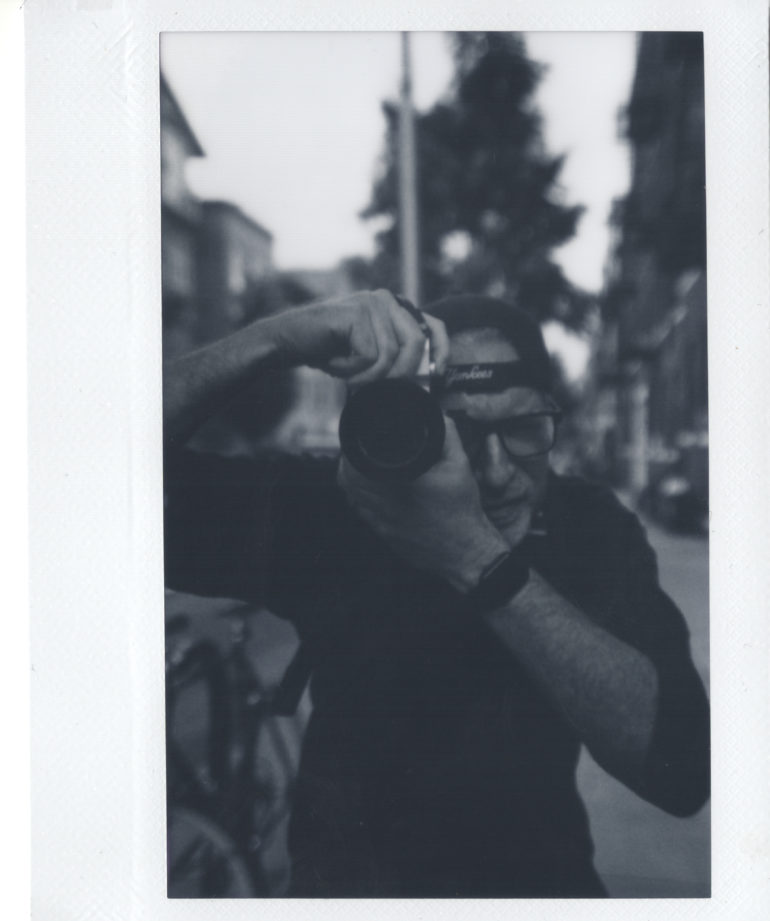 When the frame is underexposed and you shoot monochrome, you’ll get darker and less hazy bokeh. It will also fool the eye into thinking the frame is sharper. Here’s the lens stopped down quite a bit. It surely does get sharper with the sweet spot being at around f11 or so. What you’ll also want to keep in mind is that if the lens is being directly hit by the light, there will be flares that nullify the sharpness.

If you want the best of bokeh and sharpness, you’re going to want to shoot at f8. It won’t be the sharpest, and the bokeh won’t be the best of what’s available but that’s how you’ll get balance. 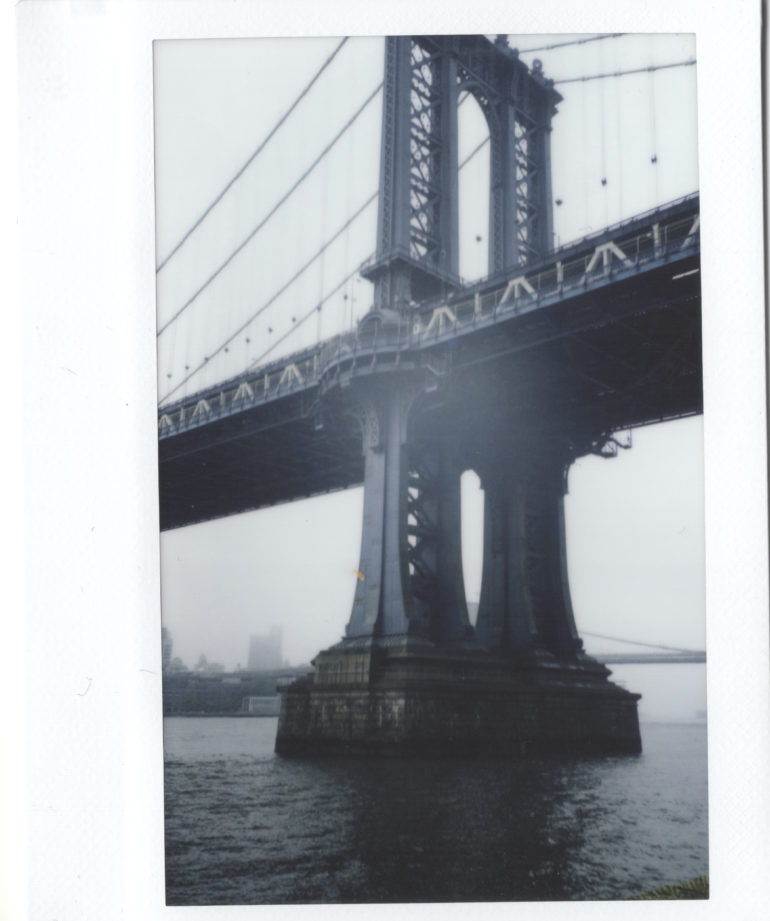 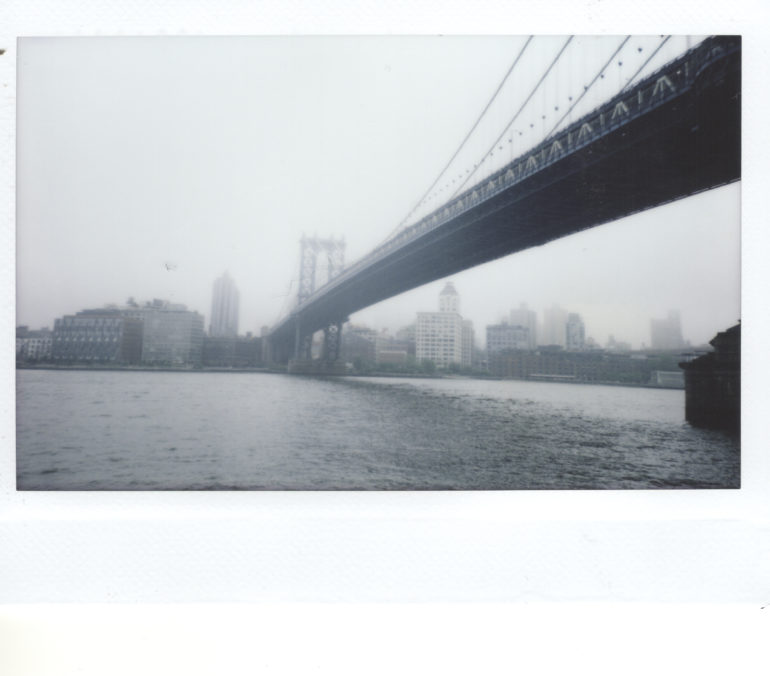 The MiNT InstantKon RF70 isn’t without its faults. The bellows system is one that will and rightfully should have any photographer concerned in the long run. You’ll need to be careful with it. Then there is the fact that, ultimately speaking, Lomography makes cameras with much sharper glass lenses. Of course, their cameras also have quirks and I’m doubtful they’ll ever give us anything with full manual controls. Why? The owners just seem to not care about creating something like this.

Then there is the weird flash audio port, the fact that you need to use MiNT’s filter system, and a lens that ideally should be sharper wide open. I know for a fact that it isn’t the film as I’ve seen over and over again just how sharp results can be with Instax Wide. Plus, let’s not forget about the parallax issues with the two framing windows.

So let’s talk about the great things now: the MiNT InstantKon RF70 is the world’s first fully manual Instax Wide camera. It gives you all the controls you want. Even though it only shoots to 1/500th, there is a lens that stops down a lot. The lens’ image quality can be very nice. This camera is also very compact and lightweight. Most photographers who use it will be really happy with its results. For what it’s worth though, this indeed feels like a very first generation product that I believe should have come out years ago. It’s unfortunate that it hasn’t. On that thought, it’s only recently that Instax camera lenses have really improved in quality.

As much as I hate to say this, I’m torn on the MiNT InstantKon RF70. I’d love to see what a camera with the final coatings on the lens look like, that could indeed change things. But at the same time, I want to tell folks who are really serious about manual control and Instax cameras to wait for the next version.

The MiNT InstantKon RF70 earns four out of five stars.