Combine the Rokinon 12mm f2 with the X Trans Sensor and you’ll get stunning photos.

Whenever wide angle lenses come in, I’m always super excited because a lens like the Rokinon 12mm f2 is bound to be fantastic but also really cool with the way it renders the world. Rokinon has consistently been known as a manufacturer that delivers stunning quality at a really affordable price point. Granted there are sometimes tradeoffs, like it being manual focus (which isn’t that bad if you know what you’re going for), and there have been a variety of reports on quality. But Rokinon has pledged that they’ve improved, and if you look at their higher end lineup of glass then that makes sense. In the case of the Rokinon 12mm f2, it’s a lens designed for APS-C cameras; and what better system to test it on than the Fujifilm X series? 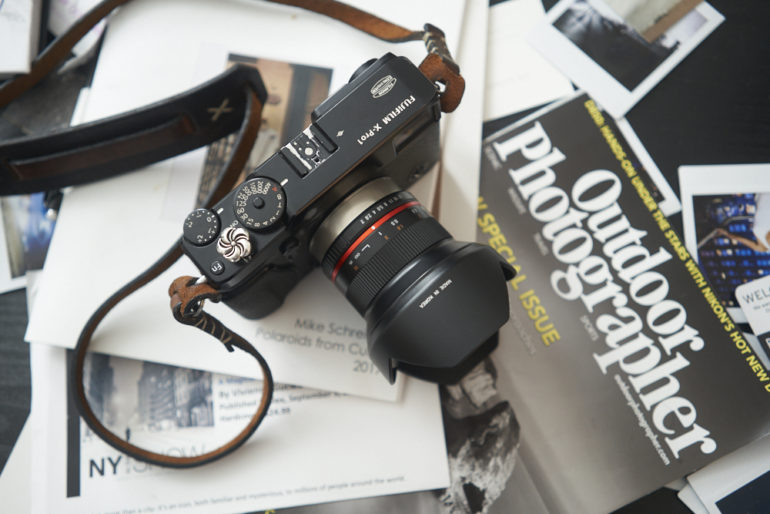 We tested the Rokinon 12mm f2 with the Fujifilm X Pro 1. Overall, the Rokinon 12mm f2 is designed and looks in line with much of what the company outputs. If you look at it from the front, you’ll realize that the hood is removeable. So if you have some sort of lens filter you’d like to attach then that’s absolutely possible. When you look at the Rokinon 12mm f2 otherwise though, you’ll spot that it’s characterized by a massive focusing ring. Well, massive as it pertains to the lens’ dimensions. Towards the rear is the aperture ring. If you’re a Fujifilm lens fan, then you’ll completely understand this. If you’re a Leica lens fan, then you’ll be much more used to the aperture ring being towards the front of the lens. The Rokinon 12mm f2 is made of plastic. While it isn’t built terribly, there are significantly better built lenses on the market. When you hold the lens it feels solid, but something about the exterior of the Rokinon 12mm f2 and many of Rokinon’s other options just doesn’t feel as foolproof as other lenses on the market. Perhaps after experiencing their higher end lenses, I’m a bit spoiled. At this price point though, you can’t really complain that much. There are bound to be folks who purchase the Rokinon 12mm f2 and say that it doesn’t work on their camera. Rokinon lenses typically don’t have AF or exposure communication with cameras unless you get the version with a chipset inside. With that said, you need to take your camera off of pretty much all automatic modes. P mode won’t work. Aperture Priority will work, Shutter Priority won’t work that well, and manual is perfect. It’s also a manual focus lens. So unless you really understand how to use a manual focus lens and how they can be faster to work with than even the fastest autofocus, then you won’t enjoy an optic like this.

Focusing the Rokinon 12mm f2 is done manually. There is a depth of field scale on the lens in case you’re zone focusing. The experience of turning the focusing ring is a smooth one that’s very nice. Considering that it’s such a wide angle though, you won’t need to worry about super precise focusing in many ways. So if you’re used to manual focus, then it will more or less be business as usual. In the case of using the Fujifilm X system, I think it falls right in line with the retro aesthetics. Most people who use Fujifilm products tend to autofocus, but if you manually focus instead then you get a much different experience. If you’re using the Rokinon 12mm f2 then you should know the image quality is pretty fantastic. Is it as sharp as some of Fujifilm’s lenses? Unfortunately not. But if you’ve been looking for more of that actual film-like look, then the Rokinon 12mm f2 can bring that to you in some ways. This is due to its color rendition when combined with specific color profiles and proper white balancing techniques, and the fact that it just has a special look to it. Let’s start off with some of the basics here: bokeh. Who would think that you’d actually be able to get any sort of decent bokeh from the Rokinon 12mm f2? That’s all that it is – decent. Is it phenomenal? No. But you have to expect that here. Can you get bokeh from this lens? Of course you can. Should you be using it primarily for this reason? Probably not. As a point of comparison, here’s a sample photo from the Zeiss 12mm f2.8 Touit lens. Granted, it isn’t a direct comparison but you can still tell the Rokinon lens has dreamier bokeh. To be fair, one lens is an f2 and the other is an f2.8. What’s the point of showing these then? Well, again, you’re really not supposed to try to get bokeh from lenses like these. The Rokinon 12mm f2 handles chromatic aberration pretty well. There isn’t a whole lot of distortion in the scenes that you shoot and part of this is due to the fact that the lens is really just giving the center of its imagining circle to the X trans sensor. I personally don’t mind it too much. What I should mention though is sometimes the Rokinon 12mm f2 can fringe–it’s bound to happen in the most high contrast of areas. Combined with the right white balances and the right film simulations though, it can have a nice, genuinely vintage effect without the need for RNI films, VSCO, etc. The color rendition of the Rokinon 12mm f2 is very dependant on two things: the first is white balance. Like I’ve always stated, shooting at daylight or tungsten white balances will really give the scenes that filmic look so many Fujifilm users crave very much. The other thing is the film simulation profile that you’re shooting at. For most of these images at night, I chose Pro Negative because I wouldn’t shoot with slide film at night. Astia, Velvia and Provia are all slide films. Classic chrome is obviously slide. Acros (if my camera had it) would be a nice option. I think if Fujifilm had a Superia rendition then this would be even better because the film currently still has a 1600 ISO emulsion in stock. The Rokinon 12mm f2 is sharpest when stopped down to f5.6. But for what it’s worth, there are sharper lenses. If you were to look directly at the Rokinon 12mm f2’s images though, you’d be surely satisfied. Additionally, sharpness isn’t everything. Zeiss and Fujifilm both have sharper optics, but neither have this characteristic look to them.

The Rokinon 12mm f2 is a nice lens. It has good sharpness when stopped down and balances that with a characteristic film softness when shot wide open. Then there’s the small size, effective depth of field scale, and the overall nice feeling in the hand. The build quality could be better, and there are better lenses; but they’re more than twice the price point.

I rated the Rokinon 12mm f2 with four out of five stars. Want one? Check out Amazon for the latest price point.