The Sigma 16mm F1.4 Contemporary is a pretty big lens for an APS-C camera

Sigma recently unveiled their 16mm F1.4 for Sony E-Mount (designed for APS-C sensors) and Micro Four Thirds. While at Photo Plus Expo 2017, Sigma was showing off their new 16mm and we had a chance to play with the lens, so here are our initial impressions on it. In terms of ergonomics, the Sigma 16mm F1.4 C DN fits really well in the hand and is the perfect size to be a companion lens to your A6000 series body (including the A6300 and A6500). When holding the lens with a Sony A6300 at the Sigma booth we found the lens to balance well with that camera body. It is maybe a little on the long side, but in terms of weight and comfort, holding the Sigma 16mm felt great in our hands. 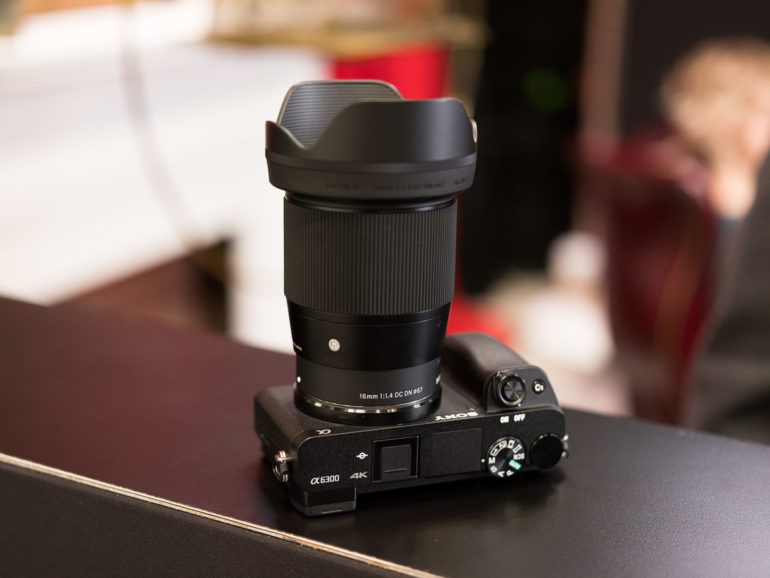 The build of the Sigma lens is about what we have some to expect from Sigma out of their contemporary lenses here in the last several years. That is to say, not quite the level of construction we see in the art series, but still well built and should hold up well in a photographer’s bag. The focusing ring on the lens was smooth to turn and had a good amount of resistance. On the Sony a6300 that we tested the new Sigma 16mm f1.4 on, it seemed to focus every bit as quick as Sony’s own lenses. To be honest, we weren’t really worried about that.

Unfortunately, we were not able to shoot any sample images with the Sigma 16mm; but we were able to see how the lens operated and interacted with the Sony A6300 in a live setting. Trade Show floors are dark, scary places where AF algorithms go to die, but the Sigma 16mm paired nicely with the A6300 and focused quickly and accurately. Beyond that though our impressions will need to wait for our final review.

It is a real shame that Sigma opted to make this lens for APS-C Sony and Micro Four Thirds only. This proves they have the ability to make full frame FE mount lenses, and so we are wondering why they have not jumped in on that market yet. Additionally, this lens would be an ideal lens for the Fujifilm X-Series, so we are sort of scratching our heads at why this included the other two major mirrorless mounts but skipped the Fujifilm system. Regardless, this is a lens that both looks and feels great. We will be coming soon with a full review, so until then, let us just say that if you are invested in Sony APS-C E-Mount or Micro Four Thirds and are in the market for a 24mm FF equivalent F1.4 lens, this looks to be a solid option for you to consider from Sigma.