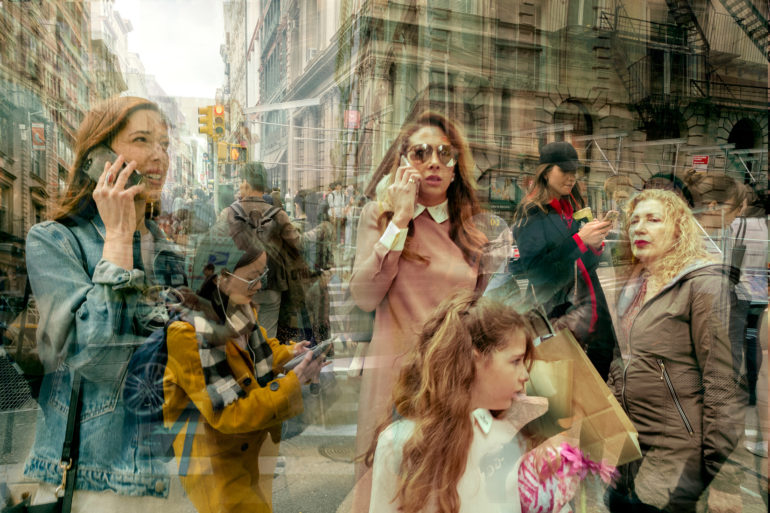 All images by Christian Stoll. Used with a Creative Commons License

There have been lots of attempts to try to capture the chaos that is always happening in NYC; and Christian Stoll’s latest attempt puts it all into details that we can look at and observe with great detail. While many photographers try to do things like long exposures to show the trail of people and vehicles, Christian resorted to multiple exposure photography instead. There are a number of photographers who have done this, but none that have combined aspects of contemporary street photography and fine art in just the right way. Christian, who hails from Germany, is an advertising photographer who has worked with some serious clientele since 1991 and so he understands the need to do a lot of creative work. From his website, it seems like he went out for a number of days in June, captured a number of scenes in a way that any of the great street photographers would just be ecstatic with, and then combined the images. What helps greatly is that Christian most likely set up a tripod (something that can get you in trouble in NYC) and kept shooting various scenes and people as they kept coming in and out of the frames. What this resulted in in a large variety of people, vehicles, etc. But there are still universal constants such as buildings, vendors, etc.

After all the shooting, Christian surely brought in his best images after culling through, merged them together via multiple exposure methods, and created these masterpieces. What’s very interesting is how Christian makes certain people stand out more than others. Assuming that he shot this all with natural light, it most likely means that they just happened to stand out a lot more due to the lighting of the scene at the moment.

A number of the images from the fantastic project are from Times Square. But as a native NYer, I really wonder how this would have turned out if he went to other spots at night such as the Meatpacking district or even some of the bars around the East Village. Be sure to check out the entire project over at Behance.