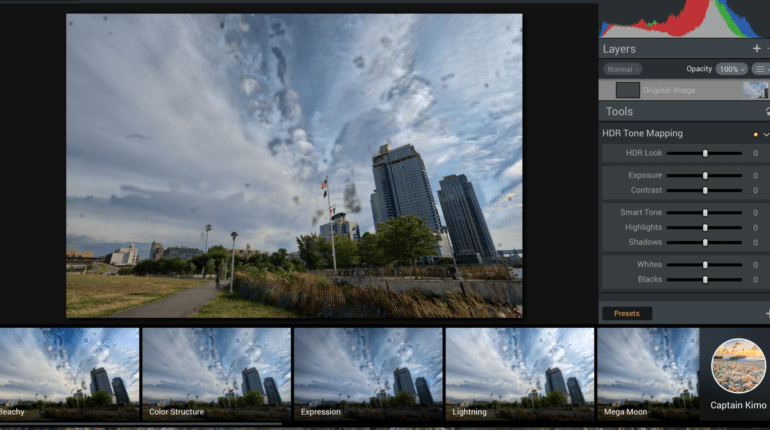 Last year, MacPhun teamed up with Trey Ratcliff to create an HDR program for the Mac called Aurora HDR. Back then, it was a pretty good program; and with today’s announcement of Aurora HDR 2017 you get even more editing power overall. Aurora HDR 2017 features lots of new improvements like a polarizing filter, tone mapping, and a sleeker interface. Many experienced photographers will feel right at home here; and many HDR photographers that are careful with their in-camera shootings will be very pleased with what’s possible here.

Aurora HDR 2017 is the world’s ultimate HDR photo solution, chock full of new tools and capabilities. As a one-stop tool kit for casual and pro photographers alike, it’s versatile interface features a faster, more powerful, feature-rich, and satisfying experience than any other photography software or combination of tools. Perfect for single shots or multiple-exposure brackets, Aurora HDR 2017 gives you the ultimate freedom to create. Aurora HDR 2017 is a program that will be very familiar to Lightroom users as well as Instagram users. For starters it integrates a feature that Instagram has: structure. However, Aurora HDR 2017 allows you to have quite a bit more control over the parameter and in some ways groups it together with clarity. You’ve got a number of options here: you can import one image and Aurora can do its best to create that photo into an HDR; or you can import a ton of photos and have it do it that way. The sweet spot is three to five; and more than that can cause issues as you’ll see later on.

For what it’s worth, Aurora HDR 2017 does an incredible job overall with manipulating a single HDR image if it’s overexposed. In my testing, images that were underexposed to already pull in more information from the highlights weren’t rendered so well. In that case, you’re sometimes best doing it yourself.

The also features cool things like a virtual Polarizing filter–though exactly what it does is also possible by manipulating a few settings. For example, the program lets you edit only the upper or bottom half of the photo if you wish. This is ideal if your horizon is split right down the middle, but otherwise not so much. Either way, it’s pretty useful in your editing but don’t rely on it to be your be-all-end-all editing method.

Edit: you can shift the top/bottom editing if you wish! I didn’t see this before.

Aurora HDR 2017 tends to be quite processor-heavy when it comes to exporting and rendering your photos. My sample images were being imported from my external hard drive and I was indeed editing off of it. When I moved some of the images onto my laptop to actually deal with the editing a bit easier, the slow performance still continued. To be fair, I’m using a Macbook from 2012; but not even Lightroom or Photoshop are this slow.

The term “slow” is also a term that I’m using pretty lightly. By slow what I mean is that one set of images were done by the time I decided to get up and do a sink full of dishes, then returned to have them done only a bit later on.

Further, not selecting these parameters when importing also speeds up the processing. When I get new software in I always like to see just how far I can push it while maintaining some sort of real world perspective that does both the review justice and balances real world needs of photographers. For example, take this set of images I shot while reviewing some of the newest Zeiss Milvus lenses. I asked Aurora HDR to align the images, reduce chromatic aberration, etc. Then it gave me this. Candidly speaking, this is pretty awful. To be fair, it had a tough job–I tried varying compositions and a couple decided to move at a snail’s pace through the path. Then I tried it with a single photo and I got a pretty amazing photo that I really like; but to be fair I think that my own editing skills in Lightroom could have done this too. However, not everyone is as skilled as an editor as I am and doesn’t spend their professional life mostly in that program. This was my personal edit in Lightroom.

The testing continued with something a bit more fair. While testing the lenses mounted to my Sony a7, I noticed just how dirty my sensor became. Lots of spots and random stuff ended up on the sensor after testing lots of products. These four images represent the images from my dirty Sony sensor. I didn’t bother to set the EVs at all because I wanted to see if Aurora could figure it out. The program asks you to set a middle image and for all these tests I simply just clicked OK.

Not too bad overall, though some may consider this too heavily processed. Here’s Aurora’s photo along with my edits in the program. Here’s mine. My touch is a lot lighter. This is Aurora’s straight edit with no input from me. Then I decided I’d try it again. Notice how Aurora also gives you presets? You can apply them with varying opacity layers and combine them with your own edits if you wish. Like the offerings from other MacPhun products; they’re a nice start. Here’s the original file straight from the Nikon D810 which already did a decent job. Here’s my edit after working and massaging the file in Aurora HDR 2017. Not bad at all; but it could surely have been rendered more dramatic.

The new MacPhun Aurora HDR 2017 is very good overall. So why is it getting four stars? I think that I want to see what the entire new Creative Suite will be–which will provide a whole load of solutions for you as a photographer. MacPhun is doing a great job and should be given a load of credit for the products they create.