All images by Gretchen Robinette. Used with permission.

Photographer Gretchen Robinette is a hard working photojournalist and music photographer here in NYC; and recently she took to the Afro Punk Festival to photograph many of the festival goers. According to Gretchen, only one man said no to her during the festival. You may already be familiar with her Unlimited Metrocard series, which focuses on street photographs of people on the subway.

We asked her about how she went about doing the portraits, why she chose the people she did, about the equipment, and about the similarities between musicians and festival goers. Phoblographer: What attracted you to the people you photographed?

Gretchen: I was asking myself the same question as people walked by me. I couldn’t shoot everyone at the festival, with around 40,000 in attendance, so I was mostly following some unconscious selection, I don’t really know what. I would just see someone or a couple and beeline towards them. Everyone was so uniquely beautiful in their own way, but something just draws me to certain people, whether its their eyes, lips, they way they carry themselves. In the past I have mostly shot the musicians performing on stage, but this was the first year I decided to focus on people walking around and then approaching them, rather than sticking to a performance schedule from the photo pit, so I just figured it out as I walked around. Phoblographer: So tell us about your approach with these people: how did you ask them for a portrait and convince them to say yes?

Gretchen: Every time, I just said,”Hi would you mind if I took your photo?” Afropunk is really a space for the freedom of self expression and feeling proud of your own uniqueness, and it was so gratifying to meet so many people who felt confident in their own individuality and wanted to be photographed.

Phoblographer: How did you direct them to get the images that you did? Was it more collaborative or a carefully crafted vision from you? Gretchen: I didn’t do any directing other than sometimes asking them to stand in front of a wall or background that was less cluttered, or not looking directly in to the sun. Sometimes i would stop someone in the middle of a crowd and didn’t have the option to alter the background, so it was shot exactly how I met them. I just let them do what they wanted for the camera. I shot 2-3 images max per person, to get both horizontal and vertical, so what ever they did, is what I got.

Phoblographer: Tell us a bit about the lighting, how did you do it?

Gretchen: I’ve been photographing Afropunk for the last 3 years now, but this was the first time I used flash and asked for permission for portraits. Usually I shoot more candid and less direct, with natural light. I still wanted to keep it simple, so I used one off camera strobe hand held, and sometimes a second strobe on camera to trigger the off camera one. No modifiers. Phoblographer: You’ve been a music portrait photographer for years, do you feel that there is some sort of parallel between photographing festival goers and musicians? Is there some sort of similar intensity?

Gretchen: I always treat musicians and the festival attendees the same. I’m pretty sure several of the people I photographed walking around the festival were musicians also. Its intense trying to shoot an interesting portrait of anyone in less than 30 seconds no matter who they are, so I mostly just focus on capturing some part of their individual character that I could bring out and not worry about much else. 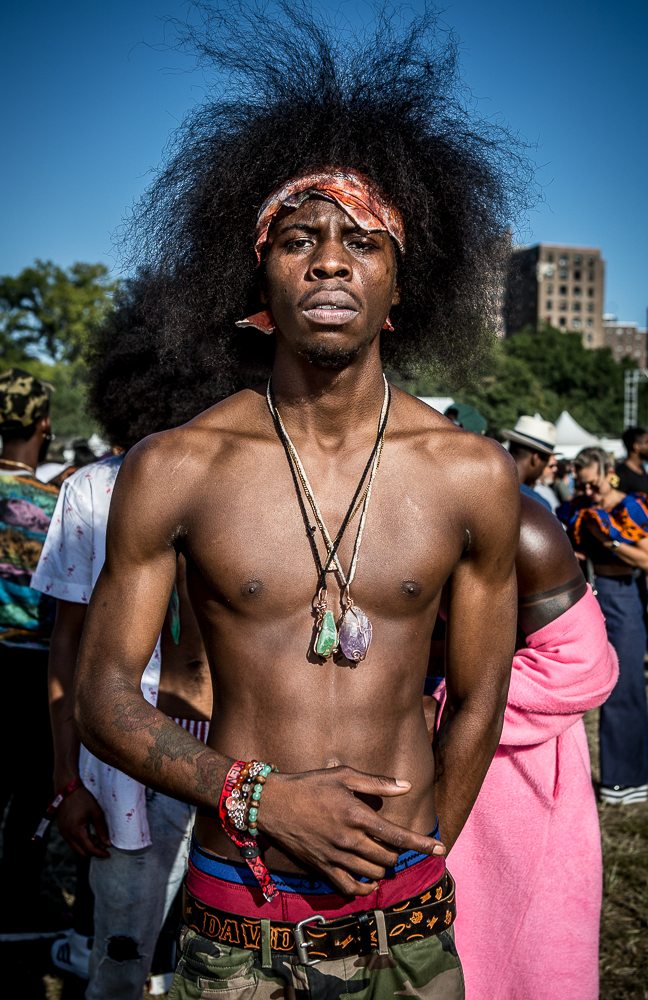