Yesterday, Pentax announced their brand new K-70 DSLR camera; which is offering weather sealing in a DSLR at a very affordable price point. In fact, it’s built so tough that the company claims it to be able to survive down to 14°F (-10°C).

The Pentax K-70 also offers a top sensitivity of up to ISO 102,400, a PENTAX-developed PRIME MII image processor, a new Hybrid Autofocus (AF) system, the PENTAX Pixel Shift Resolution System, which produces high-resolution images, and an in-body shake-reduction mechanism that reduces the effects of camera shake up to 4.5 shutter steps.

Oh yeah, and WiFi. When it hits retailers, the camera will run you $649.95. Feature on this camera and the newly announced lens are after the jump.

Main Features of the Pentax K-70 1. Super-high-resolution images captured with approximately 24.24 effective megapixels and a top sensitivity of ISO 102,400 The PENTAX K-70 combines a compact, body with dustproof, weather-resistant construction and outstanding cold-weather performance at temperatures down to 14° F (-10°C). It features a new contoured grip design and easy access to mode dial and control buttons. The LCD monitor features a brightness level that can be instantly adjusted to any environment, and also red-light mode which keeps ambient light from interfering with astronomical photography.

The PENTAX K-70 features the high-precision SAFOX X AF sensor module, which assures responsive, dependable autofocus operation. With its 11 sensors, including nine cross-type sensors in the middle, this AF module assures pinpoint focus on the subject at a minimum brightness level as low as -3 EV. The PENTAX K-70 assures outstanding AF tracking performance with subjects on the move, thanks to such advanced features as the Select-area Expansion function, which automatically refocuses on a moving subject after it moves away from the initial point, with the help of the neighboring points; and an AF Hold function that maintains the initial in-focus point even when the module loses sight of the subject. Capturing four images of the same scene by shifting the image sensor by a single pixel for each image, the Pixel Shift Resolution System* then synthesizes them into a single composite image. This innovative system obtains all color data in each pixel to deliver super-high-resolution images with far more truthful colors and much finer details than those produced by conventional APS-C-size image sensors. A motion correction function**, which automatically detects a moving object during the synthesizing process, to accommodate a wider range of scenes and subjects.

By applying microscopic vibrations to the image sensor unit at the sub-pixel level during image exposure, the PENTAX K-70’s AA (anti-aliasing) filter simulator*** provides the same level of moiré reduction as an optical AA filter. Unlike an optical AA filter, this innovative simulator lets the user adjust the level of the moire correction.

Since the PENTAX K-70’s SR unit has a flexible design that shifts the image sensor unit in all directions, it provides a host of handy shooting functions, including ASTRO TRACER, which simplifies advanced astronomical photography when combined with the optional O-GPS1 GPS Unit.
* When using this system, the user is advised to stabilize the camera firmly on a tripod. When a moving subject is captured in the camera’s image field, its image may not be reproduced clearly, either in part or as a whole.

** The movement may not be sufficiently corrected when the object is moving in a certain direction and/or pattern. This function does not guarantee that the movement is properly corrected with all subjects.

*** This function works most effectively with a shutter speed of 1/1000 second or slower. This function may not be combined with some shooting modes, including the Pixel Shift Resolution system.

Within its compact body, the PENTAX K-70 incorporates a glass prism finder featuring the same optics and coatings as those used in higher-level models. A nearly 100-percent field of view and a magnification of approximately 0.95 times provides a wide, bright image field for easy focusing and framing.

With a top shutter speed of 1/6000 second coupled with its high-speed continuous shooting function of up to six images per second, the K-70 is is perfect for capturing fast moving subjects at sporting events or wildlife.

The PENTAX K-70 captures high-resolution, Full HD movies with stereo sound using a built-in stereo microphone. In combination with compatible lenses, it allows the user to use the Continuous AF (AF-C) mode* to keep accurate focus on a moving subject, or take advantage of a new aperture control function** to automatically assure a proper exposure level even in fluctuating lighting conditions during movie recording. It also provides a host of distinctive visual effects for movie production, including the 4K Interval Movie mode that connects a series of 4K-resolution still images at a fixed interval to create a single movie file, and a Star Stream mode to fade in and out the traces of stars to recorded movies. 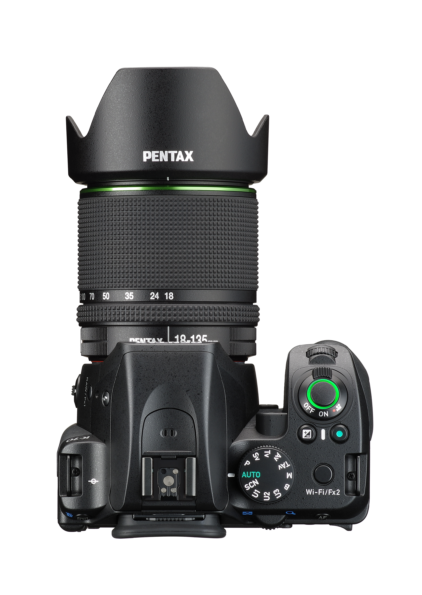 ** During movie recording, the aperture control function is available only in combination with the HD PENTAX-DA 55-300mm F4.5-6.3ED PLM WR RE lens.

9. Vari-angle LCD monitor for easy image viewing from all angles

The PENTAX K-70’s vari-angle LCD monitor allows for the positioning of the monitor at any desired angle, making it easier to compose the image in a wide variety of applications.

10. An array of functional customization options

The PENTAX K-70 provides three USER modes and two Fx (Function) buttons, to which the user can assign desired camera settings depending on their shooting preferences. Three settings (CLEAR TONE, HDR LANDSCAPE and ASTROPHOTO) are preprogrammed in the camera as default. By installing the dedicated ImageSync application on a mobile device, the user can remotely check the Live View image, capture still images, adjust such camera settings as aperture, shutter speed and ISO sensitivity to the desired level through the mobile device, as well as download captured images onto the mobile device, then upload them on social networking service websites. Availability of the HD PENTAX-DA 55-300mm F4.5-6.3ED PLM WR RE lens will be announced in early July. When available, it can be purchased at www.ricohimaging.com for $399.95, as well as at Ricoh Imaging-authorized retail outlets throughout North America.

With the adoption of a rear-focus system, the lens is almost 10 percent lighter than the PENTAX’s previous 55-300m lens—the HD PENTAX-DA 55-300mm F4-5.8ED WR. By driving this focusing lens using a pulse motor (PLM), which is directly linked to a lead screw, this zoom lens also operates faster — approximately 8.3 times at its wide-angle end and approximately 1.7 times at its telephoto end —and quieter than its predecessor. When mounted on the new PENTAX K-70 digital SLR camera body (also announced today), it assures smoother, faster AF operation with dimly lit subjects, thanks to an improved AF algorithm that exchanges AF data between the camera body and the lens with greater precision. Operability of its power-assisted focus system during manual-focus operation has also been improved. Since its distance ring is designed to accurately detect the angle of rotation and swiftly react to a change of angle, this zoom lens can shift its focusing lens smoothly in response to distance ring operation.

This is the first K-mount lens to feature an electromagnetic diaphragm control system.* When mounted on the new PENTAX K-70 digital SLR or other compatible camera body, it assures smooth, high-precision aperture control during video recording. This state-of-the-art system shifts the aperture setting automatically and smoothly to result in more natural, true-to-life videos, even when the brightness level of the subject changes drastically, such as a live theater performance or a sunlight-streaked forest scene, or with active subjects such as athletes and animals. Coupled with the PLM mechanism, the system also assures smooth AF tracking operation and exposure control, while minimizing the intrusion of focus- and aperture-shift noises during video recording.

* NOTE: This lens’ KAF4 mount is compatible with an electromagnetic diaphragm control system. In order to use this lens, the camera’s firmware must be upgraded to the latest version (except for the PENTAX K-70). Cameras compatible with this system are: K-1, K-3 II, K-S2 and K-S1. If this lens is mounted on a camera without proper firmware upgrade, its diaphragm control mechanism becomes inactive, making it impossible to obtain correct exposure.

With focal lengths from 84.5mm to 460mm (in the 35mm format), this telephoto zoom lens provides approximately 5.5-times zoom coverage from medium- to super-telephoto ranges. Its 14-element, 11-group optics include an ED (Extra-low Dispersion) optical element to effectively minimize spherical and chromatic aberrations, while delivering high-resolution, finely detailed images with rich contrast from the image’s center to its edges and minimal color bleeding at any focal length setting. In addition to a short minimal focusing distance of 0.95 meters, made possible by the rear-focus system, the lens barrel has also been designed to be free of extension during AF operation. Thanks to its retractable structure, the lens is only 3.5 inches (89 millimeters) long and weighs less than one pound (442 grams).

The lens features dependable, weather-resistant construction with 11 sealed parts to effectively prevent the intrusion of water into the lens interior. When paired with a weather-resistant PENTAX digital SLR camera body, the result is a durable, dependable digital imaging system that performs superbly in demanding shooting settings.

・Quick-Shift Focus System allows the user to instantly switch to manual-focus operation, even when the camera’s AF system is in operation.

・SP (Super Protect) Coating applied to the front surface of the lens to effectively repel water and grease.