Impact, which claims to formerly be a B&H Photo house brand, has had a bunch of hit or miss products over the years though they’ve improved quite a bit. These triggers not only serve to set off flashes and studio strobes when connected, but also serve to trigger your camera as a remote shutter release when provided with the according cable. They do their job, and they do it quite well.

But for the more 4.0 (as opposed to 2.0) photographers amongst us, this product may have come too late. The Impact Powersync 16-80 transceivers were used with the Canon 6D, Sony a7, Fujifilm X Pro 1, Canon Elan EOS 7, Mamiya 67, and the Einstein E640 monolight. The bag in the photos is the Able Archer Mapcase. The Impact Powersync 16-80 transceivers are an interesting device designed to do as much as it can in a small body. You name it, and they probably tried to pack it into these things with the exception of TTL transmission and flash control. We start the ergonomics tour with the front.

The front of these triggers may seem intimidating but once you actually read what the buttons are associated with, you’ll pass the test with flying colors. The buttons are nice and big and the LCD screen is clearly readable. You’ll also find a hot shoe here in case you want to mount a flash into it. The back of the Powersyncs has a tripod socket and a battery port. The door to said port closes very easily with a typical door that you’d see on any of these typical triggers. The sides have different ports. You’ll be able to connect a PC cord, two different flash inputs and a USB cable. The options are very welcome; though to a degree I find PC Sync ports to be quite antiquated at this point because, well, cables tend to fall out of them. However, there are some cameras where these are useful. The top of the Impact Powersync 16-80 has the radio antennae and the power switch. This position makes a whole load of sense in real life use, but if the trigger is in your camera bag, there is a big chance that it will accidentally be activated and you’d better hope that you have spare batteries on you. Beyond that, you may even forget to turn the trigger off since the power switch isn’t even in direct sight. Let’s just get this one right out of the way. The Powersync 16-80s are built nowhere as well as the original Powersyncs. However, these are a heck of a lot more functional and useful in the right hands.

These transceivers also look and function a lot like the PocketWizard Plus III transceivers. Despite having more buttons though, they’re easier to use and have more functionality given the hot shoe attachment. If I were to pick one or the other today, I’d go with Impact’s. They just make more sense even though the PocketWizard does lots of the same things. PocketWizard has long been known for their reliability, but in 2016 I feel this isn’t an issue anymore. Heck, we stuff WiFi transmitters into cameras, give them NFC, Bluetooth, etc and they work fine.

If Batman had a car remote for the Batmobile, he’d probably base it off of these. But instead we all know that the car’s electronics are calibrated into the suit. 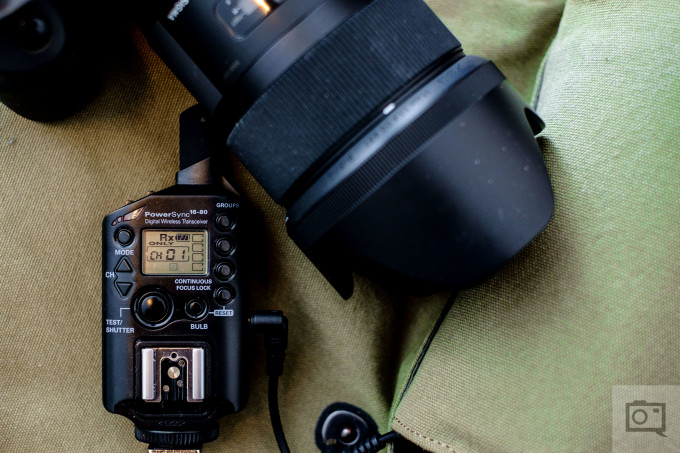 These transceivers are very straightforward in real life use. Simply mount them to your camera’s hot shoe, put the other Powersync on the flash/strobe with the according connection, and shoot after you’ve ensured both devices are on the same channels. They’ll work; and they’ll work rather flawlessly. They also work at a very long range–which is a plus if you’re the type of shooter that on a regular basis needs to do that. That’s a great feature for photojournalists shooting sporting events.

They also hold true to the 1/250th flash sync which worked consistently and reliably.

Then there is the other functionality of these: they can also be used as a wireless shutter release for your camera. To do that, one Powersync serves as the transmitter while the other connects to the camera via a specific cable that isn’t included. It can’t set shutter speeds unless the transmitter and receiver are in bulb mode. For landscape photographers, photographers shooting longer exposures with second curtain flash, and those doing long exposures, this will be a very welcome feature. To that end though, the photographers that will reap the most benefits here are the ones that don’t own connected cameras. When testing this with the Canon 6D, it sort of made sense to me. Using these transceivers vs hooking up to the camera via its WiFi app saved battery life for sure, but it meant that I needed to carry something extra with me. With the nature of connected cameras, you don’t really need to do that anymore. To that end, why would I use this transceiver if Canon’s already stellar mobile app let’s me do this and more from my iPhone?

And why would I do it with Sony?

For the 4.0 photographer that I spoke about earlier, these don’t make a lot of sense. For absolutely free, I can download any one of these companies’ apps and unlock even more power with my camera using my smartphone. Again though, that’s if I am using a connected camera. Oddly enough, where the Powersync 16-80 transceivers came into exceptional use is with my film cameras. When using my Canon EOS Elan 7, this is a perfect device. I can trigger flashes remotely and providing that I accept that I won’t get TTL transmission or power control, I don’t have much of a problem. Then when I want, they double for me to be able to do long exposures when connected to the right port on the camera.

With the right configuration, they also work with my Mamiya RB67 though did a better job with my Bronica ETRs due to the design and functionality with the camera.

To that end though, the Impact Powersync 16-80 transceivers are good for the less connected cameras and more for the analogue/pre-connected digital crowd.

The Impact Powersync 16-80 transceivers aren’t for the more young, with-it, savvy connected photographers amongst us. If you’re the type that likes shooting, porting to your phone and sending to Instagram, then move on–these aren’t really for you. If you don’t own a connected camera and want the maximum versatility, this is the transceiver for you. That pretty much means that if you’re most DSLR camera users or older mirrorless camera users, these products will serve you well. They’re also great for film camera users if you prefer a bit more control with more aspects of your photography.

Overall though, they’re solid products. My problems are that I really wish that Impact offered a version with some sort of monolight or flash control and that I felt like I was buying into a true system of some sort. Controlling the Bolt lights or something else would just make sense. In today’s world, it’s kind of a standard feature for the more demanding strobist. I’ll only use lights that have direct connection flash triggers these days because it makes my workflow that much quicker and easier.

The Impact Powersync 16-80 transceivers receive (pun intended) four out of five stars. Want one? Check out B&H Photo for the latest pricing.