Rangefinder cameras will always be at the heart of many photographers for their small size, simplistic ergonomics, silent shutter, and low profile looks that keep many away from thinking that you’ve got an expensive camera around your neck. Though they gave way to SLR cameras in terms of widespread use, they were still very popular amongst documentary and street photographers. In fact, many of the cameras still are in use by photographers.

We’ve rounded up some of the best film rangefinder cameras that you can find or that were iconic to many photographers. Here’s our list. The Canon QL17 is a film rangefinder that many loved and continue to love even today. It used 35mm film, was compact and has a fixed prime lens with a fast aperture. It has a shutter priority mode and manual mode and its small size and good looks coupled with extremely affordable price tag is one of the best ways to get into working with a rangefinder camera. Just make sure that the rangefinder is actually clean. For many years, Leica was known as a company that served the higher end and accordingly charged higher end prices. Then they came out with the CL and cobranded with Minolta s the CL-E. It was and still is an incredible camera though a bit quirky in some ways. It is one of the smallest M mount cameras ever made and had an interesting shutter dial around the front of the camera instead of on top like many of their M series cameras have.

The best thing about the Leica CL though was that it was affordable for many photographers who easily snatched it up. The problem was that it reportedly started to eat into M sales and so it cannibalized their market. As one of the most coveted cameras for street photography ever made, the Hexar AF is truly worthy of note on this list. The camera was a point and shoot with a fixed prime lens–a 35mm f2 that was supposed to be a copy of the Leica version. Except that the Hexar AF had autofocus, a silent shutter, and a fairly silent film advance. The design influence can be easily seen in the Fujifilm X100 series of cameras.

Many Leica photographers go for the M6, and while that camera surely has its advantages the Leica MP is more of our choice of the best Leica of all time. It isn’t very advanced when compared to many DSLRs out there or any of the digital M cameras, but that’s what makes it so great. It literally gives the photographer all that they need: focusing, loads of framelines, various shutter speeds, an extremely durable build quality, and the access to lots of incredible film. Also check out: 5 Cameras That Were Legendary to Street Photographers When you think of a rangefinder camera, you often think about a 35mm shooter; but one of the best ever made had to be the Mamiya 7 II. This camera had leaf shutter lenses, shot 120 film, used a rangefinder to focus and most of all is probably the most silent camera you can ever get your hands on with the exception of cameras with an electronic shutter. In fact, it’s so quiet that sometimes you won’t even know that you took a photo.

Made by Cosina in Japan, what makes the Bessa R-series stand apart from all other current M-mount cameras is that they come in a number of different oness to choose from. Many are discontinued, but the R2 was the first one to start the series off with an M mount after the Bessa R began the series with screwmount lenses. There are three different models with three different viewfinder magnifications and different sets of frame lines:

So why the R2? It signaled the rise of a significantly more affordable film rangefinder that could use Leica M mount lenses. 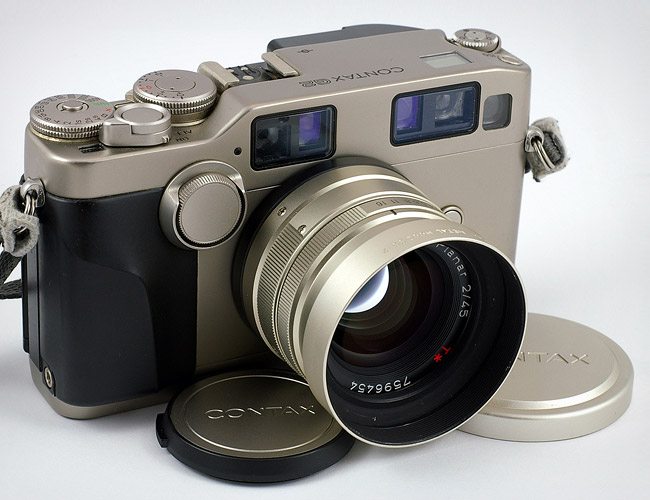 The Contax G2 is a camera that makes this list but is very special. The Contax G series of cameras were small rangefinders made by Zeiss that had autofocusing abilities. The G1 wasn’t so hot with lots of photographers because of focusing issues, but the G2 nailed it and became the love of so many. Additionally, Contax put out a lot of incredible lenses that many photographers still use and adapt onto their mirrorless digital cameras. The Leica M9 was Leica’s first full frame 35mm digital camera–and when it was announced the world couldn’t believe that it was possible. For many years, the world didn’t think that a full frame sensor could go into a camera this small, but Leica proved them wrong. It utilized a special Kodak sensor that delivered image quality just like that of Chrome film. To digital photographers, know that that means that the color was absolutely incredible but the latitude of the files wasn’t the best. The M9 was fairly quiet to shoot though the shutter recock mechanism was a bit loud to the trained ear. Last on this list is one that many photographers don’t know about and others may wonder why we put it on this list. For years now, Leica has been the only camera manufacturer to produce a digital rangefinder of any sort. But for a short time, Epson tried their hand at the game. The Epson RD1 was a digital rangefinder camera with an APS-C sensor, an old school film advance and beautiful ergonomics. Unfortunately, it never caught on–though we believe it surely could if Zeiss tried their hand at it.