Greetings From Mars: A Photo Story of Loneliness All images by Julien Mauve. Used with permission.

Julien Mauve is an author and photographer based in Paris–and his niche is all about creating staged, cinematographic and narrative photography series dealing with human interactions and conditions. No more is that present than in his project “Greeting from Mars.” In this project, Julien demonstrates loneliness and tries to explain his take on our society’s fixation of constantly defining ourselves through the images.

“Loneliness, nostalgia and new technologies are recurring themes in my different projects.” he tells us about his work. Julien has received lots of awards such as being shortlisted for the OSKAR BARNACK AWARD and exhibited in the Somerset House during the Sony World Photography Awards 2015 in London. He’s also been a Sony Global Imaging Ambassador since 2013. 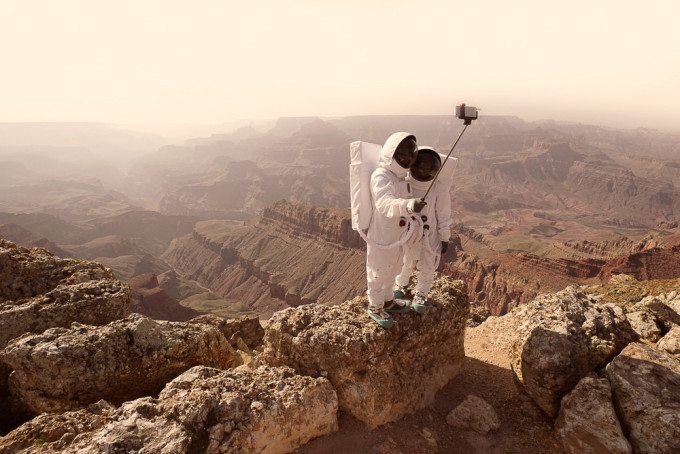 Julien: I’ve always loved printed pictures. It started with my family photo albums when I was young, I spent hours looking at them, fascinated by their power over me. I like the way pictures freeze time and allow you to imagine everything outside the frame. My dad offered me my first analogue camera at the age of 10 and my first reflex at 25. I started my first project 3 years ago and haven’t stopped producing since.

Phoblographer: How did you get into conceptual work like this?

Julien: I would not call my work conceptual since you don’t really need an explanation to understand it. The clues stand in the pictures. As for working in project instead of single pictures, it sort of come out naturally. I wanted to tell stories, to create photographic universes that triggers imagination, to deal with things that touch me as a human being living in the 21st century. All of this couldn’t be achieved with one frame. Loneliness, nostalgia and new technologies are recurring themes in my different projects because they are part of who I am. I feel the need to express myself and so far, photography is the best way I have found. Phoblographer: Life on Mars is incredible, but where did you get the inspiration from for the series?

Julien: I’ve been fascinated with Mars since I was a child. I can picture myself back in college making presentations about it. We hear a lot about NASA, Elon Musk and SpaceX these days. Mars One also, the company that offers people a one way ticket to establish the first human colony on Mars (and intend to create a TV show out of it). Space exploration and colonisation is the greatest adventure of the century and the fact that we may witness it in our life-time (just as our parents and grand-parents did in the 60’s) makes it even more exciting. The Internet nearly broke when Baumgartner jumped from the stratosphere, just imagine the day the first man will put a feet on Mars!

In the mean time, Earth has become really small. We are only 12 hours and 800$ away from the other side of the world. Those easy travelling conditions have made tourism become a lucrative activity (not only for the best unfortunatly). People can visit and enjoy places we would have never imagined only 50 years ago. It took less than 500 years for the Wild West to go from an amazing discovery to an epic touristic destination. Once transportation issues will be solved and if we don’t encounter any massive disaster, space-tourism for mid class people is something we can imagine happening in less than 100 years.

In parallel, smartphones and social networks have emerged, allowing us to share our lives with everyone else in real time, to write our own story. We’ve literally developed a new language to communicate emotions through pictures and that really fascinates me.

These are all the ideas I’ve tried to mix into this project.

Phoblographer: How did you go about choosing the specific scenes and landscapes that you wanted to shoot in? Julien: When it comes to finding Mars look-alike landscapes on Earth, there is not a lot of choice. Basically, what you need is rocks, sand, canyons and no signs of biological life. All of that with a red tint on it. Australia and the Wadi Rum in Jordania have those kind of landscapes but I choose the Wild West because it offered a much larger variety in easily reachable distance. I made my scouting using Google Map, Flickr, Instagram and I chose the places that I thought had the most potential. We ended up having 7 different locations and driving nearly 4000 miles in only 8 days!

Phoblographer: How did Sony help with the project? Julien: I have been a Sony Global Imaging Ambassador for almost two years now and they offer me both material and financial support. When I talked to them about the project they were really thrilled and decided to help me. Funny thing is, I forgot one of my camera when I left Paris. The shooting was supposed to begin 2 days after and it was the week-end. I reached Sony from the plane and they managed to get me the same specific camera available in San Diego. This is the kind of situation when you really enjoy being partner with a global brand!

Phoblographer: How did the ideas for each scene come about? Were the storyboarded and explained to the astronaut?

Julien: The good thing with our world is that we have easy access to a phenomenal amount of data. Especially when it comes to touristic places. So I just spent a lot of time on the Internet looking for pictures of landscapes and touristic poses during the preparation phase. When we flew to the US, I had almost every shot already framed in my mind. But as much as I liked being prepared, you can’t control everything and it is always good to have a window for the unexpected. In fact, most of the pictures I like the most were improvised.

As for the astronauts, well, we were only two persons working on this project so we had to wear the suits ourselves! On some pictures, the camera is triggered with my phone in WIFI. Other times, I simply used the old-fashionned 10s timer and quickly run in the middle of the desert in space-suits to be on the frame. Like any other tourist.

Phoblographer: It seems like there is a story to the series, what exactly is happening? Julien: It’s a couple experiencing Mars as tourists for the first time and sharing their experience. They include themselves in front of those landscapes and affirm their presence but the funny thing is that we don’t see their faces. It could be anyone in those suits and, in fact, it goes against the original purpose of taking a selfie. It was also a way to illustrate this endless pursuit of self-definition we seek with pictures.

Phoblographer: What do you plan on doing with it? A book? Gallery?

Julien: There is not enough material to put on a book and this was not the goal of this project anyway. An exhibition would be great as I have some interesting scenographic ideas. But those things take time, I will engage and defend the serie in different contests in the month to come, hopefully something will come out of it.