Useful Photography Tip #114: How to Conquer Mixed Lighting With Speedlights “I’m about to do something that I really hate to do for the sake of art.” I said to Amanda as we had our first shoot the other night. Of course, what I was talking about was how to conquer mixed lighting–and as an actress and theatre tech she totally understood. When working with flash lighting (daylight) and ambient street lighting in Brooklyn (more orangish in color) it can be a bit of a pain to create a beautiful image.

My initial idea was to light her with an Octabank and set my exposure so that the output from the flash is the key and ambient orange lights would provide a sort of interesting fill that would complement her skin tones. After fumbling with my Octabank (which was misbehaving) I decided on another approach: putting the flash almost right next to the orange light source (which is coming from a wall), setting the flash head zoom to the widest to make it cover the largest area, and having Amanda sit on the floor.

Then the exposure was set accordingly to drown out much of the ambient lighting and make the flash output the key light. In English, what this means is that I worked with a wide aperture and a fast shutter speed. In fact, this image was shot at 1/60th, f2 and ISO 400. At 7L45PM, 1/60th at ISO 400 isn’t going to do much for you.

The result was a light output that blended very well with the orange light and that later on just required me to push the white balance slider either to the blue or the orange to give the image dominance in one color or the other. Indeed, this is the most common mixed lighting situation that I’ve encountered, and it’s finally been conquered with minimal post-production.

So to recap: place the speedlight right by the other light source, make it larger, an overpower the ambient light using your exposures.

Give it a try for yourself, and check out two other photos after the jump. 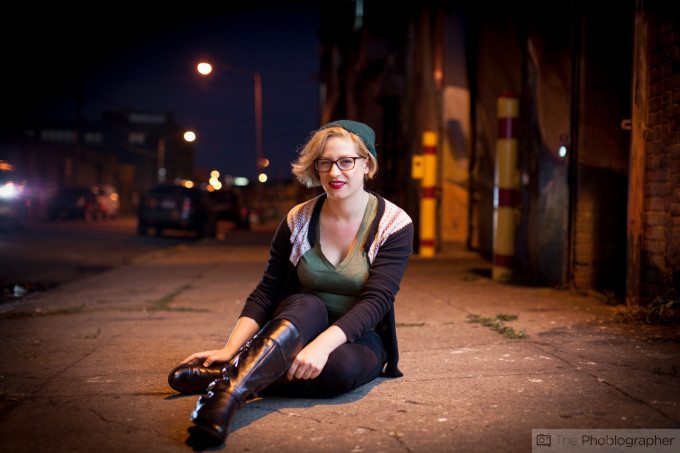