Mike Berube and His Poignant Vignettes of War-Torn Africa All photographs taken by Mike Berube. Used with permission.

Documenting conditions in a country at war or a poverty-stricken nation is possibly one of the hardest and most dangerous avenues of photography. And yet, a great number of photojournalists still go out there, armed only with their cameras and risking their lives to capture a certain reality that to many of us is inconceivable until we are presented with visual proofs.

One such photographer is New York City-based Mike Berube, whose powerful images of war-torn Africa, taken in the slums of Kenya in 2008, are but a small chapter in his poignant book that draws our attention to the horrible conditions that many people face and try to endure. From Africa to even Canada, Mike captures hunger, poverty, and war, with their victims serving as the main subjects of his photos.

The Phoblographer talks to the man behind the lens and he sheds some light on his work, his purpose, and how hard it is exactly to be a photojournalist in a poor country being torn apart by civil unrest.

Read his interview after the jump.

To see more of Mike Berube’s work by visiting his website.

Phoblographer: How did you get your start as a photographer?

Mike: I got started into photography mostly as a hobby. Every time I went skateboarding with my three brothers, my camera would tag along. My love of skateboarding drew me to photographers like Robert Frank, Henri Cartier Bresson, and Eugene Richard. The stories found in street photography and the exploration of every day life resonated with me, and I dove headfirst.

Phoblographer: As a photographer, you document as well as raise awareness on certain human condition and issues around the world. Was this an avenue that you specifically chose? Why? 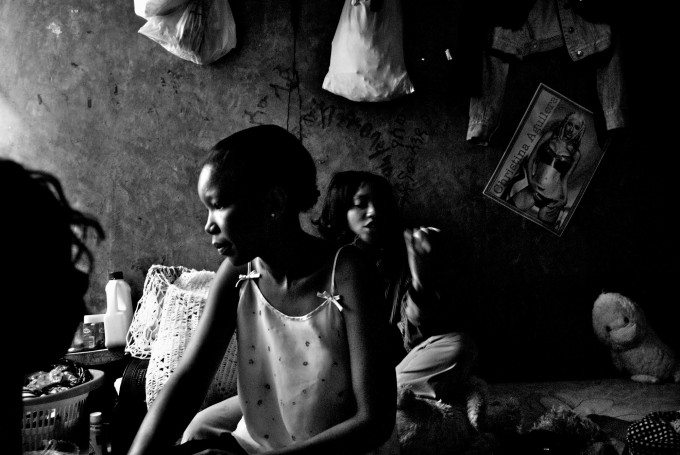 Mike: After a stint doing street photography, I partnered with National Geographic Society.  I was sent on assignment to San Miguel, Mexico to document daily life of Bull Fighters.  I quickly found other stories along the borders. The drug smuggling was getting out of hand and I wanted to document it.  Mexico opened my eyes to the power of photography, and it picked me up and tossed me into a world I never thought I’d ever see.

Phoblographer: Your series of vignettes of Africa is not only poignant, but also a very real and very graphic documentation of how life is in a war-torn place. Tell us about the series. Mike: I had been home from Mexico and had been working freelance off and on in New York City through Magnum foundation workshops and developing relationships with other photographers. I was young (20 years old), I was offered an opportunity to photograph the slums of Kibera, Kenya.

The slums are the size of Central Park but hold 2.5 million people. No running water and no electricity. I had stayed for what initially was supposed to be a month. The place kept pulling me in. I went back to document the drug and sex trade in the slums. I did this for about 3 years, living in a small town outside Nairobi. When the elections came, there was widespread of fraud and vote fixing. When the government announced that its previous dictator had won the election by a landslide vote (The UN later showed it was found to be fixed), widespread fighting broke out. I remember the night it happened because the sky turned from night to red. The fires spread quickly across the homes. Going in to photograph at night was like scenes out of a horror movie. The fighting in the beginning was very primitive. Machetes, Rocks, Knives, and Molotov cocktails. This later escalated into an all out war with airports shut down and a ban on journalists covering the war on the ground. In covering war, there are certain things you have to overcome and those are Fatigue, Hunger, Access, and Fear.

Phoblographer: Was it hard to take photographs of the victims? How about the militia? At what lengths did you have to go to get your images? Mike: If you want to connect with people who are in distress, you need to approach them in a certain way. I move kind of slow. I talk kind of slow. I let them know that I respect them, and the situation they have found themselves in. So people could see I felt for their situation and I was their voice to the outside world. Along with this comes responsibility to get the story right. People I’d developed relationships with before, and even go so far as to say friends, were being forced out of homes, raped, and killed by the military. By this point guns, military vehicles, and Flash Grenades were in full use. What you see and experience is very real, and things happen very quickly.

The risks I took to take pictures were at times were not at all in my favour. There were times other journalists would question what I was doing. However, I felt an overwhelming responsibility to let the outside world know what was being silenced by the diluting effects of mass media, fashion, and popular culture. I try to use whatever I know about photography to be of service to the people I am photographing.

Phoblographer: What was the most dangerous situation you ever found yourself in while there?

Mike: In a war there is no time for fear. Sometimes the fear was so great it would make me physically sick.  There was an incident that happened during the middle of the day on June 5, 2008. There were reports of a massacre sight and heavy fighting with in the Kibera boarder region. I ran into the street and hitched a ride with the military going in. I was one of 3 journalists going into this and we had no idea how intense it really was. When we arrived, it was a full military assault and the military were not only fighting the instigators of the crimes, they also began beating local women, children, and terrorizing families.

Once this was over, the military left us three journalists in the slum and drove off. We were run out of the slum and I had accepted the fact that I was going to die that day. There was a journalist that had a full breakdown and I had to carry him on my shoulder out. Eventually we made it to a local road and hitched a ride in a van and were out.

It’s not the frontline blood guts and gore that stays with me. It’s the emotional damage that you can do to some one or the repeated harming of someone sexually. The cries for help and the screams are defining. But in a war, all of the normal rules in life are suspended.

Phoblographer: Given the chance, would you go back and do it all over again? Why? Mike: Given the chance, yes I would go back again. It was part of a process of proving to myself that I could be a Photographer and that I was not using photography but rather photography was using me. My career thus far has changed my life and made me into a different person. The work I do has created a weight I now must carry, and I am responsible for that weight. So, I must channel it into my photography to make people stop and pay attention to what is going on.

Phoblographer: What’s next for you? Any upcoming projects we should keep an eye out for? Mike: Currently I just had a major exhibition open at the Robert McLaughlin Gallery. This exhibition is scheduled to be traveling very shortly so that is exciting. I currently have no projects on the go at the moment. I am not feeling overall very inspired at the moment. I am pitching a lot of projects at the moment and doing a lot of logistical work.  I am a photographer involved in what I feel are critical social issues. Moving forward I have partnered with Jeff Rideout and we have a few long term projects coming up, one of which begins with Cuba.