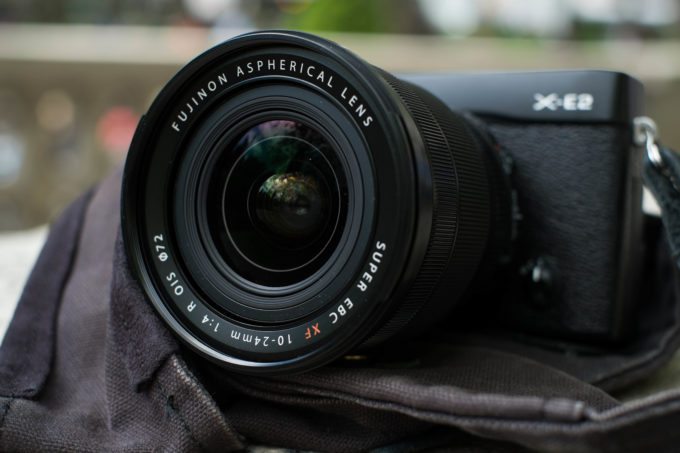 As the company’s first wide angle constant aperture zoom lens, we can expect lots of photographers that shoot landscapes and architecture to take advantage of its seven aperture blades and four aspherical elements. The company also incorporated optical image stabilization into the lens–one of the current few in the series.

But at a very steep price, we’re not sure it’s a lens that everyone needs.

– Fairly heavy. It works better on a larger camera like the X-Pro1 than the X-E2, its smaller counterpart. The font element of the 10-24mm f4 is almost as tall as the X-E2 is. The lens is fairly robust with a metal focusing ring at the front, a rubber zooming ring in the middle and an aperture ring at the back. The switches for image stabilization and aperture control are just behind the aperture ring. The lens will significantly weigh down the front of your camera, which is a considerable jump from lenses like the 35mm f1.4 or the 27mm f2.8 pancake. When it’s hanging around your neck, you’ll see the lens pointing towards the floor. The three rings are appropriately sized and the zoom ring has hard stops at both ends of the focal range. The focus and aperture rings are limitless. Fortunately, everything is contained, that is to say the zooming is internal which is a boon over the 55-200mm f3.5-4.8’s external zoom.

The lens handles well in just about any situation. Most of the time, I used this lens on the street, which is where I think it thrives. The wide perspective is a natural fit for urban environments. Just know that you’re dealing with heavier glass on a relatively small body. It pairs better with the X-Pro1, but it’ll still weigh it down.

Like all of Fujifilm’s lenses, the 10-24mm f4 is built like a tank and it’s in line with Fuji’s retro aesthetic. The barrel is all metal, save for the zoom ring, and this metal construction is part of the reason for its heft. It feels good in the hand, and the long barrel could lead some to think you’re shooting at a much longer focal length. The 10-24mm is larger than most of Fujifilm’s offerings, including the 56mm 1.2, though it pales in comparison to the 55-200mm f3.5-4.8. In most good lighting scenarios, the autofocus worked well with 10-24mm f4, and it was both quick and accurate. Yet, this lens doesn’t lend itself to poorly light situations because of its maximum aperture of f4. This is where manual focusing with focus peaking took over. Any shots I made at night were with done by manual focusing.

Set the aperture, adjust to your desired focal length, focus and shoot. While this lens does have three rings and two switches, it’s easy to use particularly because of its intuitive design when combined with any of Fujifilm X-series cameras. In my case, I used this on both the X-E2 and X-Pro1. Size also plays a factor here because of how big it is. It looks and feels better with the X-Pro1 than any other X-series body. When I had it on the X-E2, it reminded me of some Sony NEX units I’ve worked with where the camera was nearly dwarfed by the lens. Budget space in your camera bag accordingly for this lens. This lens produced great images with vibrant colors and sharp lines. This the kind of lens that has myriad applications, but it works particularly well with event and street photography that can often call for wider perspectives. In the case of Dance Parade above, the extra wide angle this lens provides is a major plus. At the longest end, 35mm enthusiasts will greatly appreciate the 36mm focal length this lens has on the X-series crop sensor.

Because of its max f4 aperture, this lens is a better fit for daytime photography. You can work well enough with it at night, but it doesn’t deliver the same results. You’d probably be better suited breaking even with the 18mm f2, which will let in far more light. It isn’t nearly as wide as the 10mm end, but it would suit your needs just fine. This lens doesn’t necessarily lend itself to bokeh unless you get super close, but if you can get super close , you’ll find that the bokeh is very, very smooth. In most cases, however, because of the nature of the focal range, you won’t find much bokeh to speak of, if you find any at all. When held against the likes of the 35mm f1.4 or 56mm f1.2, it’s not the sharpest lens in the camera bag, but you’ll find that with the right light, the 10-24mm f4 will produce sharp images that you’ll be more than happy with. This lens would work well for real estate photography when you’re trying to show as much of a room as possible without having to reach for a fisheye, not that you would ever do that. In the course of this review, I didn’t find any color fringing in any image. This lens certainly colors within the lines, so to speak, and that’s one less thing you’ll have to worry about in post. The 10-24mm f4 produces colors consistent with what you see in front of the camera. Colors tend to pop, producing a nice bit of contrast for your images, and it helps when you have a colorful environment. Buses with scenic routes often yield chromatically-rich photographs. As a solidified Fujifilm shooter with the recent acquisition of an X-Pro1, the 10-24mm f4 was a good lens to work with in that it forced me to get close. If given the choice, I’d have the 35mm f1.4 on all the time because of the stunning image quality and the 50mm field of view. The 10-24mm has pushed me to reconsider composition because a lot more can fit in the frame. It is, however, a heavy lens that will take up a decent amount of space in your bag, and it’ll weigh down on your neck.

Remember, too, that you’re limited to f4, so you’ll have to lean a bit on your ISO when you’re in poorly lit situation that’d be a breeze for an f1.2, f1.4 or even f2.8. Fortunately, X-series cameras tend to do very well at higher ISOs. I would, however, be hard-pressed to recommend this lens if you’re tight for cash and you already own the 18-55mm f2.8-4.

It retails for $999 which is the same price as the 56mm f1.2, which delivers far superior images. Of course, you need to figure out what you want for that much money. The 56mm is a beast in the studio, but it won’t get you that crowd shot or that street scene. If you find you’re out on the street more than in the studio, I’d suggest springing for the 10-24mm f4 over its price-equivalent 56mm. This would be a great lens on a second camera. If I owned a second Fuji camera, I could see this being a good complement to my 35mm f1.4.

You can pick it up at Adorama or Amazon. Fujifilm X-Pro1: The company’s flagship camera will give you great results at any time of day.

Fujifilm X-T1: The latest in the X-series lineup with the newest sensor will give you excellent results.

Fujifilm X-E2: The mid-range option will provide stellar results and help you keep a smaller profile.