The Samsung Galaxy NX30 was introduced at CES 2014 with a lot of fanfare by the company’s reps. Excited by the wide range of lenses and the growing lineup of mirrorless cameras, Samsung has truly started to make a name for themselves within the camera industry. The NX30, their newest flagship NX model, looks and feels strikingly similar to its predecessor, the NX20. However, the NX30 offers a few new features that might have Samsung enthusiasts singing its praises.

By now, Samsung cameras are synonymous with innovation. Samsung has had to fight its way into the market, but fight they have! Creating a camera that not only feels good, takes great pictures and has awesome features is not an easy task, but this camera company is doing just that.

The NX30 offers users a 20.3 MP APS-C image sensor, a new hybrid AF, top shutter speeds of 1/8000 sec, and 9 fps in continuous shooting even when capturing images in the RAW format. The AMOLED screen has gotten a big boost in resolution and the new, tilting EVF is an innovative feature. If you love sharing your images immediately, the camera offers both Wi-Fi connectivity and NFC. But the hefty price tag of about $1000 may have some camera buyers looking for less expensive options.

The Samsung NX30 looks and feels similar to its predecessor, the NX20. It has nearly the same DSLR feel. However, Samsung gave the NX30 a deeper grip, which makes handholding it for long periods of time a more comfortable experience. This is great if you want to own a mirrorless camera that mimics the ergonomics or a DSLR. However, if you are looking for the compact form factor of other mirrorless cameras, you will need to look elsewhere. This camera is a big guy in the mirrorless world. His body shape is a closer relative to the Canon SL1 or the D3300 versus the Olympus OM-D E-M1 or the Sony A7r.

The company has changed little about the camera’s tactile experience from the NX20 besides the top deck button placement and one pretty major element–the tiltable EVF. The EVF can pull out, which is OK, but it can also tilt up to 80 degrees, which is way cooler. Although this is a really cool feature, I found myself using the EVF way less than I thought I would. But more on the EVF later.

The NX30 houses most of its external buttons on the back, right side of the camera. The top of the camera offers a mode dial, drive switch, video on/off button, shutter button, camera on/off switch, exposure button, and Wi-Fi button. A hot shoe is also located above the pop-up flash.

The NX30 has a flipable, tiltable 3-inch AMOLED touchscreen. The screen swivels 180 degrees and rotates 270 degrees. The screen is bright and the resolution is good at 1,037k dots.

If you are looking for a mirrorless camera in an extremely lightweight, DSLR style body, this camera’s perfect for you. The camera has a polycarbonate shell over a metal alloy frame. The NX30 doesn’t feel as solid or heavy as the Sony A7r or even the Olympus E-M1, both of which are smaller cameras. However, the camera’s lightweight feel can be hard to get used to if you have been shooting with DSLRs. Even with the included kit lens attached, it feels remarkably lightweight.

But don’t take this big guy out in the elements. The NX30 is not weather sealed, nor is its lenses.

The Samsung NX30 offers usability that come naturally to most. The camera has a ton of physical buttons that make changing its settings quick and east—even for those experienced photographers that like to shoot in manual mode, aperture priority or shutter priority.

Learning the menu system in the NX30 will take a bit of practice, but the camera is not too menu heavy. In fact, the menu is pretty straight forward. It won’t take long to figure out where the most used functions are.

The new tiltable EVF is an ingenious little feature. It’s nearly reminiscent of Hasselblad film cameras with their waist level viewfinders. A tilting EVF is not a brand new idea for digital mirrorless cameras. This is an option that Olympus recently made available as an optional EVF attachment, but Samsung went one further by building this option directly into the camera.

Earlier I said I didn’t use the EVF much and that’s true. As innovative and convenient as it was, I still generally used the AMOLED touchscreen instead. However, I will say that the EVF came in handy several times where there was just way too much glare coming from the screen while shooting outside. Although the screen can be adjusted for brightness, I still found the screen to have a ton of glare when used outside. Otherwise, while shooting inside, the AMOLED screen was crisp and beautiful.

The camera offers Wi-Fi and NFC connectivity. Both options worked well and were able to transfer images quickly and easily.

The camera’s autofocusing is pretty fast and generally very good. The NX30 has 105 phase detect points and a whopping 247 contrast detect points. In most situations I had no trouble grabbing focus in nearly every situation. The only time I had trouble was when I wanted the camera to grab focus on a specific point, namely a branch on a tree. I had the camera’s focal point set to center point focus. I was close to my subject. There were other branches in the frame. Although I tried very hard to grab focus on a specific branch, the camera was determined to focus on a different branch within the same focal area. I tried to refocus numerous times before I just gave up. Although this experience was frustrating, it was rare.  In a wide angle situation, the camera had no trouble. Also, in a close up situation with a prominent subject the camera also did not have any trouble focusing.

That being said, I generally only have this type of focusing issue in Samsung cameras. The Samsung Galaxy NX and the NX20 also struggled with this same issue.

According to the rules of Sunny 16, the Samsung NX30 meters correctly. We found no issues with the metering system. Images in this review were taken with the 18-55mm f3.5-5.6 OIS lens that is included with the kit. The lens is good, but not my favorite Samsung lens. I generally prefer to shoot primes with wide open apertures. The 18-55 lens is not the sharpest, not the fastest lens sold by Samsung. That being said, this lens is acceptable for photographers looking for a medium zoom focal length. The camera offers the same sensor found in the NX300, so it stands to reason that the image quality would be just as good. And it really is just as good. Colors are vibrant, contrast was on par and the sharpness on the imagery was very good. High ISO performance from the Samsung NX30 is similar to that of the NX300. In fact, at 3200 it’s still really good. But if you try pushing the ISO over 6400, things get a little muddy. Shown below is an image taken at ISO 3200. The results are typical of what you see in APS-C sensors. There is slight noise (seen mostly in the right top corner, only a slight amount of detail loss and very little pixel softening. 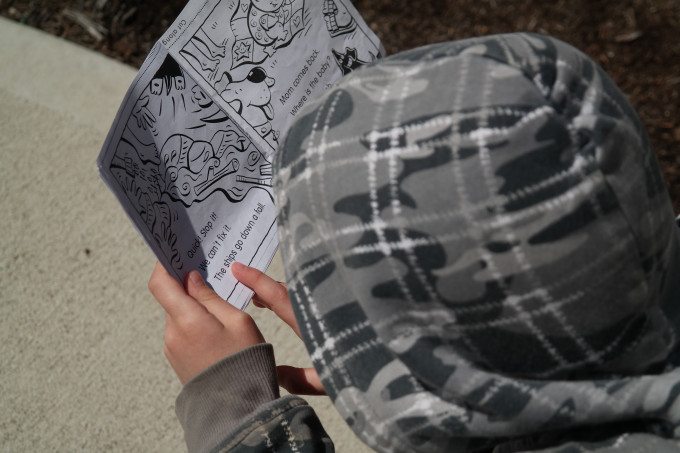 The Samsung NX30 is a noteworthy mirrorless camera masquerading as a DSLR. If you love the feel of a DSLR, but prefer the maintenance and lightweight nature of a mirrorless camera, then the NX30 is worth it. The new SVF functionality is a cool feature—especially if you enjoy looking down into the viewfinder. The image quality is very good to great. Given a better lens, I believe the images would have been superior to these. – Samsung 85mm f1.4: This is one of Samsung’s best lenses and excellent for shooting portraits. We strongly recommend that you get attached to it. See our review.