The Basics of Photography: K for Kodachrome We continue our series on the Basics of Photography with the letter K, and today’s subject is Kodachrome. Now, some of you will undoubtedly wonder why anyone would deem a discontinued slide film basic photography knowledge. But the answer is really rather simple: Kodachrome was probably the single most influential photographic medium of all time, and it played a significant role in shaping the face of modern color photography and photojournalism. In this article, we’re going to take a look at the rise and fall of this film, and explore the photography that was created with it.

Introduced by Eastman Kodak in 1935, Kodachrome was the first commercially successful photographic film to make use of the subtractive color reproduction method that later became commonplace in photographic films. However, unlike later transparency films such as Agfacolor, Kodachrome film didn’t include any dye-couplers which are responsible for giving the resulting slides their color. Instead, the color dyes would be added during processing, which made developing Kodachrome film a very complex procedure. The basic recipe of Kodachrome stayed the same throughout the time, but the legendary Kodachrome 64 film that was used extensively by photojournalists such as Steve McCurry was only introduced in 1974. It had a moderate ASA speed rating of 64, and was thus best suited for daylight photography. In fact, Steve McCurry once said about Kodachrome that “if you have good light and you’re at a fairly high shutter speed, it’s going to be a brilliant color photograph.”

What made Kodachrome so famous, despite the fact that it was the first readily-available color film emulsion, was its color reproduction. To quote Steve McCurry once again, “it had a great color palette. It wasn’t too garish. Some films are like you’re on a drug or something. Velvia made everything so saturated and wildly over-the-top, too electric. Kodachrome had more poetry in it, a softness, an elegance.” 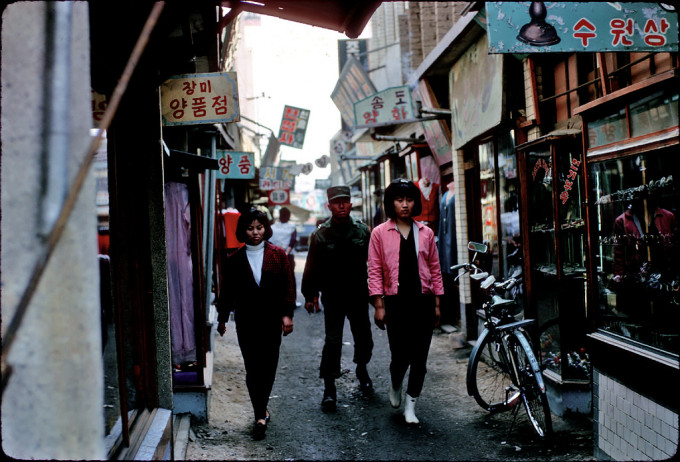 In fact, Kodachrome’s color reproduction was held in such high regard that when Leica developed its first digital rangefinder camera, the M8, the sensor was specifically developed to mimic the look of Kodachrome film. And when looking at the photographs of McCurry and others that used Kodachrome, it is easy to see why. It even got its own song in 1973, when Paul Simon sang about its “nice bright colors.”

With the introduction of the much simpler E-6 process that was used to develop films such as Fujichrome and Agfachrome, Kodachrome slowly came out of fashion in favor of the more modern slide films. The final nail in Kodachrome’s coffin was the advent of digital photography, so that in the early 2000s the different versions of Kodachrome were successively discontinued. The last survivor, Kodachrome 64, ceased production in 2009, and the last roll of Kodachrome was developed by Dwayne’s Photo in Kansas in 2010. With the end of Kodachrome also ended an era of photography. Being the first readily-available color film, Kodachrome helped shape the face of modern color photography. It was used by many of National Geographic’s photographers to capture their colorful photo series, and it was a favorite among photojournalists who weren’t looking only at an image’s content, but also at its colors. But despite being discontinued, its legacy lives on.

Today, there are many film simulation softwares available that offer Kodachrome presets for your digital images, trying to mimic the film’s unique look. While that might be a task impossible to fulfill, it shows just how popular, influential and important Kodachrome was for the photographic world. Without it, while photography would surely have made equal progress, it may just not have been the same.