Phoblographer: Lots of photographers aspire to be able to tour with their favorite bands or artists and shoot with them on the road. And you essentially lived the dream of many. What were your first in person interactions with the band members like? 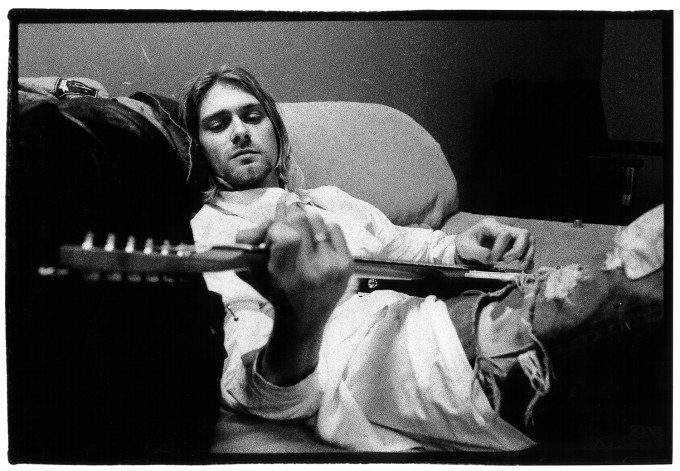 Steve: Great – we were all there to do a job we loved… Nirvana were very accommodating, respectful and humorous. Phoblographer: Those photographers that had the opportunity to photograph Kurt all say that he was an extremely nice man. What did you think? Band mates traveling together on the road have to at times have moments where they break down? And what about Krist and Dave?

Steve: Kurt was a lovely man, as are Krist and Dave. They were close and looked after one another like brothers. They were also close with their crew – Alex McLoud was their tour manager for the duration of the time I shot the band. Phoblographer: Kurt always had this almost unpredictable stage presence. What was that like for you as a photographer to be able to just react to his body language?

Steve: That was the score back then – I worked with a lot of primal punk rockers. I think if you love and understand what’s going on, synchronicity takes over – I was fast, fit and ready for anything. I wouldn’t claim to do it better, but I was and remain a die hard music fan. It was always music first, photography second. I was also always happy in the pit. Getting pulled, walked on, kicked and punched was just part of the job. Phoblographer: Many people talk about what it was like for the band, but what about you as a photographer? You’re out there touring with them. What was it like for you? Would you do it again?

Steve: I’ve never toured intensely like bands do, I’ve only ever done a few days at a time. Remember, I had stories to turn in, and that didn’t involve an hour on Capture One & photoshop with a beer and a wi-fi connection. It involved film processing and darkroom printing. I have been known to use hotel rooms as darkrooms and I often worked all night and delivered the prints in the morning.

Generally, my presence on a tour bus has been fun. Bands enjoy a new face to break up the monotony of travel. Nirvana was no exception. Their bus was a place for quiet contemplation and a place for a great party.

We ended one evening with a party on the tour bus. which involved us watching Frogs and Queen videos. Krist awarded me the prize of a bowling ball and a piece of smashed TV screen for having pulled off the best Freddie Mercury impression.

Phoblographer: Who among the band members did you feel closest to and what about them made you warm up to them specifically?

Steve: That’s like asking me which of my three sons is my favorite. I love them all equally.

Phoblographer: Given the way that the band was going when you were shooting them, if someone had told you that Kurt would commit suicide and Dave would go on to form one of the most influential alternative bands around, how would you have reacted? Steve: I deal in reality. Kurt’s suicide is a very sad and upsetting fact. Dave has always worked hard and is an unstoppable, creative and lovable bloke. The success of Foo Fighters is well deserved and unsurprising to me.

Phoblographer: Between traveling and shooting, how did you manage your work with film development, sending negatives, archiving, etc?