It’s been a while since Samsung first announced their NX20 camera–and today it’s finally receiving a refresh. Considering what Samsung has been doing to change the innovation game as of late, it only makes sense that they are putting a lot into their new flagship NX series camera. And while we’re talking about a lot going into it, one core feature is the same. It houses the same 20.3MP APS-C sensor as previous cameras but with a bit of modification. But otherwise, the camera has weather protection, WiFi built in, and lots of cool modes that play well with the mobile world. 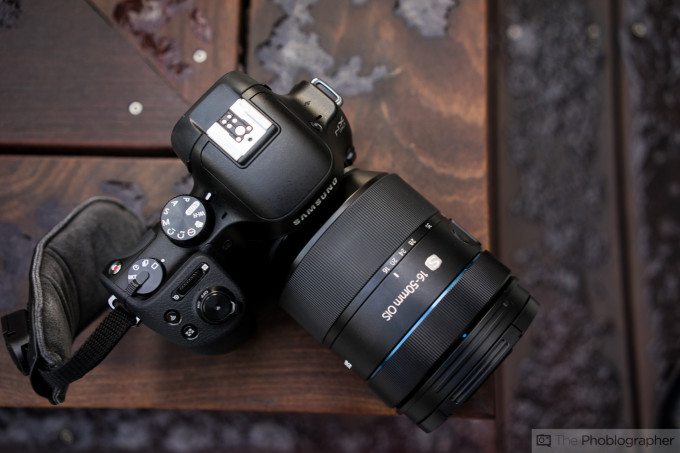 Samsung’s NX30 is a camera that more than anything, mimics the look of a small DSLR of some sort. It could be likened mostly to the Panasonic GH3 or something like a Canon Rebel SL1.

The camera is almost devoid of controls on the front with the exception of a depth of field button and a lens release. The top of the Samsung NX30 has a couple of the key controls that you’ll need to get a handle on the camera. For starters, there is the mode dial, the drive switch, the video record button, shutter release, on/off switch, and the hot shoe. One of the camera’s exposure controls is also on the top. As you turn to the back of the camera, you’ll see even more controls. Here you can find another exposure dial (Canon DSLR style) and lots of other control buttons. But by far, the main attraction is the big, beautiful EVF.

Oh yeah–and there’s this massive LCD screen that can tilt. On of the other cool things about the EVF is that it can pop out a bit. But then it can also do this. Huzzah! No one else in the industry has done this yet and it’s seemingly brilliant. Also introduced today is Samsung’s 16-50mm f2-f2.8 OS lens–it’s quite a heavy optic and also a beastly feeling one. The lens has weather sealing incorporated in it–which tells us that Samsung is prepping to go after a more serious crowd soon. Though we only held the camera for maybe around seven minutes max, we are quite impressed with the way the camera feels. It’s leaps and bounds better than the Galaxy NX camera in terms of feel and in many ways combines aspects of high end APS-C DSLRs and puts it in a smaller package.

Indeed, this camera feels like the Nikon D7100 of the mirrorless camera world.

There are lots of buttons, dials and a working touch screen for the user to get to exactly what they need. If you’re brand new to Samsung products, you’ll probably take some extra time navigating the ropes. But doing anything that you really need to in order to take a photo is extremely straight forward.

There are lots of things that you can do with the NFC connectivity as well as sharing to multiple devices. Some of the combinations of things that we saw kind of blew our minds.

We were handling pre-production units, so we weren’t allowed to put a card in. The NX300 had a pretty good sensor that was improved when it showed up in the Galaxy NX. It will be even more interesting to see how much Samsung did with nearly the same technology.

We haven’t spent a lot of time with the NX30 yet, but so far it’s gearing up to be quite the camera. And if this is any indication of what the future from Samsung may be, we’re quite excited.

We’re waiting on our review unit to come in, so stay tuned.