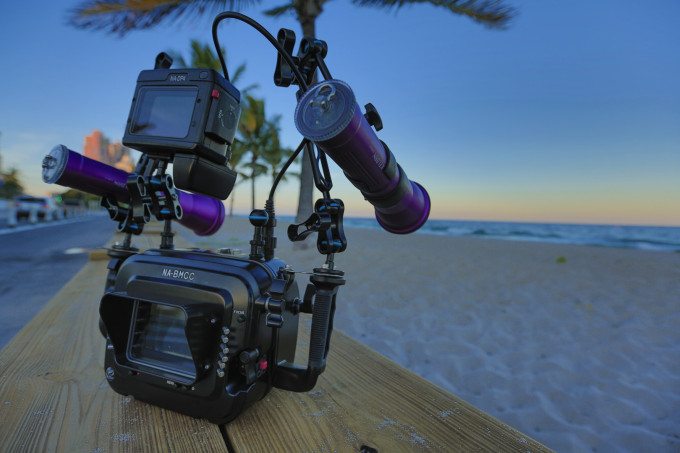 Unless you’re James Cameron on the hunt for the Titanic and or Amazon’s Jeff Bezos looking for NASA Apollo rockets, you’re probably not going to bring multimillion-dollar submarines to comb the sea floor. But for you aspiring National Geographic underwater photo and videographers, at least you’ll be able to bring your camera. Nauticam has two new underwater housings, the NA-BMCC and NA-BMPCC for Blackmagic 2.5K and 4K cameras, as well as Pocket Cinema Cameras.

Technically speaking the NA-BMCC has already been around for nearly a month, but Nauticam announced a new version with additional features. The Electronic Vacuum Check will make sure the camera is truly sealed from the elements and the Leak Detection System to tell you when water starts coming in. Otherwise the housing is still the same underwater envelope built for the Blackmagic Cinema and Production 4K Cameras.

Nauticam’s other new addition is the NA-BMPCC made for the smaller Blackmagic Pocket Cinema camera. Like its bigger brother, the BMPCC is rated for diving down to 100 m (or 330 ft) depth rating. The shell is also fitted with an assortment of switches, buttons, and dials to mechanically operate the camera’s zoom and focus through internal gears.

Both of the underwater housings are available to order now from several online retailers with the NA-BMCC priced at $3,600 and the NA-BMPCC for $1,800. Check out more product images after the jump.