“You’re not going to want to send it back,” said PCMag.com’s Jim Fisher, a good friend and colleague of mine who remarked about the Zeiss 135mm f2 when I told him that I got it in for review. Though Jim and I are different types of shooters, I didn’t realize just how correct he would be when I first twisted the luxury optic onto my Canon 5D Mk II.

Despite the fact that we’ve still tested pricier lenses on this site, Zeiss’s 135mm f2 exudes an aura of absolute allure and lust. With an all metal exterior build, uber smooth manual focus ring, Zeiss micro contrast, bokeh worth biting your lip to, and the feel of a real professional lens–the only thing that you’ll need to sell for it is your soul, a kidney, maybe a finger, and perhaps a couple vials of blood.

– Amazingly not that heavy

– The lens hood makes the lens look significantly larger than it really is.

For this review, we tested the Zeiss 135mm f2 with the Canon 5D Mk II as our primary camera. We also used it in conjunction with the Phottix Odin wireless flash transmitter and the Mitros+ flash units. Zeiss’s 135mm f2 is a lens that can become quite long and lengthy due to its focusing range. With a minimum focusing distance of a little under three feet, it will surely telescope out a bit and look even more deceiving when the lens hood is attached.

The lens also features an all metal exterior along with some things that make it both simpler and more complicated depending on what type of shooter you are. When the hood is removed, you can see that the size of the lens doesn’t look as gargantuan as one might initially think. Some might even think that the hood makes it look obnoxious. At the front of the lens is the filter thread–which is once again made of all metal and designed in such a way that screams out that it is a luxury optic. Keep in mind that this is the end that your subjects will be staring into. The lens’s exterior is characterized by a massive manual focusing ring and a working depth of field scale. In fact, this is the only telephoto prime that I’ve seen with a working scale. Unfortunately, to follow it to the best of your ability, you’ll need to start out by stopping down to f11.

Otherwise, just try to rely on your camera’s focusing confirmation. 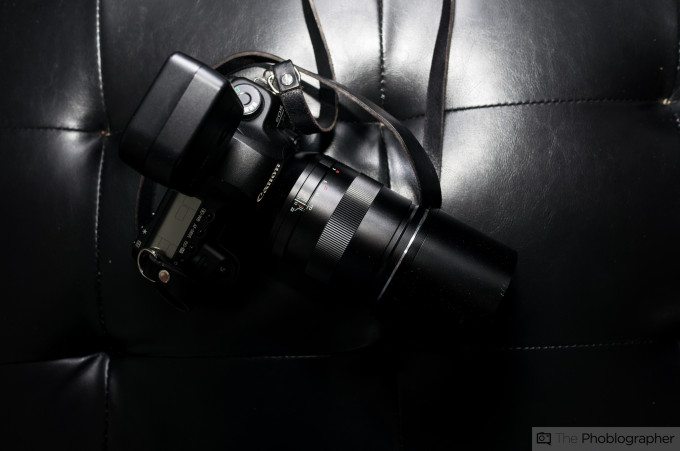 The exterior is all metal. It feels like nothing else but pure perfection in terms of build quality. Zeiss decided to go with an all metal build vs making the focusing ring out of rubber the way that they did with their initial Touit lenses. They did this for the reason that their customers complained that the rings were too cold to handle in cold weather due to the all metal build.

In the midst of NYC October, we had lots of summer-like weather but also some quite frigid fall days and night. We didn’t feel that the metal ever got too cold to the touch. How to Use a Zeiss Telephoto Lens:

For the best results though, we’re going to recommend using a tripod. Manually focusing a telephoto focal length can throw off the plane of focus due to all the movement involved.

To focus this lens, you’ll need to turn the manual focusing ring. By its nature and design, a 135mm f2 lens is meant to capture headshots. If that’s what you’re trying to do, then we seriously need to recommend using a tripod. The reason for this is because as you focus the lens, it will move the camera and therefore the focusing points. In real life practice, just when you think that you’re focused on the eye, you might actually be focused behind the eye or a cheek instead. We’re going to flat out honest, this is a Zeiss lens. The image quality that your camera will yield from having a lens like this attached will be nearly untouchable by anything else out there in the market. The sharpness, bokeh, and color rendition will be unmatched.

At this point, we’ve run out of adjectives without sounding borderline creepy. When we first started posting sample images from this lens, we had a comment about lenses being too sharp actually aren’t always desirable because of just how much extra detail can be brought out. While the person stating this comment has a point, we have to counter argue that if you’re purchasing a Zeiss lens, then you also have the budget to pay a retoucher.

The sharpness of the Zeiss 135mm f2 cannot be matched even by Canon’s own 135mm f2 L or Sony’s 135mm f1.8. Granted, you’ll need to stay super still when trying to manually focus it as we’ve stated many times in this post.

The lens is sharp wide open and when stopped down f3.5, you probably won’t even want to bother stopping down beyond that because you won’t ask for anything better from the performance. However, stopping down to f4 or f5.6 will give you marginally better performance.

For what it’s worth though, you might really just want to shoot with the lens wide open if you’re doing headshots. Because of the focal length and the compression, all that will be in focus is just the eyes.

Professionals everywhere will totally digg the results that you’ll get from this lens and the fact that the images yielded from it are so good combined with the fact that you’ll be slowing down your shooting process to concentrate on creating better images is a win/win situation. You probably may end up shooting less images than you would with an autofocus lens.

Although we’re usually against pixel peeping, we would recommend doing it with this lens to ensure that you nailed the focusing on the right spot–and to also obviously make you a believer.

Adding a flash into the mix will only make things even sharper due to the way that specular highlights work in image creation. If you’re working with an APS-C DSLR, then you’ll render even more details due to the tightly compacted pixels. To that end, if you’re shooting with something like a Nikon D800E, you’ll also see just how much extra details will be pulled out.

Lastly, consider the fact that Zeiss puts micro-contrast in all their DSLR lenses. There isn’t a ton of it here though–because it doesn’t need it. Out of the camera, we found the Zeiss 135mm to render images a bit too much on the cool side of the spectrum for our liking. However, that isn’t a major problem because Adobe Lightroom allows you to change your white balance and hue quite easily.

This also applies to working with skin tones and also working with flashes. Every time I shot Grace, I had to tell her, “This isn’t what the final image will look like,” when she chimped the camera’s LCD screen. There is a very negligible amount of fringing from this lens–and any that you find will only be in the absolute most extreme of shooting and lighting conditions. Once again though, this is easily corrected in Lightroom.

You know what’s awesome? Bokeh. And Zeiss is quite often the king of the castle when it comes to true bokehliciousness. The 135mm f2 is no exception on this one. Were you really expecting anything else?

The Zeiss 135mm f2 is an absolute dream when it comes to portrait lenses. It is sharp, contrasty, produces beautiful bokeh, and has an excellent build quality. But in the end, it is still quite expensive. However, if you can save up for it and justify the purchase to yourself, you won’t be sorry at all despite a couple of other needs when it comes to focusing.

The Phoblographer awards the Zeiss 135mm f2 an Editor’s Choice Award for the best portrait lens ever–and if you decide to spring for it, you won’t look back at anything else. But we recommend that you rent it through BorrowLenses.com before you make the purchase.

Nikon D800- The king of the high megapixel full frame cameras is an obvious choice for using this lens. Just be aware that you’ll become addicted to what it can do.

Canon 5D Mk III- Canon’s current edition of the 5D series is an excellent choice to use with this lens due to the plethora of focusing points and ergonomic handling.