The Leica D-Lux 6. Word has it this a Leica took the Panasonic DMC-LX7, did some things to it, and made the D-Lux 6. It’s a curious move, but I have not used LX7, so I can only speak about Leica’s offering. It is a tiny camera that packs a 10.1MP 1/1.7″ CMOS sensor with a 4.7-17.7mm (24-90mm equivalent) f/1.4-2.3. The D-Lux 6 is smaller than my hand, and my time with it was a study in delicacy. More often than not, I looked like a grizzly bear trying to get my paw into a jar of honey that was too small. That’s not to say it isn’t a fine camera, it is a very fine machine, and one that I will tell you about throughout this review. Let’s go.

-The LCD
-No grip of any kind
-Slow zoom

For this review, we used the D-Lux 6 with a husky photographer.

On the front of the camera, you’ll see the nifty Leica logo, the self-timer/AF-assist lamp, the lens and aperture ring, and the tethered lens cap. Whenever you turn on the camera, you are prompted to remove the lens cap and press any button. As you can see, it’s super sleek, and there’s no grip of any kind. On the top left-ish end of things, you’ll find the flash and its switch, as well as the hot shoe for an EVF, and more importantly, a clearer view of the aperture ring, aspect ratio slider, and AF, Macro, and MF slider. With a variable aperture throughout the zoom range, the aperture ring did prove to be a point of confusion. The aspect ratio slider was an interesting addition, but I kept it on 3:2 throughout my time with it. 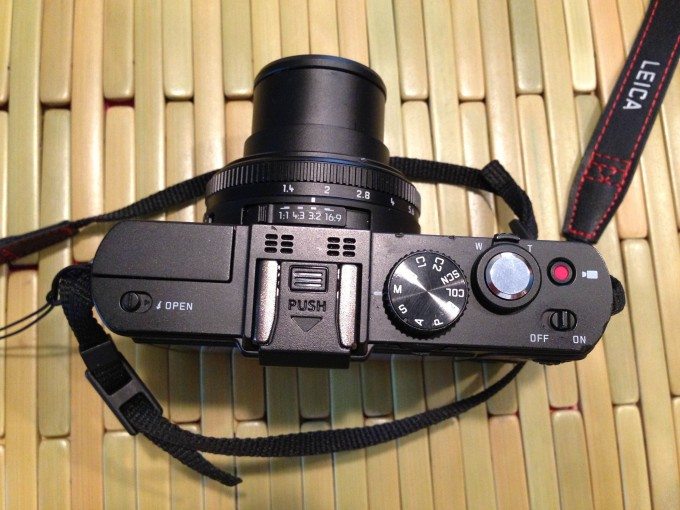 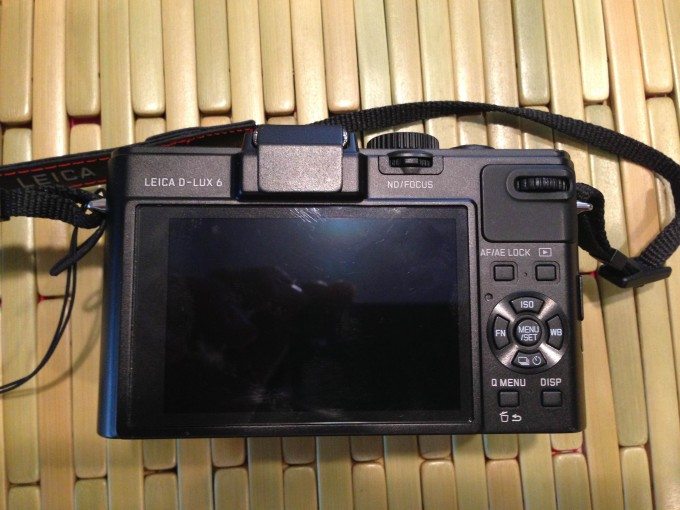 Here’s where the magic happens. Most of the real estate is occupied by the LCD which I will dedicate a paragraph to later. Up top, you’ve got the ND/Focus lever, and due east, you’ve got a wheel that can be used for adjusting the shutter speed and moving through menu items. Below, there’s the AF/AE lock button and the playback button right next to it. The menu button sits in the middle of four directional buttons, each with its own function. ISO to the north, Function to the west, Serial exposure & Timer to the south, and White Balance to the east. To the southwest, there’s the quick menu button, and the display button sits to the southeast. You’ve got the dual battery and SD card compartment. There’s also the tripod thread and speaker, a series of four small holes. And here you’ve got the HDMI port and AV OUT port. A little flap covers and protects the ports from dust and anything else. And finally, for reference: my hand and the D-Lux 6. I know small cameras are all the rage, but I haven’t used one in ages. My kit is comprised of a Sony a580, eight Minolta lenses, two Lensbaby lenses, and a Samyang 85mm. I’m not used to this small form factor. That’s not a knock against the camera, though.

While the D-Lux 6 is small, it is not lacking in build quality. This thing is dense, and while it feels like it could withstand some rough-and-tumble photographing, I wouldn’t chance it. I’m a lion guarding his pride when it comes to my camera equipment, and cameras on loan are no different. The D-Lux 6 is made of metal, and it has a satisfying weight. I do wish, however, that there was some sort of grip, perhaps some textured material or something. I know it’s a Leica, but they could make it work. For most of the review, I left it hanging around my neck, and there was never any issue there.

This is not in the M line, so AF is on the table here. While I am a major proponent of manual focusing, I left the D-Lux 6 in AF or Macro AF, depending on the subject, nearly all of the time. Manual focusing is handled with the ND/Focus lever on the back below the mode dial, and when you push the lever left or right, the LCD displays a magnification of the center of the frame. The nifty phrase “MF Assist” sits at the top left of the screen while you try to discern what’s in and out of focus. I’ll spell out the usefulness of the LCD in the next section.

If you’re in Manual mode, everything’s fairly easy to reach with regards to the essential settings: ISO, WB, aperture, and shutter speed. I found that the buttons were a bit to cramped for my paws to change settings on they fly, so I settled for P 50% of the time. For the other 50%, I’d keep it in M at a set stable of settings if I was in one area for a certain period of time. I quickly learned, however, that I could not rely on the LCD to be an accurate judge of the images I was taking.

It’s been said elsewhere with previous M models that Leica’s LCDs need an overhaul, and it’s no different with D-Lux 6. The resolution in most instances was reminiscent of a flip-phone from the mid-2000s. The screen has 920,000 pixels. My two year old a580 has roughly the same amount of pixels in its rear LCD screen, and the images look far better there than they do on the D-Lux 6’s screen. Focus on composition when using the D-Lux 6 and check the quality of your images when you get to your computer. I was initially dismayed when I immediately reviewed the photos in the camera after taking them, but I heaved a sigh of relief when I ported them into Lightroom. The D-Lux 6 can take some very nice photos, but you need to treat like a film camera most of the time. Trust your photographic instincts as the LCD can be immensely frustrating. Seeing as the D-Lux 6 only goes up to f8, I couldn’t conduct a proper Sunny 16 test, so I ran a Sunny 8, and the camera metered perfectly. I’ve already gone into how the LCD can be tragically deceiving. You’re better off ignoring it in favor of viewing the images later in Lightroom or whatever you use for post. The D-Lux 6 can take some truly beautiful images with colors abound, given the best light of course. All of the sample images in this post were scaled down for the web. I did not adjust them in Lightroom so as to show the camera’s capabilities. The D-Lux 6 is no joke, and its lens combined with its smaller sensor can do some very nice things. I left the camera in AF, as I found the LCD too troublesome to make much use of the MF option. Besides, I favor rotating a focus ring over pushing a lever to the left or the right to focus on a subject. The AF worked in nearly all instances, and rendered some very sharp images. I was pleasantly surprised when I loaded the images onto my Mac. The D-Lux 6 does have a macro focusing option on the lens barrel, and it works nicely. I’m not much of a macro shooter, but I do think this can come in handy for such shots when a bigger rig would prove too cumbersome.

I found that the RAW files played nicely in Lightroom 4.4 for a point and shoot, but keep in mind that this is still a point and shoot camera with a small sensor. So if you’re used to a DSLR, then you won’t be satisfied unless you go for a larger sensor. With that said though, I didn’t really feel a need to do very much editing to these images. My time with the Leica D-Lux 6 was brief, but it was enough to help get me past my initial reservations. I should mention again that I come from a big rig. I am not a compact camera user, and while I have thought about getting a compact camera, I haven’t actively pursued that route. The D-Lux 6 has shown me what a compact camera with a super-fast lens can do, and while my largest gripe is the LCD screen, I can partially forgive that given what the camera can produce. I should also mention that the battery life is wonderful. I charged it once during the review period, and took several hundred shots.

The D-Lux 6 is nearly double the price of the Panasonic iteration, but it comes packaged with Lightroom and a superior warranty. For my purposes, it is not a camera I need, nor is it one that I can wholly rely on, given the nature of the screen. I do think, however, that the D-Lux 6 will benefit the artistic type who puts great effort into composing images, and can wait until the images are loaded onto a computer. Conversely, it could also benefit the traveler who wants to take pictures of beautiful vistas. Even wide open, the lens can do gorgeous things.

The Leica D-Lux 6 is a game of trade-offs with the biggest reward being the lens and its images.