Last week, we got to have some quality fondling time with the brand new Zeiss 12mm f2.8 Touit lens on the Fujifilm X Pro 1. The lens is one of the first entries that Zeiss has made into the mirrorless autofocus lens market. Like all things Zeiss, the company is not only putting image quality first, but they’re also trying to think a bit different in terms of build quality. In our meeting with Zeiss, they also clearly stated that they are targeting the high end user.

And with the price tag of the 12mm f2.8, they really seem to be doing just that. The Zeiss 12mm f2.8 looks like what may be one of the most high end lenses for the mirrorless camera systems so far. While Fujifilm and Sony both have some beautiful and very high end looking lenses, they can’t quite totally compare to the offerings from Zeiss. First off, note that this lens and all modern Zeiss lenses are made in Japan And you’ll see this branding on the bottom.

Editor’s Correction these are not made by Cosina, but they are made in Japan. Zeiss is stating that they are working closely with a couple of companies. 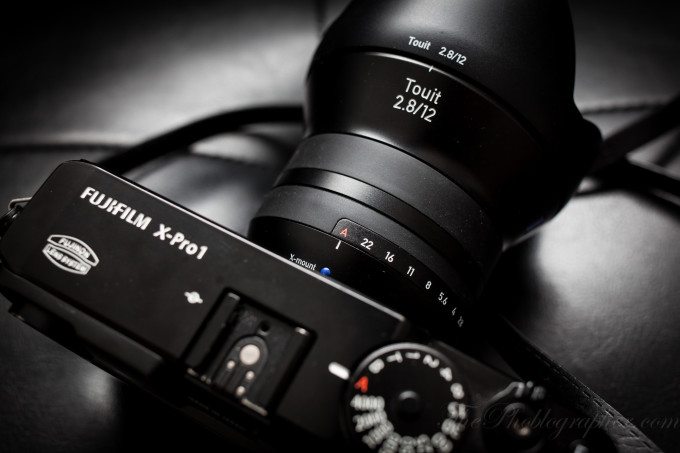 The 12mm f2.8 Touit has two rings: one for focusing and one for aperture control. The rings are made from rubber and have been cited by Zeiss as being better for focusing and turning in colder weather without having your finger tips freezing. The lens for Fujifilm has an aperture ring but the lenses for Sony don’t. The aperture will go from f2.8 to A mode–which means auto.

At the other end of the aperture ring is f2.8: and it stops with a hard click. In order to get there, you’ll be moving in thirds of stops instead of whole stops, so you’ll feel the clicks throughout the range. The front element is also quite large–and it needs to be since this is also one of Zeiss’s widest angle lenses. On the X Pro 1, it has an 18mm field of view: which is really wide. 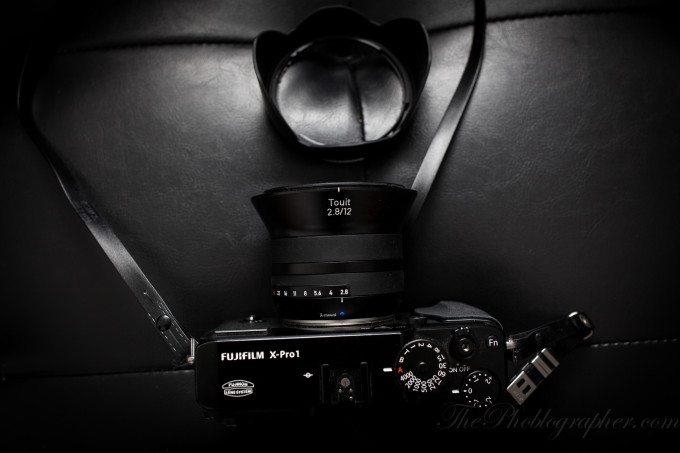 And protecting that front element is a removable lens hood made from plastic. When the hood is removed it cuts down the overall size quite a bit.

If you’re used to Zeiss’s DSLR lenses, you’re in for a new experience.

Editor’s Correction: This lens is made from metal and glass. We stated plastic, but this is wrong according to Zeiss. However, this doesn’t feel like any metal that we’ve felt before.

This lens is much easier to use in autofocus mode than in manual mode. In manual, you’ll need to use the depth of field scale in the viewfinder or on the back LCD of the camera. Zeiss has been known to put depth of field scales on their lenses and considered doing so with the Touit lenses. However, they chose not to do it for these two.

Zeiss told us that that may change in the future though.

Autofocusing with the 12mm f2.8 is snappy and perhaps even faster than with Fujifilm’s 14mm f2.8. However, it is faster on Sony’s camera”s than Fujifilm’s–but this has to do with the focusing algorithms instead. I did a little bit of shooting with the lens so far and even paired it for use with an off-camera flash. The images were very slightly edited in Adobe Lightroom 5 with no sliders being moved more than 5 levels. However, for the image above, we used Adobe’s upright feature. The images are already very sharp, but only in our full review will we be able to fully put the optic through its paces. Here are some more test images. So far, we really can’t say much terrible about the Zeiss 12mm f2.8. It has excellent color rendition on the X Pro 1, is sharp, focuses silently and snappily, and is really small for what it is.

However, we’ll have to make our final judgements in our full review.

Editor’s Correction: This lens is made from metal and glass. We stated plastic, but this is wrong according to Zeiss. However, this doesn’t feel like any metal that we’ve felt before.