Earlier this month, we were able to spend some personal fondling time with the highly rumored Canon Rebel SL1. Yes, it’s true. It’s tiny–it’s really tiny. Canon specifically stated in our meeting that they’re targeting this camera towards women and it will be available at retailers everywhere–even Walmart.

As far as specs go, this lil’ DSLR seems to be even better spec’d than its bigger brother–the Canon T5i (also announced today.)

– Hybrid CMOS AF II, which is one of the major upgrades to the new sensor

– 80% of the sensor has focusing abilities

– Uses the same battery as the EOS M

– .87$ magnification in the viewfinder The new SL1 has a tiny body and is designed for people with tiny hands. For the target market that Canon is going for though, they probably could have simplified the new Rebel even more. With that said though, it is still very much a Rebel in ergonomics. To start, the front is nearly devoid of any buttons except for a lens release and the shutter release.

The interesting new addition is that the pop-up flash button is now electronic–so the camera needs to be on for the flash to pop. This camera has quite a few ports still in the form of HDMI, AV, shutter release and a microphone port. The flap covers it all up and is made of rubber. How Canon managed to squeeze this many ports into such an itty bitty cam is honestly really quite cool. The back of the camera is one of the most plain and simplistic that I’ve seen in the Canon DSLR lineup. In fact, I was very vocally surprised when I saw and held it. 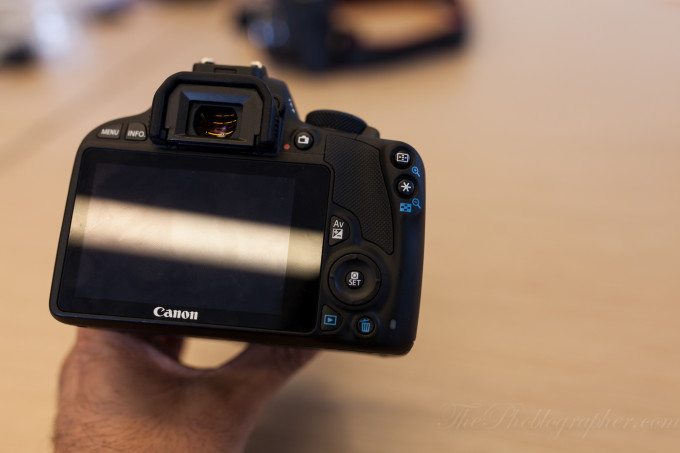 The back is characterized by a couple of buttons surrounding the screen. There is the menu/info button on the top left, the Live View and move record button to the right of the viewfinder, focus point selection on the top right with AF/AE lock right under that, the aperture/exposure compensation button below that by the screen, and a new directional button around the set button.

Then there are the playback and trash buttons all the way at the bottom. When you come to the top of the camera, you’ll see Canon’s hot shoe, the ISO button, shutter release, exposure dial, mode dial, and around that is the on/off switch with the movie mode also incorporated. Let’s make no mistake, this is a Rebel. Canon’s Rebel line is the entry level series and also their best sellers in the DSLR market. The original Digital Rebel sold like hot cakes covered in bacon–and later on Canon decided to split their Rebel series into a higher end and lower end segment.

The new SL1 was named as such because SL is supposed to stand for, “Super Light.” And with that, I was surprised to the point of not watching my language with a small outburst when I first held the camera. In all honesty, it feels as small as the Panasonic GH3. What that means is that Canon was able to take a DSLR (with a mirror and pentaprism built in) and make it as minuscule as a mirrorless camera. Granted, the GH3 is the size it is for ergonomic reasons partially, but it is still an interesting comparison point.

With all of this said though, the Canon Rebel series of cameras have always felt plasticky without somehow or another feeling cheap. This new Rebel camera is also held to this standard. It doesn’t feel as solid as a 60D or anything higher than that–so people purchasing this camera should keep that in mind.

If you’re a parent thinking about purchasing a DSLR for your kid before they go off to college, consider some of the absolutely idiotic things that college kids do. We’ve all been there–I was there only a couple of years ago. I’ve seen my ex-girlfriend drop her camera in a beer cup after being a tad bit over the line of tipsy. And no, this camera will not survive something like that. The key is to exercise responsibility–and to not drop the damned thing.

The worst was during CES when I saw another journalist detach the lens from their camera and then just put the camera in their pocket–with the sensor uncovered.

Once again though, this camera is targeted towards people that want something better than a point and shoot camera or their phone. And for the price point, this build quality overall is really quite good considering that the exterior is protecting a powerhouse of a camera. Just ensure that the buyer learns about the camera and reads the manual.

The autofocus from this camera was really very good. It blows my old Canon 5D MK II out of the water–but that is an antiquated system to begin with. The person buying this camera will get quite a bit of performance out of it. The SL1 has a touchscreen operation, and it is really simple to work with. To be fair though, Canon’s menu system may be a bit more complex than most users might like. This is all very simple to me–but I’m very experienced with the company’s cameras. Otherwise, I’d really recommend that someone buckle down with this camera for a weekend and learn everything they can about it in order to make the most of it. Oh, and just because I had to: there is also wireless flash control built in. 🙂

Because this was a pre-production unit, we couldn’t put an SD card in the camera to analyze the image quality.

Though I spent less than an hour with this camera, I was really quite impressed and I think that the SL1 might be the best Rebel to date. However, it also shows that Canon wants to eat into the mirrorless camera market by using their current strength–their DSLRs. The company has the EOS M, but it hasn’t been extremely well received by many and not much marketing has gone into it like they do with their DSLRs.

Once we get a working unit in our hands though, we will happily put this through its paces.