A profile view of the AlienBees 800 flash unit

So you’ve decided you want to take the next step and upgrade to some nice studio strobes to take your photography to the next level. There are some great options out there: Profoto, Broncolor, etc.

Enter Paul C. Buff’s line of Alien Bee flashes, which have long enjoyed cult status among enthusiasts and professionals alike for their insane price-to-performance ratio. Their mid-level offering is the B800 which at a price point of $279.95 delivers a max 320 watt/seconds of light. That is fully sufficient for most basic product shots or indoor portraits. Note: These can only be bought straight from the manufacturer.

The first thing you’ll noticed is that the typical up-and-down buttons for adjusting power output have been replaced by a very cool tactile slider. It may not be as exact as say an Elinchrom flash’s ability to adjust by 0.1/stop increments, but in reality it scales well and will only require a small amount of guesswork to get the right setting. A shot of the control panel of the Alien Bee 800 flash unit.

You have your usual buttons to enable or disable the optical slave and modeling lamp, as well as a test button. The “Dump” light will flash whenever you decrease power to remind you to reset the capacitors. This is a bare-bones flash that does not automatically dissipate its charge. Just like the good old days! One other thing of note: If you enable the “Track” button, the modeling lamp will increase and decrease in strength in sync with the power slider. This comes in handy if you ever want to use the AlienBee as a video light, and you don’t require the full power of the modeling lamp.

The AlienBee is pretty intuitive for anyone who has used a “big light” before, and shouldn’t take long to figure out for someone who hasn’t. This isn’t a complicated flash. My only issue is that the handle used to tighten the head on its swivel doesn’t rotate freely and will bash into the head itself if  you aren’t constantly readjusting it: You can fire the AlienBees with either the supplied sync cable or a radio trigger that is attached via the sync port. OR you can spend the extra money on the company’s Cybersync line of remotes. To create this product shot, I used my Canon 5D Mark II. Using the Alienbees unit and a grid (which can be bought for cheap from Paul C. Buff) that snapped right into the reflector, I raked a beam of light across the right side of the graphics card I was selling on Ebay. The light on the background is coming from a Canon 580 EXII pointed at it from below and is also incidentally triggering the AlienBees via its optical slave. The AlienBees will accept the Paul C. Buff line of light modifiers which include the usual softboxes, grids, umbrellas, etc. and through the use of an adapter ring pretty much anyone else’s as well. You won’t need to go off and buy new modifiers. Here’s an example using a simple 3×4 softbox to light a bridal party with one head: Who doesn’t like to take a picture of a pretty girl? Slap on an Octobox or Paul C. Buff’s own PLM system and you’ll have soft, flattering lighting with almost full-body coverage in no time. 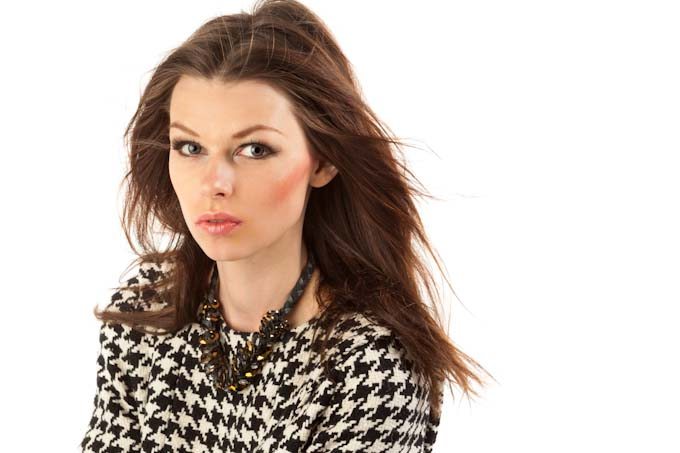 What I’ve also found is that the 150W modeling light that comes with the unit is often enough to light a scene for video. After getting tired of being confined to high ISOs and the resulting grainy video whenever I wanted to shoot bands, I tried taking the AlienBee along as a stage light. It works surprisingly well and with a grid and maybe some color gels can really jazz up a performance. The AlienBee 800 is a real bang-for-your-buck kind of deal. Don’t let the name and the cheesy graphics fool you: This is fully capable studio light at a price that is unheard of. A Profoto mono light will set you back a grand, and the Elinchrom DLite4 is the only other flash that comes close at around $329. The build quality is good, the light output adequate, though for outdoors I would suggest the B1600 which DOUBLES the output to 640 watt/seconds. The modifiers for this line of flashes are dirt cheap and you get a discount depending on how much you buy. I’d say these are excellent flashes to start with if you’d like to foray into big lights and should last you quite a while into the journey. As an added bonus, they are made in the USA!