The Phoblographer’s Guide to the Right Rokinon Lenses for You If you’re in the market for affordable, quality lenses, it’s hard to ignore the offerings from Rokinon and Samyang.

Over a very long period of time, staff members of The Phoblographer have reviewed countless lenses. Most notably though, we’ve reviewed a version of nearly all Rokinon lenses that have been produced to date. Because we’ve been generally pleased with the production quality, and overall image quality from Rokinon lenses, we’ve compiled a roundup of their lenses. Here you will find all of the Rokinon reviews we’ve done so far. If you’re looking for affordable prime lenses with some excellent image quality, this Rokinon and Samyang guide has you covered.

All of the Rokinon lenses we have ever tested and reviewed are listed below. You’ll find everything from ultra-wide angles to standard focal lengths and telephoto to super-telephoto lenses. When it comes to price to performance ratios, Rokinon lenses are seriously hard to beat. They feature stunning optics, great build qualities, and their newest lenses offer fast autofocusing motors which make them even more of a bargain. If you want to build up a robust kit of lenses and don’t want to set your wallet on fire, Rokinon lenses are the way to go. As we perform more tests and reviews, we will update this list. All pricing is correct at the time of writing. “This lens exhibits sharpness that is better than many of the native Micro Four Thirds lenses. In fact, I’m extremely impressed with how this lens performs wide open and stopped down. When you get to around f5.6, there really is no need to stop down anymore. Nearly everything will be in focus.” “The Rokinon 8mm f3.5’s image quality is exceptional when you nail it. To get the best results, I often needed to underexpose the images a bit and also therefore often shoot in manual mode.”

The Rokinon 8mm was one of the first products that we shot that made folks everywhere say, “It looks beautiful!”

“Though fisheye lenses are generally specialized lenses, this one was such a joy to use that I would keep it on all day and all night. It would inspire me to find skaters in NYC and get up close and personal. Plus, it often did inspire me to try new angles and get my timing better to capture those perfect moments. And overall, it’s just so much fun to use.” “I had a lot of fun with this lens. Though it took me just a little bit of time to get the focus I wanted, I felt that extra work got me some images that were worth the added effort.” “Rokinon’s lenses have always been very high quality when it comes to the optics. For a very affordable price, a user can get a super sharp lens that they’ll need to manually focus. This lens is no exception. But again, what you’ll get is some excellent image quality.” “The Rokinon 12mm f2 is a nice lens. It has good sharpness when stopped down and balances that with a characteristic film softness when shot wide open. Then there’s the small size, effective depth of field scale, and the overall nice feeling in the hand.” “For the price at around $400, you really can’t beat it. Canon and Zeiss’s options offer either autofocusing or assistance, but this lens offers essentially the same quality at a much more affordable price.” “It’s fast to focus, can deliver bokeh, has a fast aperture, has weather sealing, and is on par with Tamron’s pricing. How can you seriously go wrong?” “We REALLY, REALLY like the Rokinon 14mm f2.4 SP. It outputs great images on Canon sensors and I can imagine how fantastic it would be on Sony sensors. Rokinon has stepped their game up a whole lot in regards to build quality. The lens is sharp, has nice bokeh and delivers a very cinematic look to it” “We’re really not sure if there is anything for APS-C sensor DSLRs that can beat the sharpness of this lens. The detail that this lens is capable of resolving is astounding–but Rokinon and Samyang have special things about their elements that make the images look like they have film grain on them. However, you have to really look for it. Otherwise, the 16mm f2 gives quite a bit of pop to your images because of just how sharp it is.” “Lastly, what I’m absolutely floored by is how sharp this lens is even wide open. At f1.8 you’ll get plenty of sharpness but when you stop down to something like f5.6 you’ll be flabbergasted.” “The image quality of the lens is fantastic, though it could be better when shooting wide open. Color rendition depends on what color profile your camera is using.  The build quality is also fairly decent, and it’s what you could expect for a lens at this price.” “When you consider what Rokinon has accomplished with their lens and delivered it for under $1k, I find that to be pretty astonishing personally. Also, for the first time, Sony now have a tilt-shift option which should be cause for great rejoicing!” “In its time at my disposal, I had a lot of fun. It won me over and convinced me manual focus lenses are brilliant especially the Rokinons. After shooting with this lens I find myself using manual focus much more. This lens is well worth the price. The quality of this lens is absolutely ferocious.” 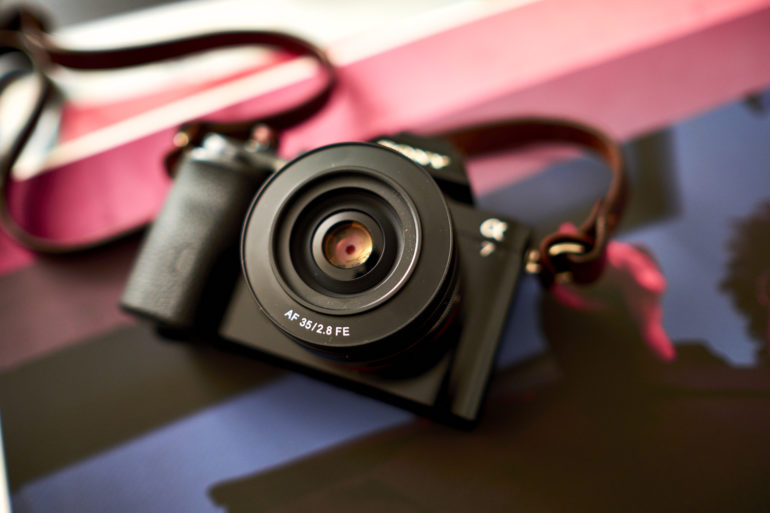 “The Rokinon 35mm f2.8 is a pretty awesome lens. You’re getting an arguably sharper lens than the Sony Zeiss version. But you’re not getting the faster autofocus or the weather sealing. Additionally, you may like the Sony Zeiss colors more. For that price point though, there isn’t a whole lot to complain about with the Rokinon offering.” “If you are looking for an affordable option for a cine-like lens, this is a one to consider. You have a sturdy build for the barrel, nice color, although in my use, this depends on what profile you use, and sharp images at f5.6 .Aesthetically this lens is handsome.” 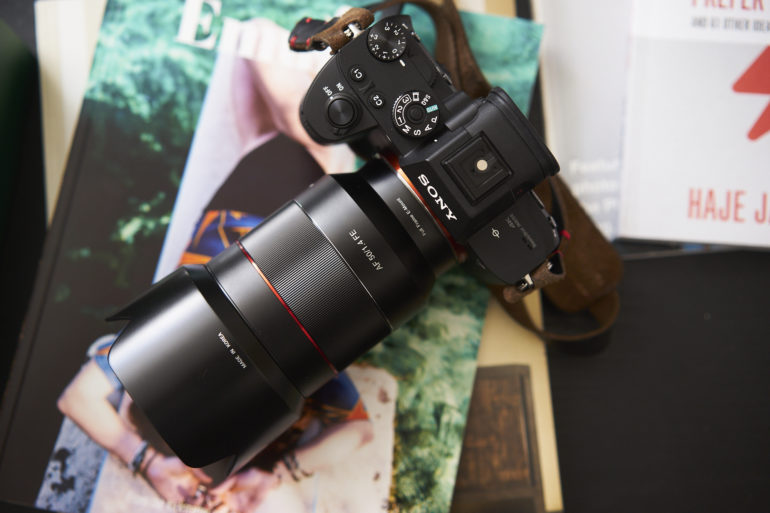 “I’m in love with the Rokinon 50mm f1.4 AF FE, and that’s hard to do because I have an ongoing hatred of the 50mm focal length. Rokinon truly nailed it here. Want better build quality? You’ve got it, this lens has a metal exterior. Not only that, but it feels uniquely like a Rokinon lens and not like a Sigma, Tamron, or Zeiss. There is no weather sealing, but I’ll excuse that. Rokinon’s optics have always been top-notch and this is no exception. The colors are bold, the contrast is there, the images are sharp, and the bokeh is gorgeous.” “Overall, the quality of the Rokinon 85mm is very, very good and I actually believe that wide open, it’s better than my Canon 85mm F/1.8. The lens has some of the best skin tone renderings I’ve seen to date and also renders other colors very well. In contrast to my Canon lenses, the colors are a bit more muted and less punchy but there is a bit more contrast to the images. Most users overall will be very pleased by what this lens can accomplish, but the ones that will most benefit are portrait photographers and videographers.”

“The Rokinon 85mm f1.2 SP lens is an almost perfect lens. For portrait photographers, it encourages us to sit there and create rather than capture and collaborate necessarily. If you’re a medium format film shooter, then you’ll get this perfectly. It’s a brand new lens in a digital world that abides by digital standards but that is designed to be used by a higher end shooter. And I genuinely appreciate that aesthetic.” “The Rokinon 85mm f1.4 AF FE is a very nice lens for what it is: a more affordable version of the Sony G Master with fewer features designed to be a mid-way point between Sony’s two options. The photographers who will go for it will arguably do so for the colors and because it means that they’ll need to do less post-work. If that sounds like you, then the Rokinon 85mm f1.4 AF FE lens is for you.” 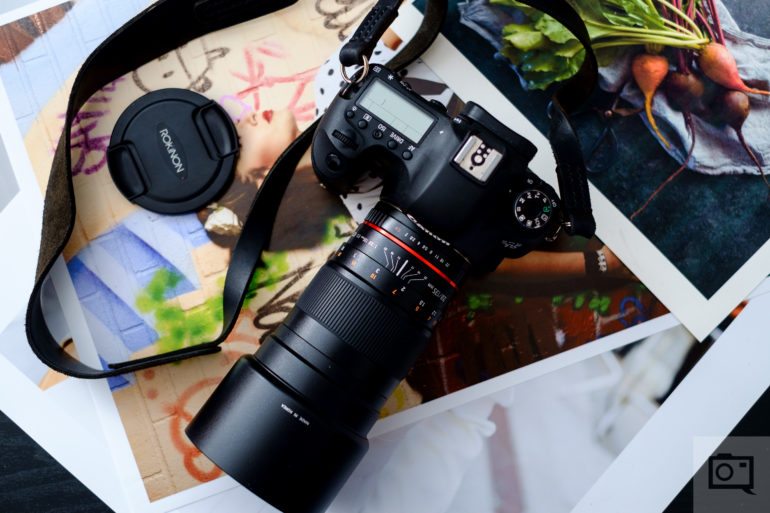 “The Rokinon 135mm f2 is a lens that belongs in the hands of every aspiring portrait photographer. It will teach you things about composition, focusing on details, being very careful with the elements of a scene, etc. Plus, it’s pretty affordable. It’s a beautiful lens and it’s highly capable of delivering beautiful images.” “This lens is unlike any I’ve used, primarily in the way it renders images. It’s a super-telephoto for a super-low price, and if you want a lens this long in a traditional construction, you’ll have to shell out a lot more. If you’re a paparazzo looking for something affordable, and replaceable in the event of a fisticuff, you’ve found your answer in this lens. This could even work for astrophotography if you’ve got the time and ideal location”