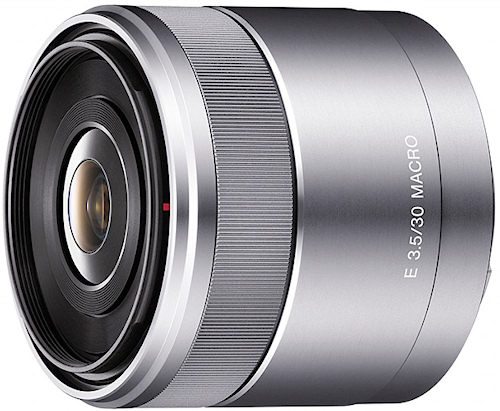 Sony’s 30mm f3.5 Macro lens for their NEX camera system is a bit of an odd man out. It isn’t the most popular lens or the one talked about the most vs their 24mm f1.8 and 50mm f1.8 (both very positively reviewed here on the Phoblographer.) But when the NEX 7 came in for review, I asked Sony to test it out.

Not only did I test it by itself, but I also used Kenko’s latest adapters with the lens. Rendering a near 50mm equivalent field of view, this is also the NEX system’s slowest prime lens with a weird lens hood.

But does it really deserve to be treated like an odd duckling?

There is not much to this lens at all: it is a simple solid piece of plastic on the outside characterized by a large manual focusing ring if you choose to manually focus the lens.

The interesting part though is the lens hood, which makes the lens look very alien-like. Autofocusing with this lens is extremely quick no matter what the subject matter may be, though I found the performance to be best with something more akin to street photography. When it came to macro shooting situations, it seemed that the best thing for me to do was actually switch the lens into manual focus mode. And due to that, it was also quite good using Sony’s NEX Peaking System that has been present in their video camcorders for years. The color rendition on the 30mm f3.5 macro is perhaps its strongest point. The colors out of the camera look like a well processed chrome film complete with all that was needed to get the image just the way that you want it in the camera. Because of its near 50mm field of view, it is also an excellent lens for street photography excursions in case you don’t want to shoot macro images with it. There is no color fringing to speak of and it is incredibly sharp wide open if not too shallow at the macro levels. To really make this lens rock, I recommend that Sony come out with an NEX ring flash system. With the Kenko Adapters

The Kenko adapters open a whole nother world of macro photography with this Macro lens. This lens is tied with the other primes in the NEX lineup for being amongst the sharpest lenses I’ve seen for Sony NEX. Sadly though, I feel that both of Sigma’s primes for the system can beat this little macro performer.

There are none of speak of except that I wish that the aperture were faster.

As a street photography lens, the 30mm f3.5 is fantastic. As a photojournalistic photographer, I rarely have a need for macro shooting. With that said, this would have been a much more killer lens if it had a faster aperture: and that is really the only thing holding this lens back from being even better. With that said, it is quite affordable at the time of writing this post and also renders an extremely natural field of view.

However, I just couldn’t fall in love with it in the end despite how excellent the color rendition was.

With that said though, this isn’t a bad lens at all: I just wish the aperture were faster and that Sony had a better system for Macro photography.