Keeping My Distance: Shooting Justin Long On a Movie Set 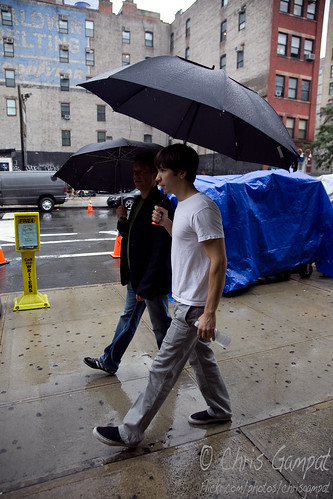 So I’ve blogged before about Julia Roberts, Sarah Jessica Parker, and even Gerard Butler. With Going The Distance coming into theaters later on this week, it is time that Justin Long and my encounter with him be shared. In general, my experience has been that male celebrities couldn’t care less about being photographed. As you’ll read, Justin doesn’t exactly like having a 5D Mk II

This day started like every other: wake up, get ready, go online, receive an email/assignment from the agency. Here’s the catch. It was raining cats and dogs. No photographer ever wants to go shooting in the rain. It’s usually too risky for the equipment and the investment, and it’s generally much harder to shoot in the rain.

So they gave me one big assignment: go photograph Justin Long and Drew Barrymore on the set of Going the Distance in downtown Manhattan.

Like any other 20-something that saw Charlie’s Angels, I loved Drew Barrymore. And from the way he carried himself in movies, Justin Long seemed like a really nice guy. Ecstatic adrenaline ran through these veins. And so, the gear went into the messenger bag, hoodie over the torso, feet into the shoes and Metrocard through the turnstile.

At this point in the game, I was still cutting my teeth but previous mistakes had knocked some sense into me. Every movie set has a couple of very critical and important locations:

If the celebrity’s agent really leaked a lot of info, then you’ll get a total logistical plan of the area. Luckily, I did. And so through a pint-sized version of Hurricane Katrina, I found the trailers. Walking around cautiously, I greeted the guards and acted stupid.

“Excuse me sir, where can I find the Classic Car Club?”

“The Classic Car Club, it’s supposed to be somewhere around here off Canal Street but I can’t really find it.”

At this point, the guard is totally confused but is being a nice guy and is looking for it on his iPhone. This is where I looked around the area and took careful note of the trailers.

“What’s with the trailers?”

“A movie? Dude, that’s awesome, I was a film major in college! Think they’re hiring interns?”

“Probably, you can probably ask around if you see anyone on set. The Classic Car Club is at 250 Hudson St.”

“You go up this street, then turn right then left and keep going up. If you hit Spring Street, you’re too far up. But be careful around here because they’re probably going to tell you to go around since they’re filming in that area.”

“Do you know who is in the movie?”

“Drew Barrymore and some skinny kid with acne.”

The guard unknowingly provided a hell of a lot of information for me. How did I know to ask about the Classic Car Club? I had been in the area before covering an event for PCMag.com. In reality, I actually had a very decent knowledge of the place.

Right at Hudson St was where the caterers were located. Right around that area was Justin Long, just hanging out, talking with people and going into the NYC Fire Museum. Taking the camera out right there and then was way too risky as it would immediately alert the cast and crew.

And the shutter finger was still, but the clouds weren’t. The rain began to kick in tenfold.

Refuge in a Deli

When it rains on a movie set, hell essentially breaks loose. Everyone rushes indoors and the crew tries to protect all the equipment as best as they can. All talent and higher level crew members are escorted around by guards with umbrellas. I was able to spot exactly where Justin went into, and so I waited.

The weatherman said that the rain was going to last a while. Because of this, the nearest deli became a refuge spot for a while. It was perfect. Stools were lined up against the window facing the filming set and where Justin just went into. Consumption of a turkey hero commenced as I waited for “the target” to come back out. Sitting to the right of me was a team of regular Joes that wanted to take photos and sell them, just for the heck of it. But they had no idea how to. It was at this moment where I really realized just how much this market was oversaturated. For photographers to be competing with regular folk was just insane. One side of the fence did it to put food on the table, the others did it just because they could.

After eavesdropping on their conversation for a little while, I found out that Drew Barrymore was in the same spot as Justin.

Cool, I thought. I’ll be able to kill two birds with one stone. At this point, the rain was dying down a bit and I stood in front of the deli, under the awning waiting for either Justin or Drew. My hand went into my messenger bag and felt around for the 5D Mk II

with lens attached. Because I had spent so much time with it by now, I was able to unscrew the filter, turn the camera on and set it in AI Servo mode without even looking as the camera stayed in the bag.

So this was the waiting game. Justin and a producer came out. You can see them in the picture above. They were strolling; walking the equivalent speed of what pisses off most New Yorkers when tourists flood midtown.

When Justin was close enough, the camera came out and I fired a couple of shots. Justin didn’t like this. In fact, it was the first time that I had ever gotten a look of disapproval from a male actor. The camera went back into the bag and shortly after, a couple of guards told me to leave.

I went across the street.

After waiting a while longer, Drew came out—with five guards who all blocked my shots. Bastards. To date, the couple of seconds that this all happened in still haunts me as my worst experience ever photographing celebrities. I simply just don’t get it. Lindsey Lohan is so nice and such a sweetheart. Why the hell can’t Drew be? Even more so, why can’t Justin? You know who were really nice? The cast of Law and Order SVU!

I went home, sent my agency the photos and told them what happened. They thought it was awful and were actually sympathetic to the fact that I was just starting in the industry still and encountered this problem. I had experience as a photojournalist but photojournalists go up to people and ask their permission to take photos. Celebrity street photographers don’t. It was a different world.

After some emails back and forth, they stated that the agency would not invest in purchasing a 70-200mm F2.8 L lens for me. In fact, they told me to go buy my own or alternatively to rent it. My contact actually recommended that I get the Sigma or Tamron version to save money.

Once again, this is why I had wished that the 7D

was out around this time. To be fair, there are many photographers able to do wonderful things with the 5D Mk II. I had recently upgraded/switched from Olympus.

This day again was only another reason why I left celebrity photography behind. As stated before in previous pieces, there are some very good photographers out there and some wonderful celebs, but being sent into an area with so many unknown variables was just insane. Part of this is why I admire war photographers so much, though what I did is nothing compared to what they do.