It was only a matter of time until Zeiss added a new lens to the Otus family: and today the company is announcing their 85mm f1.4 Otus lens. The company said on Facebook last year that they’d be releasing a new lens and indeed it’s on its way for Photokina 2014. Before we even get into it, the price is $4,490–way too much for many of us mere mortals. But the company has surely done a lot of work to make sure that the performance is the utmost top of the line. Indeed, we’ve been testing the lens for a couple of weeks now and it has been blowing our minds.

As for the features of the lens, it sports an all metal exterior with the exception of the focusing ring–which is made of rubber just like the company’s Touit lenses. The reason for this is due to working in the cold weather with the lenses. It has 11 elements in 9 groups, a minimum aperture of f16, has an 86mm filter thread, comes in Canon EF and Nikon F mounts, and weights 1140g for the Nikon version with the Canon version coming in at 1200g.

The lens is obviously targeted at portrait photographers along with fashion photographers–but given our user experience with the 55mm f1.4 Otus lens we will probably think that manually focusing the optic without a tripod may tend to shake the camera up a bit to get accurate focusing consistently.

At this point though, the photo world is most likely drooling over this lens but looking at Sigma for an autofocus response.

More tech specs and images are after the jump.

END_OF_DOCUMENT_TOKEN_TO_BE_REPLACED DxOMark is announcing their Sigma 50mm f1.4 Art lens findings today. According to what they did in the lab, the company concludes that the lens is outperformed by the 55mm f1.4 Zeiss Otus lens only in terms of light transmission, distortion control, and vignetting control. Otherwise, they’re basically exactly spot on when it comes to sharpness numbers. The even more fascinating news is that they both wipe the floor with Canon’s f1.2 L offering–and hopefully will dispel the myth that someone should only go for all L glass when building their Canon kit.

The company didn’t test the lens on the Nikon D800E and we figure that this is mostly because the units going around right now are Canon mount.

More findings are after the jump.

END_OF_DOCUMENT_TOKEN_TO_BE_REPLACED 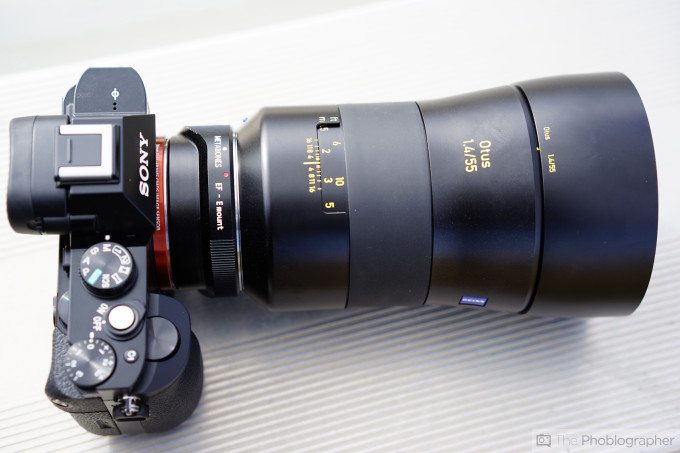 As we continue our misadventures on the Sony press trip, we were able to test out the new Zeiss 55mm f1.4 Otus lens a bit on the Sony A7r. Even with Sony’s focus peaking, we found this lens to be incredibly tough to focus when shooting with it wide open. The version that we’re using has an EF to E mount Metabones adapter, and so focus confirmation doesn’t exactly work in the same way that it can with a DSLR. However, we believe that Zeiss should make the lens in an E Mount or A Mount version for sure for better focusing performance.

Here are a couple of quick sample images. We’re going to be working on more later on today hopefully with studio lighting and all. Stay tuned.

AS ALWAYS: the EXIF data is in the file name of the image