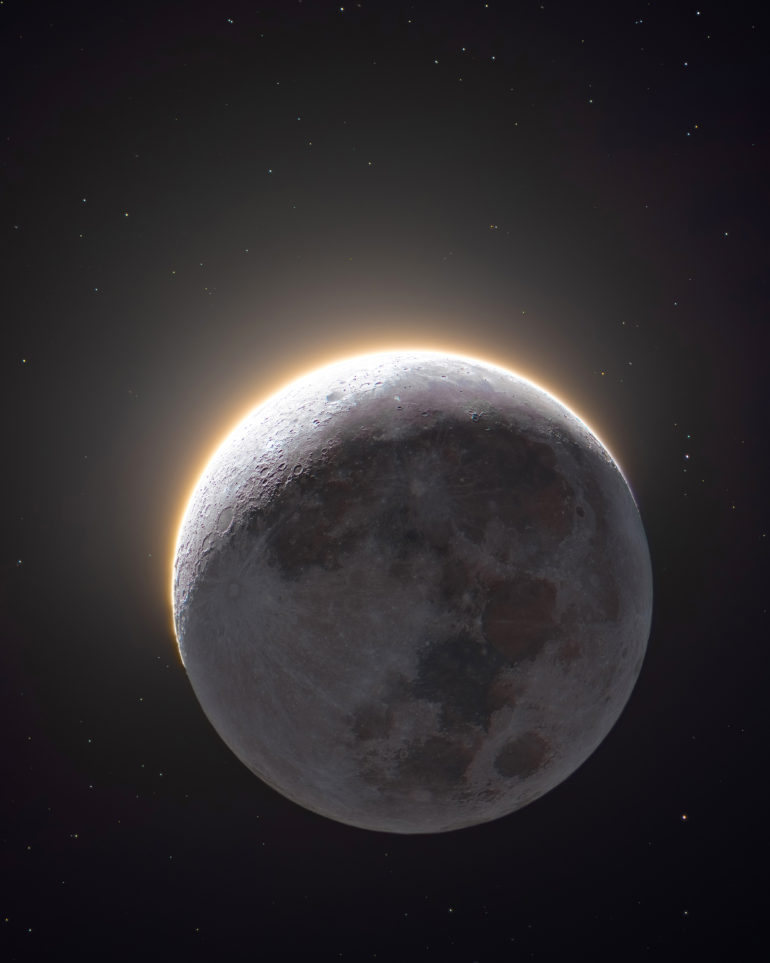 “A common misconception is that light pollution can hinder seeing anything in space,” clarifies prosthodontist and astrophotographer Rami Ammoun. This was an eye-opener for someone like me, who grew up in a city and barely saw stars and constellations in my childhood. Capturing images like this is hard work; Rami breaks down some of his techniques in a quick chat with us.

The feeling of seeing so many stars; constellations that I’d never seen before; I don’t think I’ll ever forget that night. Dubai was quite a bustling city when I grew up in the 80s and 90s, and constellations in the sky were rare because of light pollution. Astrophotography was something that only NASA probably did back then, and household telescopes weren’t commonplace. In my late 20s, I first ventured out to one of the few dark sky areas in the country. After about 10 minutes of my eyes adjusting to the drive in the dark mountains, we stepped out and looked up. To say it was breathtaking would be an understatement. It’s not like that evening converted me into an astrophotography enthusiast. Still, it gave me a deep appreciation for those who point their lenses into the sky, night after night, to capture the galaxies.

The reason I have a variety of lenses and cameras is because I use the high power instruments to get images of far objects like planets and galaxies, while low power instruments get me a wide angle view of the field of the images. I then use the images I get to blend them into composite images and put things together

The Phoblographer: Hi Rami. Please tell us about yourself and how you got into photography.

Rami Ammoun: I’m originally from Lebanon. My original profession is dentistry. I moved to the USA in 2013 to continue my dental education, where I got my US dental degree in 2015. I then did 3 years of advanced dental education in Prosthodontics. I got my masters degree and found a job in Richmond, Virginia, where I moved in September 2018. My photography journey started in 2015 while I was still in dental school, and it kept growing with me until it became my main hobby

The Phoblographer: Where did the fascination for astrophotography start from? What was that moment when you realized you wanted to spend a lot of time with your camera pointed to the skies?

Rami Ammoun: I got introduced to Astrophotography in April of 2015. At that time, I had just finished my first dental degree in the USA. During the graduation dinner, I got a $1500 award, and I used that to buy my first professional camera. I wanted to learn photography in general however, I didn’t know which type of photography would be my favorite, so I grabbed my camera and started shooting at various times of the day. I later bought a tripod and started trying long exposures at night, and it blew my mind. Mostly, anything looks more spectacular to the camera at night with a long exposure. I took a photo of my neighbor’s house at night, and it looked amazing, totally different from what you see during the day. At a later time, I was shooting right after the sunset.

The moon was just rising at that time, so I placed my camera behind two trees and took a picture of the moon framed under these two trees (Image 03). When I saw that image, I felt a blissful joy in my heart. I zoomed in more with my lens and took another shot, and it showed some craters on the moon’s surface. I got more curious to see more details, so I started getting bigger lenses until I got a telescope. And since then, most of my photography has been about the moon and the night sky.

Shooting the moon is never boring to me. It’s like shooting a very pretty model.

The Phoblographer: You’re well known for your images of the moon, which stand out from those shot by other astrophotographers. How do you get that glow?

Rami Ammoun: Thank you! A camera has a narrow dynamic range of light, thus a single image cannot capture the bright moon with the glow without over-exposing it. I add the glow by blending a long exposure of the Moon behind the actual moon disc. I also add a layer of the stars between the Moon’s disc and the overexposed background. I then decrease the transparency of the Moon’s disc so it looks natural and glowy at the same time.

The Phoblographer: Chasing the ISS in front of the moon is something I’ve never attempted. But planning aside, that split-second window you get to photograph it – what’s the best way to maximize your chances of getting that shot?

Rami Ammoun: The ISS will not stay in orbit 250 miles above us forever. It is planned to be retired in January 2031 after 31 years of service, and it will plunge in the waters of the southern pacific ocean. I thus try to capture whatever I can from this masterpiece before it’s gone. One thing I love capturing is the ISS lunar transit. It’s relatively easy since you don’t need to chase the glowing station by hand on a telescope, you just point the telescope at the Moon and wait for the transit.

The Phoblographer: Your Instagram feed has several photos of the moon. Does it ever feel repetitive and boring, shooting it again and again? How do you keep things interesting for viewers and yourself?

Rami Ammoun: Shooting the moon is never boring to me. It’s like shooting a very pretty model. Yes, you shoot the same model but in a different way every time. The moon is no different, where you have 4 different lunar phases in a month. Lunar photography can also sub split into a wide-angle and close angle, and every month has a different naming for the full moon, which helps me add a style to the monthly full moon photos. And we should never forget the lunar eclipses, which are events where I usually have growth boosts if I document them

The Phoblographer: Have you received requests from your followers to photograph different objects in the sky? How do you handle such queries?

Rami Ammoun: Regardless of how much I love Moon shooting, I love other types of astrophotography. I deliver to my audience who request me to shoot other space objects, and I include planetary imaging, deep sky imaging, and wide-angle night sky images like star trails or Milky Way images.

Astrophotography is an extreme and difficult hobby in general, however all aspects of it are enjoyable to me and the results are always rewarding. I think about it this way, the night sky are full of jewels waiting for you to capture them, so capture them while you can, and when you can

The Phoblographer: What’s the furthest celestial object that you’ve photographed? Which is the one you’re really looking forward to photographing?

Rami Ammoun: The farthest object I captured is the M65 galaxy, which is one of the Leo triplet galaxies. This galaxy is 34 light-years away.

Rami Ammoun: My favorite farthest object is the Sombrero galaxy; I would really love to take a very large image of it using a specialized monochrome astronomical camera, which is something I still don’t have yet due to its high price. As far as planets, the farthest planet I captured is Neptune.

The Phoblographer: Light pollution is becoming a factor that is increasingly difficult to contend with these days. Apart from accessories like night pollution filters, what other suggestions could you provide our readers to counter this?

The Phoblographer: Are we really alone in the universe? Do you ever hope you’ll spot something in your images to counter this?

Rami Ammoun: Think about it; there are trillions of stars in the universe. Each star is actually a sun that makes its own solar system. The odds that one of these solar systems has a habitable planet is pretty high to me. However, because it’s so far, it is currently impossible to capture that from any telescope man ever made. If we see another form of life coming close to Earth, it is very likely an extremely advanced civilization that discovered a means of transportation faster than light itself.