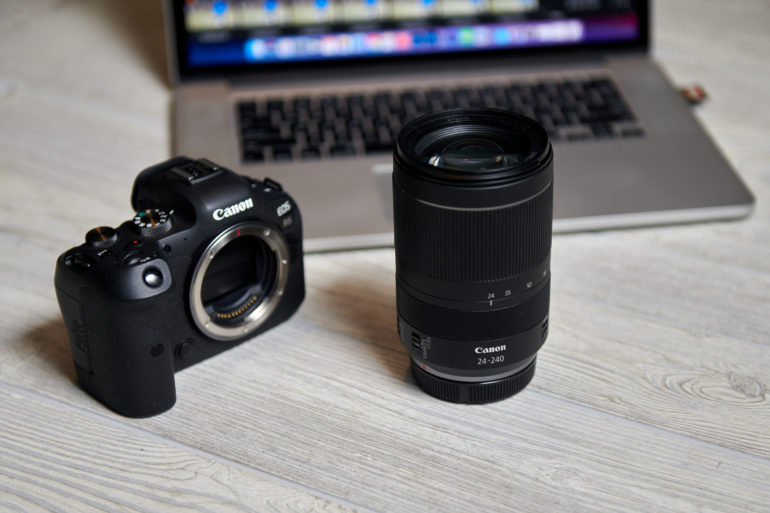 Full frame cameras require a lot of glass, even just to zoom three or four times. However, the Canon RF 24-240mm f4-6.3 IS USM manages to pack a 10x zoom into a lens that’s less than five inches long. Canon even managed to build in stabilization, and it’s under two pounds and under $900.

But, zoom lenses seldom rival the quality of a prime, and image quality tends to degrade when more focal lengths are crammed into a single lens. Is the ability to go from ultra-wide to telephoto worth sacrificing a bit of image quality? I tried the Canon RF 24-240mm f4-6.3 IS USM to see what Canon left out in order to fit wide and telephoto into the same lens. Here’s what I found.

The Canon RF 24-240mm f4-6.3 IS USM is rather compact, considering all the focal lengths inside the lens. But, it’s a jack-of-all-trades-master-of-none sort of lens that delivers just okay images. It’s an okay lens if you can only pack one lens when traveling, but it doesn’t wow.

These technical specifications were copied directly from the Canon USA website:

For a 10x zoom lens covering both wide-angle and telephoto, the RF 24-240mm f4-6.3 IS USM is surprisingly small. The lens barrel is less than five inches long, and the lens only weighs 1.65 pounds. I slung this over one shoulder with a sling strap, and I was still able to comfortably bring this lens along on a five-mile bike ride.

Close to the lens mount, the lens houses three switches. On the right is a lock to keep the lens from extending in the bag. Sitting near the left hand is a focus switch and a stabilizer on-off switch.

That focus ring is the first one out from the lens mount; the zoom is the second. The focus ring is narrower and has a diamond texture. The zoom ring is wider and has a striped, grippy surface. The design means you can reach for the rings and know if you grabbed the wrong one just by how they feel.

The front of the lens supports a 72mm filter. Canon doesn’t include a hood in the box. It can accommodate the EW-78F, which sells for about $40.

As a $900 lens with enough focal lengths to replace a slew of lenses, the lens doesn’t have a high-end build. There’s no weather-sealing (I can already hear that a bit of dust is grinding underneath the focus ring.) The barrel is plastic.

The upside of that? The lens isn’t super heavy for all those focal lengths. And while the construction is less robust than others, it didn’t feel too fragile.

The Canon RF 24-240mm uses a USM autofocus motor. It’s a near-silent motor that you could even use in a library.

The autofocus on the Canon RF 24-240mm largely kept up with bird photography, with only a few misses. While the lens occasionally focused on the wrong branch, it did pretty good focusing on small, moving subjects. I was impressed that I could point to birds flying across the sky above and lock on before the moment was completely over.

But, a 24-240mm lens requires a lot of optics to move, and while the lens locked on quickly, keeping up for subsequent shots was a challenge. Photographing a quickly moving subject, like my 8-year-old dribbling a soccer ball, I had two to three times as many soft shots as I did with the same camera body and settings, but the RF 70-200mm f4 IS USM L mounted instead. Nearly a third of the continuous autofocus shots with the subject heading towards me were soft. Those photos were just a little soft, focusing on ears or shoulders instead of the face. That’s not terribly surprising considering how far the optics have to move. And, it’s worth noting that the R6’s fast burst meant I still had some sharp shots to choose from.

This lens strikes a good balance between lacking helpful controls and having so many controls that it’s daunting for new users. The 24-240mm is easy to get started with right out of the box. If you haven’t used RF lenses before, you’ll just want to familiarize yourself with the focus to control switch that changes the focus ring’s function.

Cramming such a wide range of focal lengths into a compact lens is bound to create a few issues. And indeed, there are some. The lens has significant barrel distortion and vignetting, some aberration, and you don’t get peak sharpness until f6.3. But, the JPEGs do a good job of correcting most of those issues.

An f4-6.3 lens isn’t made for bokeh. But, the longer focal length and full-frame sensor do allow for some blurred backgrounds. Points of light are rendered to round bokeh balls. I didn’t spot onion ringing or a soap bubble effect.

At the widest angle, the center of this lens is nice and sharp. But, that sharpness quickly falls off. Once you get to the first Rule of Thirds line, I could already see some softness at f4. Nearly half the frame is quite a bit softer than the center point. At about f6.3, the corners are nice and sharp.

Zooming in to about 70mm, the sharpness improves quite a bit with a wide-open aperture. The softness here is more relegated to the corners, rather than starting at the Rule of Thirds line. Of course, shooting wide open at 70mm is at f5.6, not f4.

Sharpness at full zoom is similarly good, with just some softness at the corners. Again, “wide open” here is at f6.3, so that helps. If this was a 24-240mm f6.3 lens, the lens would have great sharpness. But, with f4 at the widest angle, the fall-off on the corners is drastic.

Canon also built-in stabilization: a pretty necessary feature for such a long lens. I was able to get shots at 65mm still sharp at 1/8 of a second.

Because this lens covers such a wide range of focal lengths, the 24-240mm suffers from some extreme barrel distortion and vignetting. The JPEG automatically corrects that distortion. (As of this writing, Capture One did not yet have a profile for this lens to adjust the RAW.) But, you lose quite a bit of the edge making that correction, enough to crop out entire trees.

Take a look at the unedited RAW and the JPEG, paying close attention to those edges:

The distortion was most obvious at the widest angle, but the telephoto-end has some vignetting. You’ll want to leave a little extra room around the edges and shoot in RAW + JPEG until your favorite photo editor has a profile to easily correct the distortion.

I could spot some chromatic aberration, largely towards the edges, in the RAW files. Much of this was corrected in-camera when shooting JPEG. Again, this is another reason photographers may want to wait until their favorite photo editor supports this lens profile.

Color with this lens is similar to what I’ve seen with other lenses mounted on the R6. Colors felt true to life, though true to life is a bit drab and brown in early spring. Still, even shooting a colorful lens test chart, the camera-lens combo could differentiate between hues and didn’t feel overly saturated.

From day one, The Phoblographer has been huge on transparency. Nothing from this review is sponsored. Further, lots of folks will post reviews and show lots of editing in the photos. The problem then becomes that anyone and everyone can do the same thing. They’re not showing what the lens can do. So we have a section in our Extra Image Samples area to show edited and unedited photos. From this, you can make a decision for yourself.

The Canon RF 24-240mm f4-6.3 IS USM covers a majority of the most popular focal lengths in a single, compact lens. But, the 24-240mm is trying to do too much. Cramming so much into one lens creates image quality sacrifices with corner sharpness, barrel distortion, aberration, and vignetting. It’s a jack-of-all-trades-master-of-none lens.

While the lens doesn’t deliver near the impressive image quality of Canon’s lenses without quite so much zoom, the ability to go from wide-angle to telephoto is tempting. And if you can only pack one lens, the 24-240 will serve you for many different types of shots. At $900, it’s relatively affordable considering the sheer amount of focal lengths covered. I can see novice photographers using Canon’s cheaper RF bodies really liking this lens’s simplicity and versatility. That will be especially true for photographers shooting in JPEG and spending more time at the 240mm end than the 24mm end of this lens. But, if image quality is paramount and you are working with a pro-level RF body, save some more cash and opt for something like the Canon RF 70-200mm f4 IS USM L instead.