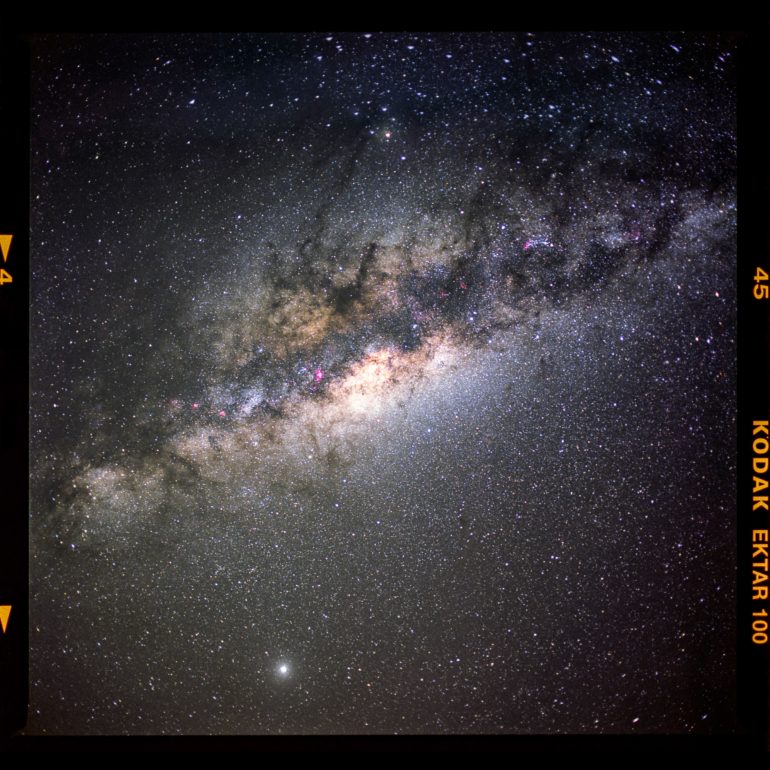 “Initially astrophotography interested me more than photography in general – the fact that such stunning images of space could be taken by amateurs from home surprised me,” says film photographer Jason De Freitas. “As an engineer the technical aspects of astrophotography attracted me towards it.” He’s an engineer during the day, but when night comes he adores the process involving film. For him, he found that shooting with film really did not only slow him down, but made him a better photographer.

Editor’s Note: If you’re looking to decorate the walls of your home, buy a print from Jason.

Jason: I’ve always been drawn to cameras from a young age but I never took the plunge to learn photography in depth. About 5 years ago I moved to a new town for a job opportunity – I had moved from a big city to a small coastal town so I thought it would be a great hobby to explore the area. It unlocked a new creative side in myself and quickly turned into a strong passion.

Phoblographer: What made you want to get into Astrophotography?

Phoblographer: Here’s the bigger question, what made you want to do astrophotography on film? I’d think that that’s the kind of thing you want to take less risks on, right?

Jason: This is one of the questions I’m asked a lot and the simplest answer is because I love using film. I think you can simplify the question down to why anyone chooses to use film in 2020. Some people might argue they prefer the look of film but for me I just enjoy the process. It really did change my approach to photography – the cliche of film really slowing you down and making you think about what’s worth photographing really did help me evolve as a photographer.

Initially my astrophotography on film started from a more logical foundation with star trails. I do believe film is a great medium for star trails as you can create true continuous trails as opposed to stacking methods with digital cameras. I would set up a film camera and let it expose for a couple of hours while taking Milky Way photos and timelapses with my dslr. As I started shooting more and more film in my general photography my DSLR was only really being used for Milky Way photos. The idea of trying to capture the Milky Way on film was something that was always in my head, maybe simply to see if I could. The challenge of it was more motivation than anything else – it definitely isn’t superior, more reliable or easier than digital but the results have been way more satisfying. I’m always self-conscious about sounding pretentious or sappy when talking about film, but there is something that feels special to me about the photons from the stars and nebula I’m photographing have a direct reaction with the film that I’m holding at the end of the process. Especially when I use slide film.

Phoblographer: So when you’re doing something like a 90 minute exposure, what do you usually do to pass the time? How do you take every precaution to make sure that everything gets done correctly?

Jason: My longest exposure so far has been 3 hours (for a large format Milky Way shot) – often I have multiple cameras with me so while one is exposing I might be setting up another for a star trail shot, or setting up my DSLR to make a timelapse. Once everything is running on it’s own I can usually wait it out in my car – I can set an alarm and try to get an hour or two of sleep or watch a movie.

There’s no secret to getting everything setup correctly besides taking your time. With film you don’t get any feedback until after the session so you just have to set everything up as accurately as you can and then go for it. I’ve had plenty of failures but every time I get a little better at it and have more confidence at trying more difficult shots and longer exposures. That’s really my journey here, every time I succeeded in one shot I would try something a little harder – that was initially by starting out with 35mm Milky Way shots and transitioning to medium format and finally large format (exposure times of 15 minutes to 3 hours respectively.)

Phoblographer: How many times have you had failures that you did like on your film rolls?

Failures – plenty! Failures that I did like – none that come to mind. I haven’t been fortunate with an accidental double exposure or a pleasing light leak, my failures have usually been complete failures where I end up with a blank roll at the end of developing!

Phoblographer: You do both slide film and negative film. But what do you tend to like more?

Jason: For astrophotography – the choice of film stock is very important (mainly you want film with low reciprocity failure.) Usually I’m shooting on slide film because of this but I absolutely love being able to hold a slide up a light and viewing it. I recently bought a slide projector and seeing my photos projected has been one of the most satisfying and enjoyable moments.

That being said, the colours that Kodak Ektar 100 (a negative film) captures for astro really impressed me and I can’t wait to print some of my negatives in my darkroom.

Phoblographer: Have you ever tried doing this digitally? What are some of the biggest differences to you besides the post-production process?

Jason: I’ve taken these shots digitally but usually as a way to help me frame my film cameras. You can’t really see through a viewfinder at night whereas with a digital camera you can take a quick exposure and then adjust your composition.

Obviously the main difference is the exposure times. You can take Milky Way shots with just a tripod and a DSLR but with a film camera you have to use a star tracker. I’ve never used my DSLR on my tracker to try stacking frames which can produce some amazing results, I’ve been too obsessed with the challenge of getting shots on film and there’s just too few nights that have good conditions for astro.

Phoblographer: What kind of pre-planning goes into taking each shot?

Jason: Usually the planning involves figuring out the window you have to take the shot and where it will be in the sky. For example, a shot of the Cancer constellation in the southern hemisphere is only visible above the horizon for a few hours during a few months of the year. I usually use a program like Stellarium to find where objects will be located in the sky as the night progresses. Most of the planning is more to do with waiting for the right conditions – a night close to a new moon without clouds is what I’m looking for (until I have the equipment to photograph the moon). For specific objects I’m also waiting for the right time of year when they’re visible in my location! No.