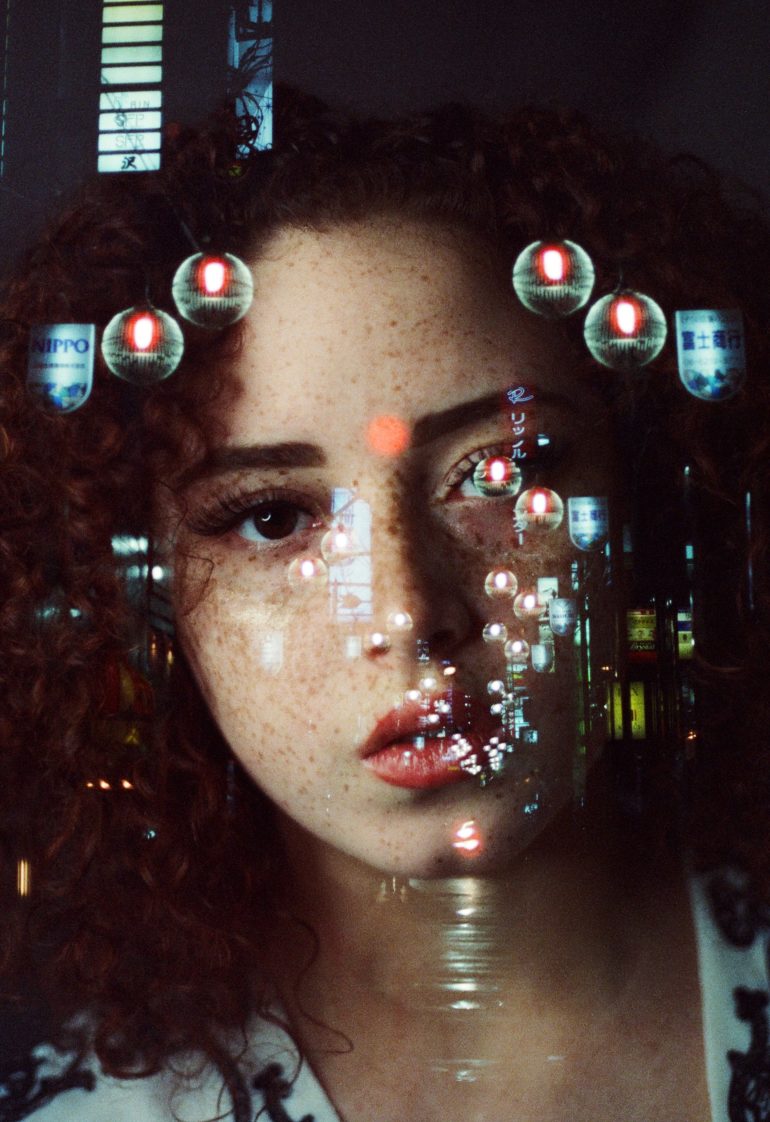 All images by Kate Hook. Used with permission.

“One big theme for me is ghosts because I have a lot of them, still living and not,” Photographer Kate Hooks explains. Kate is a name you have seen before on The Phoblographer. That’s with good reason as her film photography is some of the most creative and compelling we’ve had the pleasure of sharing with our readers. A lot has changed in Kate’s life since we last spoke to her in 2017, but one thing that has remained is the quality of her work. Back with a fresh batch of double exposures, Kate shares a series of work as eerie as it is pleasant. Intrigued by the theme, we dived deep into her creative world to see how life is going in 2019.

Phoblographer: Kate! It has been a couple of years since we last spoke. What’s new in your world? KH: A lot of change has occurred for me this year! The biggest one is I’ve recently moved away from my very landlocked city to live by the sea. I desperately needed a change of scenery and a fresh start.

Phoblographer: Your work continues to be dope! But tell us, what’s your biggest challenge creatively right now and how are you working to overcome it?

KH: Actually shooting, I’m currently going through what I describe as a “photo drought” due to a lot of things that have been going on for me- including this move being the biggest factor. But being in a new place means there are new faces and locations to capture, so I’ve been contacting and chatting to other creatives; photographers, models, artists, etc. So I’m making plans and pushing myself to create!

“For me traveling was amazing as I knew absolutely no one, but I met some incredible souls along the way…” Phoblographer: You’ve been doing some traveling. What role does travel play with regards to your mental health and productivity?

KH: My recent travels were probably the most self-indulgent thing I’ve ever done, and I’m so genuinely pleased that I got to escape my everyday chaos for a totally different kind of chaos- haha! My mental health prior to going was really bad, my physical health was being impacted, and I really disliked myself as I felt so insecure as well as paranoid about what people thought of me. For me traveling was amazing as I knew absolutely no one, but I met some incredible souls along the way, and really got to spend some real-time with just myself. I can deal with being alone and actively sought to experience things on my own. Also, I took a more laid back approach to booking shoots. I feel some of the shoots I did have really helped me mold my aesthetic as an artistic photographer. I think being in a completely new and different place will push you to be productive, to show what you can create in an unfamiliar environment with limited time and equipment. There are no creature comforts, nothing and no one to fall back on… it’s sort of liberating.

Phoblographer: Let’s talk about your double exposures. Where did the inspiration for this concept come from? KH: It’s an idea that lingered in my head for a long while, but something I couldn’t actually achieve due to being somewhere that isn’t flooded with interesting street lights. I have running themes in my work and I think about how I can present them differently instead of repetitively. I wanted to create a small series based around the idea of the faces of living ghosts in the cities, the ones you know but don’t know anymore… what you hope to see but never do, who still roam the streets you walk but never see…and if you do, they’re merely a ghost to you now, or you are to them.

“This was probably the most challenging double exposure series I’ve ever done as the portraits and scenery were taken almost four months apart!”

Phoblographer: It must be tricky making them on film? What’s your process for nailing it? KH: This was probably the most challenging double exposure series I’ve ever done as the portraits and scenery were taken almost four months apart! Normally with doubles of portraits, you can do them at the same time (depending on the functions available on the camera you’re using), but this time I had to rely on my foggy memory. I marked the film before shooting, so I knew where to reload it. This meant that when it came to the second round of exposures, I was able to line it up perfectly. I kept the ISO the same and slightly underexposed the second exposures. Other than that it was complete luck! Also the night I did the second exposures in Osaka it was raining like crazy! I had to balance the umbrella I had on my head or just close it, so I got pretty soaked by the end.

Phoblographer: Did you use a specific roll of film for this work? If so, why does this work with what you want to create?

KH: For this set, I used CineStill 800T 35mm film. It’s a lovely stock to use and I wanted a cinematic look to the photographs.

“…I want to create more for myself…”

Phoblographer: For each shoot, do you have a concept? Or do you shoot and randomly decide which scenes will expose well together?

KH: Before I use to wing it a little bit; now I’ll have a loose concept to work with. I never want to be very exact to whatever I’m thinking because then I feel some photographs can come across as quite forced or too gimmicky. When it comes to double exposures I always shoot the portrait first and then think what scenery would suit it afterward, but sometimes I’ll have a decent idea of what I do. Phoblographer: You seem to have taken a step back from your YouTube channel. Is there a reason for that? You had some cool content going on there.

KH: I know…I’m terrible. When I relaunched it earlier this year, I had it in my head that I’ll vlog my travels, but once I was actually traveling I didn’t want to spend a few days filming and editing when I had so much to see and do! Also, my confidence being in front of a camera soured when I came back. Along with that, I’ve had so much to deal with when I got home that I couldn’t even think about making videos- wooo adulting! It’s tough with YouTube as they are constantly moving the goalposts for small creators like me. It’s like they actually punish you for not frequently posting too. I have been thinking about making some new videos soon, so never say never.

Phoblographer: Are you still using your trusted Nikon FM2? Any plans to switch it up? KH: While I was in Shinjuku, I wandered into a basement camera store and bought a lovely Nikon F3, which I’ve been using a lot. I still love my FM2, and I find those kinds of models easier to work with as they’re more simplistic in their design. I’m saying that as since our last interview, I’ve been using a Nikon F100 a lot, and boy that multi-exposure switch can sometimes be the bane of my photographic process!

Phoblographer: Professional and personally, what do you hope the future will look like for you?

KH: Professionally? I hope I get hired for some work. I’m getting agencies saying they’ll let me know if anything suitable comes up, which I’m not holding my breath over. Not anything against them as I just know my work is really niche, a curse, and a blessing, I suppose. Until then, I want to create more for myself and get into a few exhibits as it’s been a while since I’ve displayed my work beyond the realm of social platforms. And personally? I just hope to find some peace in my life since my move, and not have my life fall to pieces instead.