All cosplay images by Georg Aamodt. Used with permission.

“When I’m photographing people, I tend to let them be aware of their own emotions,” says Georg Aamodt as he describes how he connects with his subjects. A versatile photographer, Georg regularly shoots fashion, editorial, and portraiture. But it was one of his personal projects we found ourselves drawn to. COSPLAY: Ideality of Reality experiments with the realms of fantasy and the everyday world. Suspending the otherwise mundane, he captures his larger than life subjects in a way that tells an intriguing story. From his own admission, the work wasn’t only a showcase of his creative capabilities, but also a journey of his own exploration.

“I had no clue what cosplay really was and I was curious to learn more.”

And so were we…

Phoblographer: Hey Georg, can you tell us how you first got into photography? GA: I first got into photography when I was around ten or eleven. I started out by photographing everyday narratives with every camera I could get my hands on, since I, at that time, didn’t have a proper camera myself. When I was twelve, I got my first “real” camera. It was a Canon AE-1 from ’76. It had three lenses, a 50mm, 85mm, and a 35mm; all the lenses I need to get started. From the moment I started photographing, I have always been fascinated by one photo series in particular. Actually, this series was the reason I started thinking about becoming a photographer in the first place. The series I am referring to is “Bored Couples” by Martin Parr. I remember seeing the photo series in a book called “Photographs from the Real World,” and I immediately was hooked on photography.

Phoblographer: You seem to have found your photographic voice. How long do you feel it took for you to really find your groove with that? GA: From when I started photographing, I found that I was most interested in how people act in front of the lens. I think I was drawn to “special” moments where people are in their own kind of world and blocks everything else out for a brief moment; fragments of everyday life. It took me a while to really focus on the direction I am working visually today when I am doing projects. I think it came gradually to me as I found new and inspiring photographers. In many of my personal projects, I shoot the portraits with my Hasselblad 500cm. The main reason for that is because of the waist level finder. There is something completely different shooting with a camera with a waist level finder, compared to, for example, an SLR camera – I feel like I don’t get that same feeling in my shots if the subject feels like I am staring at them with the camera up to my face.

Phoblographer: For your series, what motivated you to focus on cosplay? 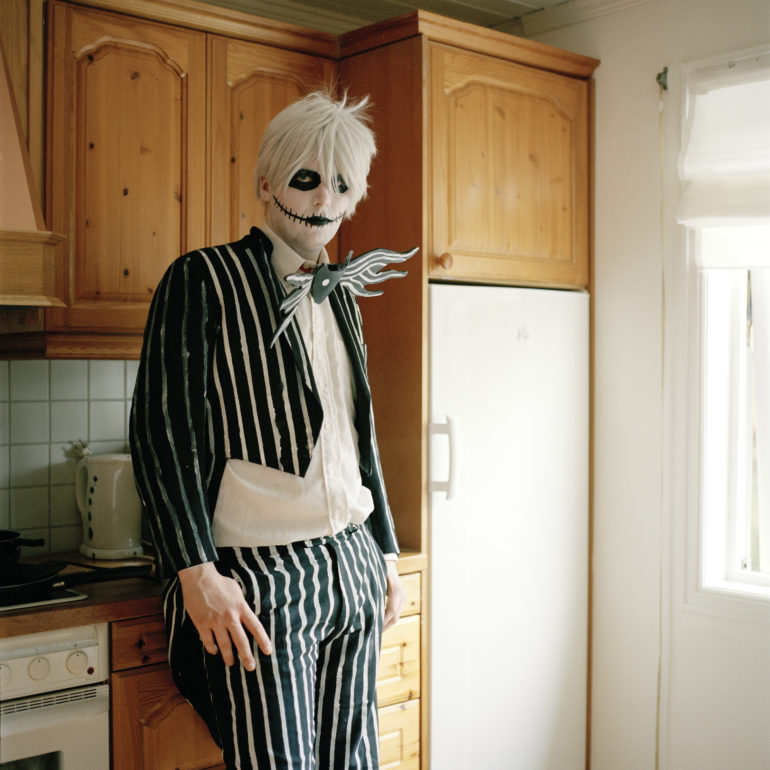 GA: What I thought was interesting and wanted to explore, was why cosplayer dresses up in costumes they have spent days, even months to make. It is almost like they escape their daily life when they are in character. There is something really interesting happening the brief moment when they go from being themselves and into the character, heroes, and heroines from Japanese pop-culture.

Phoblographer: Did you decide what your subjects would wear, or was it a collaboration between you and them? GA: I did not decide what the subjects would wear. I thought it was important that they picked the costumes they liked best for themselves.

“I wanted the environment to tell something about the person…”

Phoblographer: You seem to have put these larger than life characters in very mundane, everyday environments. What was your creative thought process behind that? GA: The series Cosplay: Ideality of Reality is an ongoing project where I make portraits of Norwegian cosplayers. I try to explore the balance between the make-believe world of cosplay and real life as I photograph these people as they escape their everyday reality and turn into another, slightly more colorful reality. I wanted the environment to tell something about the person and what the person might be like when not using the costume. I think it is important to say that I don’t stage the people I photograph, other than telling them to stand in front of the camera. I try to work as true to the documentary genre as possible. Phoblographer: What are the differences in your approach when comparing your professional portraiture and your personal projects? GA: When I am working with a client, I usually have more limitations to what I can do in terms of connotations and denotations; what I can show and how I show it. Whereas in my personal projects, I can be freer to express what I want to say, the way I want to say it.

Phoblographer: Can you tell us the set up for the Cosplay series; lighting and gear? GA: In the cosplay series, I have been using a Hasselblad 500cm loaded with Kodak Portra 400. I have used available light sources, both natural and mixed lighting.

Phoblographer: Is there going to be a follow-up series to this or something that follows a similar path of fantasy/reality?

GA: Yes. I will carry on with this project in the future. You can check out more of Georg’s work by visiting his website.