All images by Tatiana Ilina. Used with permission.

“Sometimes art can change how people see the world, but I want to change how the world sees people.” Those are the powerful words of Tatiana Ilina, a documentary photographer based in New York. Through her imagery, she is passionate about giving a voice to the voiceless – shining a light on those whom society has often placed in darkness. By connecting with fringe communities, she educates herself in the process. “I was always interested in creating the stories about incredible people who made me see many things in this world from another side.”

Tatiana’s Dance With Closed Eyes is a photo series that shows people who are blind but refuse to live up to the limitations our world has expected them to have. As a publication that empathizes with the blind community (our EIC is registered as legally blind), we were more than curious to learn about this moving project.

Phoblographer: Tell us about your back story. How did you first get involved in photography? TI: I was brought to photography by cinema when I was 20 years old, and I was fascinated by the new wave in French movie and in particular by films of Jean Luc Godard. His films immersed me in a special and unlikely reality, and while watching them I understood that I wanted to stop the moments to capture reality and tell the stories with my photographs.

Phoblographer: Dance With Closed Eyes is a very moving series. How did the project first come to life? TI: During my volunteering at the Research Center Theater Handicap (CRTH) in Paris, I did many projects in support of people with special needs. There, I met Fabienne Haustand, a dance teacher who was born visually impaired, but with an incredible talent to feel the music and teach this feeling to others. She developed a unique technique of teaching dance in the dark, with eyes tied up with a black scarf. She taught people who have poor eyesight or other vision-related disabilities as well as healthy people of any age. Her talent and love for her work worked wonders on the people she interacted with. She became the hero of my project – Dance With Closed Eyes.

Phoblographer: In terms of your approach in making the photographs, did you just turn up and shoot what happened or did you have a pre-idea of what you wanted to document? TI: I usually have an idea and an approximate vision of what I want to tell in the project, but I also attach great importance to the aspect of feelings and emotions that can often lead to much better results than even a perfectly crafted script.

“…I felt comfortable inside her dance and I knew, she felt great with my camera that followed her touching movements.”

Phoblographer: I think when you’re so close to a topic, you connect to things most people wouldn’t. Was there anything you learned from this experience? TI: An interesting thing about almost all my projects, which makes me think that it is maybe the special mission for me, is that they always came to me themselves, even before I started looking for a suitable topic and characters; something happened that seemed to make me start working on them and then soon after I felt like I was a part of this process and it stays with me for months, sometimes even years.

Phoblographer: As a photographer, what was your biggest challenge with this project? 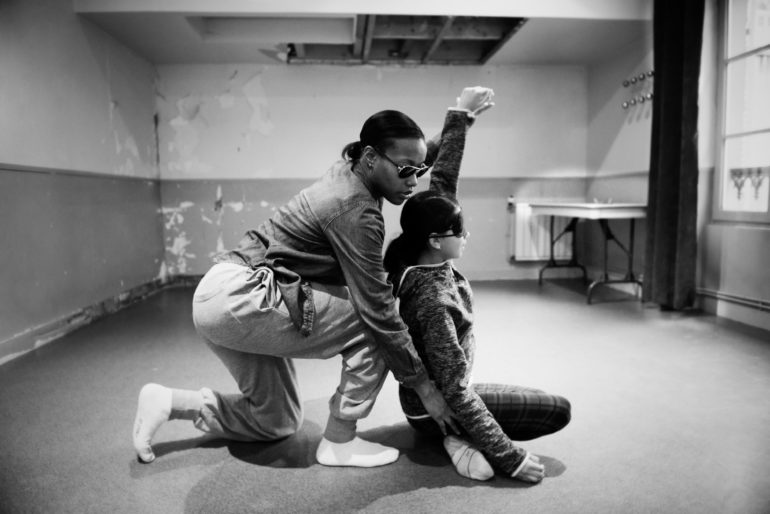 TI: For me, working with Fabienne on this project was something very natural from the first day that we met. I just wanted to spend more time with her, to know more about what she is doing. I plunged into her unique world and I loved it. I felt comfortable inside her dance and I knew she felt great with my camera that followed her touching movements. At the end we had this natural result of our communication and creativity together.

Phoblographer: Because of its sensitivity, did you feel any added pressure to do this project justice? TI: I don’t feel any added pressure because it was very natural, two-side creativity as I described it above.

“Fabienne is not only the character, but also a really great friend…”

Phoblographer: How did Fabienne react to the final set of photographs? TI: Fabienne loved this project, she said I felt [her objective] and was able to tell her story.

Phoblographer: When we spoke before, you told me this was one of your favorite projects. What made this project stand out from some of the others? TI: The characters of my projects are always special and close to me. Fabienne is not only the character but also a really great friend and an important person in my life.

Phoblographer: What other projects would you like to work on in the future? TI: Right now I am working on a project that revolves around the story of a very special circus. We started working during their tour in Coney Island. The principal character of my project is Eric Broomfield, a person with the unstoppable spirit of a modern sword swallower, and his sideshow entertainer Jelly Boy, The Clown who defied all barriers and conquered all obstacles in his miraculous recovery as a fire survivor. Eric Broomfield was trapped in an apartment fire in New York City after which he could only return to the stage as a circus sideshow performer. You can see more of Tatiana’s work by visiting her website.