All photos by Karen Arango. Used with permission.

Over the decades, America has become home to Latin Americans who have settled in the country. For those that left their nation behind, they have brought new culture — whilst trying to adjust to expectations put on them in the place they now call home. But there’s a new generation coming through. A generation that only knows America as their home, but one that is heavily influenced by Latin American attitudes from their parents.

Karen Arango is a photographer who has documented that generational crossover through her series Miss Behave. The work takes a look at the lives of young girls, ages five to twelve, and aims to understand what life is like growing up as first-generation American girls.

We spoke to Karen to get a deeper view of the work and to learn how it all came together.

Phoblographer: We’re always interested in how concepts for a series first come about. Please tell us about how the series ‘Miss Behave’ first came to your mind? KA: The Miss Behave series first came to my mind as I was coming up for ideas for an assignment for one of my classes at the International Center of Photography. I started to photograph first generation girls and it developed into a series. I began to receive a lot of positive feedback about it so I continued it. I then realized that it was a project of a reflection of myself as a young immigrant girl growing up in the United States.

Phoblographer: As a photojournalist, your topics will carry a lot of meaning and emotion, do you have to adapt the way in which your work when children are at the centre of the narrative? KA: I do have to be more sensitive when I am working with children. One of the main factors that will let me take a better photo and will help me tell the story better, is how I connect with them. Children are very honest and what they feel is what they will show, which is great because it makes the story more real and genuine.

Phoblographer: Your work talks about the pressure the young girls have to grow up quickly. Through spending time with them, did any part of you sense they knew that, in many ways, they were being stripped of their childhood? 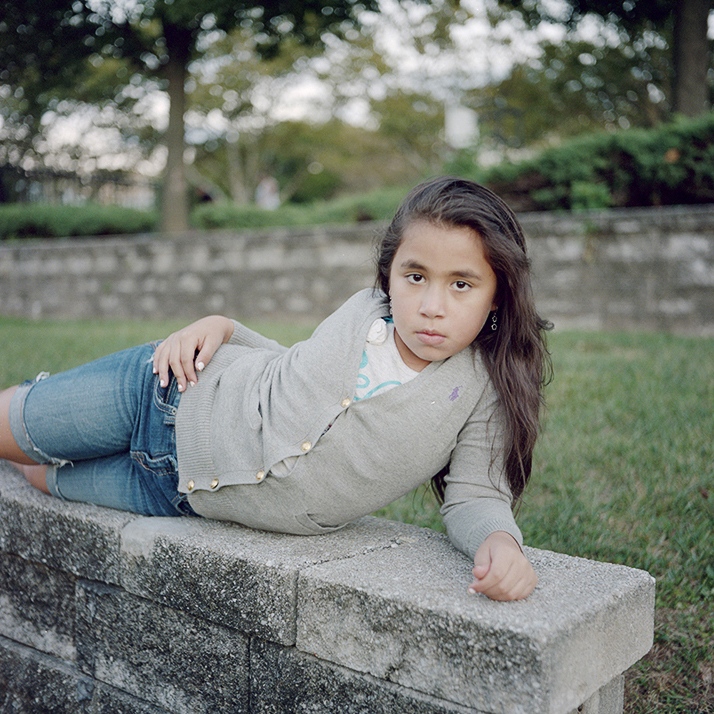 KA: In general, I do see a sense of maturity beyond their age, although, the level of maturity depends on what they have gone through. For example, one of the more mature girls I met, her mom had been deported when she was three years old, and she was only able to see her once a year. I don’t think they had that sense of knowing they were more mature, I think they will when they get older. KA: In my opinion, generally, the pressures that a girl or woman from a Latin American culture has is focused on the way women are supposed to act in order to keep her culture alive in her family. Every situation is different. But the fact is that some of these girls will have to take on the role of a smart and mature person in order to use all the opportunities this country offers to them, such as getting an education and then caring for their parents later on in life. In the American culture, a girl has more freedom and doesn’t have to deal with the conflict between having a very judgemental old school culture, whilst wanting the freedom that the American culture offers.

Phoblographer: What was the response of the families when you explained your motive for the series? Did any of them become defensive or feel you were questioning their parenting style? KA: Not at all, I think the parents understood the fact that there is an inner struggle of trying to adopt two cultures at once. They are usually very understanding and supportive. They also feel thankful for having their family included in the project.

Phoblographer: Whilst there is a sadness in having to grow up too quickly, do you see certain strengths and qualities that can come from the pressures these young girls face? KA: Of course, even though they may have to grow up at a faster pace and miss some parts of their childhood, all those experiences make them stronger, conscious women with the self-assurance to become who they need to in order to make worth the sacrifice their parents made for them by immigrating to America.

I think that rather than changing the stories of these girls lives, we need to provide more assistance, education and help for immigrant families.

Phoblographer: How did the process of taking their portrait go? Did the girls understand the bigger picture, or for them was it a nice opportunity to dress up and have their photo taken? KA: The younger ones didn’t understand the whole concept, but the older ones did. I guess most of them saw it as an opportunity to get their photo taken, but I still felt that I was able to understand and get to know them as we worked on getting the photos done.

As a photojournalist I am as honest as I can be with my subjects and the story I am telling.

Phoblographer: How does a photojournalist go about protecting the dignity of their subjects, more so when children are involved? KA: As a photojournalist I am as honest as I can be with my subjects and the story I am telling. I like to let the children be as genuine as possible and if there is anything they are uncomfortable with I won’t force it. Phoblographer: Personally speaking do you feel there’s a need for change in the stories of these young girls, or is their story just different and should be accepted? Personally speaking, I feel that there is a need for more sensitivity in the politics of this country. Referring to the many children living in this country right now who are suffering and scared to be left without a family. I think that rather than changing the stories of these girls lives, we need to provide more assistance, education and help for immigrant families. So, to answer your question, their story is different and we need to accept it but at the same time some of these families might need help for positive change and opportunities. You can keep up with Karen and her work by visiting her website.