15 Impressive Photography Projects That Inspired Us in 2018

Consider this round-up of photography projects as a quick year-ender from the culture side of things of The Phoblographer.

Let me begin by saying that it wasn’t easy putting this list together. We’ve been scouring the web for some of the most stunning photography projects and series out there, and we shared A TON with our readers this year alone. This is why I had to enlist the help of our Editor-in-Chief Chris Gampat to help me pick some of the most outstanding bodies of work we’ve featured for 2018. We came up with a selection of 15 features mostly dominated by conceptual photography and impressive portraiture, with a sprinkling of landscapes, mixed media, macro, and documentary photography. Join us in revisiting some of the most eye-catching, thought-provoking, and inspiring photography we’ve discovered for the closing year. In case you missed any of them, we hope they inspire you to take on some projects of your own in 2019! Saint Petersburg-based Ezo Renier described photography as his daydream about the world around him. It’s no surprise, then, that his body of work tackles surreal or fantastical imagery – from contorted women in glass boxes in the woods to humans depicted as creatures. They’re the stuff nightmares are made of – or dreams, depending on how you look at it. 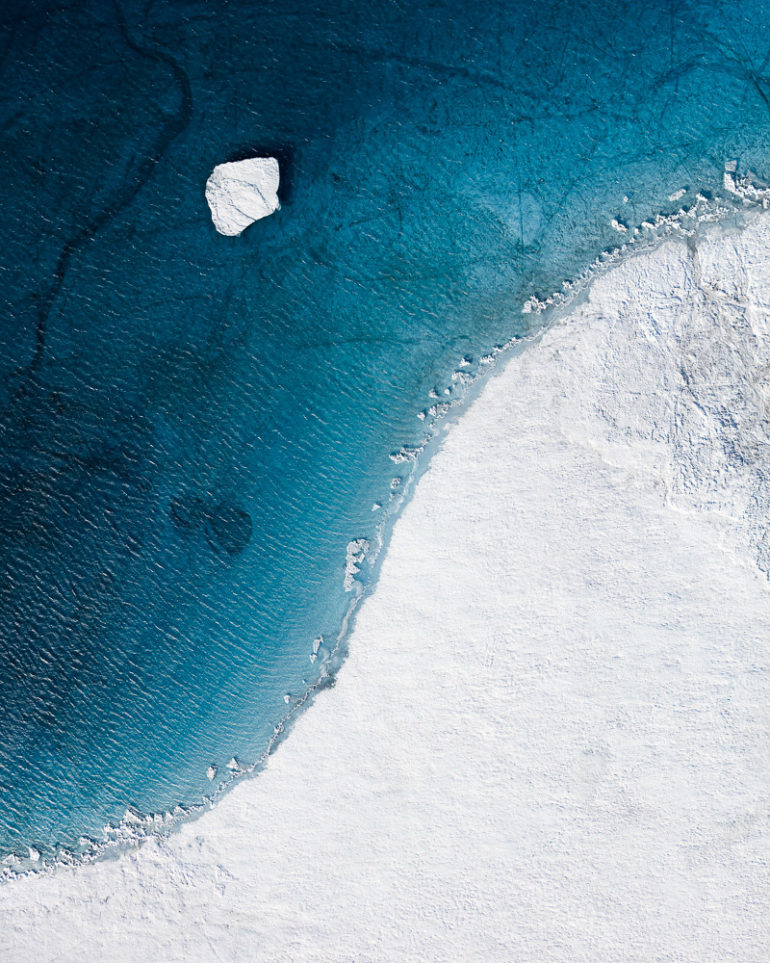 The Arctic region is one of the most extreme places on Earth, but also among the most vulnerable. We’ve long been hearing about why it’s imperative to keep the polar region protected; to avoid the catastrophic consequences. Munich-based Tom Hegen shows us what we could possibly lose to climate change in a beautiful, abstract-styled, landscape photography series titled The Two Degree Celsius Series. “My name is Stevie Iseral and I began taking photos at the age of fifteen. The moment I picked up my first camera, I immediately fell in love. Throughout my years of taking photos, I have tried to develop my own personal style. Being from Louisiana, there aren’t many modeling agencies available. This pushed me to challenge my skills and photograph my friends and family. I like to describe my work as dreamy, delicate, and colorful. My main goal in photography is to capture an individual’s natural beauty and help them see why they are so special. Everyone is so different, and I think it is amazing that we can capture that in a photo.” Getting interested in underwater portraiture and in need of some photography inspiration? We had a bunch of stunning underwater works featured in the past, and here is one of the most beautiful. In his three-part series titled Come Undone, Kazakhstan-based Arman Zhenikeyev shows us an unconventional approach to underwater portraiture that produced some interesting and moody results. A quick survey of the portfolio of Polish photographer Przemyslaw Kruk shows imposing landscape photographs of sprawling fields, mountain ranges, hills, and more. I don’t know about you, but I even feel just a little overwhelmed at the power these images portray. It’s probably due to all those wide open spaces and colossal landforms which masterfully blends together. Magical Landscapes. Infrared. Poland, however, is a completely different story. The opposite of Przemyslaw’s usual fare, this series is whimsical, with each image looking as if they’re pages taken straight out of a fantasy storybook. Here, the fields and trees are white, and the skies are unnatural shades of blue. Conceptual photography is certainly one of the most intriguing and challenging photography genres to get into and pull off. Still, that doesn’t stop some of the most creative minds from conjuring the most otherworldly imagery and translating them into narratives. Among our favorites are the works of Boston-based fine arts photographer Karen Jerzyk, the most recent of which is her Faceless series. When we photograph people, the goal is often to depict them at their best, in their most flattering angles, and most graceful expressions. Only in street photography and documentary projects do we aim to capture our subjects as candidly or straightforward as possible. But for Russian photographer Dmitri Pryahin, capturing the rawness of someone’s innermost thoughts and expressions is an even more fascinating way to photograph people. This perspective has lead to the most unusual results and unsettling visual narratives, marked by grotesque expressions and movements that we’ll find in his collection. There may be no signs of the neon trend going away anytime soon, but that doesn’t mean we have to keep shooting the same looks over and over again. The latest on our roster of photographers who are creating some interesting stuff with this trend is South Korea-based Steve Roe, who found a way to make neon extra trippy by combining it with kaleidoscopic prism effects. Exploring the Mysterious and Graceful Visual Stories of Laura Makabresku

I’ve always believed that, more than looking technically outstanding and visually impressive, photographs should be able to make the viewers feel. This often best applies to portrait photography, but is also at the heart of much conceptual photography out there as well. Case in point is the poignant work of Poland-based Laura Makabresku, who I believe creates some of the most beautifully emotive and unique photos today. Armed with visual narratives that are both mysterious and graceful, she appeals to our innermost emotions, which she describes as “opposites that build tensions within ourselves, which spark our creativity and vitality.” Fabian Oefner Underscores the Physicality of the Photograph in “Explosion Collages”

What constitutes a photograph has drastically changed with the advent of digital photography. Prior to being ushered into the digital world, a photograph meant the same thing to everybody — a physical print. Today, a photograph often means a snapshot we take and keep in our smartphones, or RAW files we keep in our computers and external drives for editing later. With this in mind, Swiss fine art photographer Fabian Oefner challenges our current perceptions of photographs with an intriguing project called Explosion Collages. If a picture is worth a thousand words, here’s a book that tells not one, but three fascinating stories! Titled Night of the Hunted, the photobook is comprised of three southern gothic stories set in 1960s’ America. If you’re a fan of conceptual photography projects with a clear and compelling narrative, you can grab this photobook at Matt Henry’s bookshop. These Photos of Butterfly Wings Consist of 2,100 Merged Images Each

If you think you got your macro photography game going, wait until you get it as strong as Chris Perani’s. In his incredible ongoing project, Butterfly Wings, he takes us to a stunning macro world brimming with exquisite detail unseen to the naked eye. This is macro photography taken to microscopic depths, and the way he creates these photos is in itself impressive. 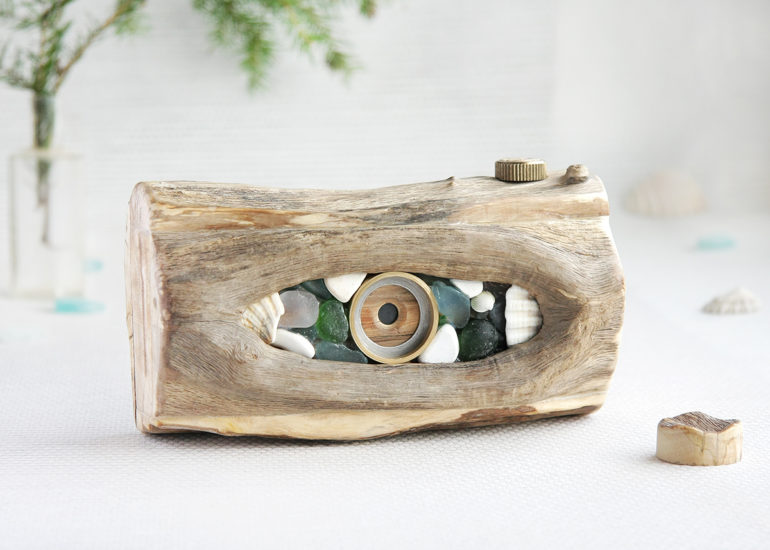 Pinhole photography is as simple and basic as it gets when it comes to creating images, but that doesn’t mean you won’t be able to make impressive work out of it. In fact, photographer and camera maker Sergey Lebedev proves you can make the camera itself jaw-dropping. After seeing his gorgeous handmade pinhole cameras made out of driftwood, I believe we no longer have any excuse to not take on crafting our own pinhole cameras, and getting experimental with it in the process. I’m sure that seeing something typically ignored made into something beautiful, unique, and functional is nothing short of inspiring. Over the years, we’ve seen a lot of talented photographers and impressive projects that were truly inspiring and creative. Many of them tackled eye-opening topics, and some of them challenged the boundaries and norms of genres and approaches. However, this work of Italian film photographer Mario Cipriano certainly tops our list of favorites. If you’re in need of some bright ideas to fuel your own drive for creativity and out-of-the-box photography projects, you’ll surely get a big helping with this! If travel photographers strive to capture a sense of place through their work, documentary photographers often seek the most compelling stories unfolding in a certain place, at a certain time. When New Mexico-based David Saxe decided to visit Brazil for the first time, he enrolled in a photography workshop held at the colonial city of Salvador, in the state of Bahia. Part of the workshop was a visit to the beach one early morning during the Carnivale, to witness the ceremonies and celebrations dedicated to Yemanja, a powerful goddess in the Afro-Brazilian religious tradition of Candomblé.

Remember that this is just a small sample, so if you find yourself wanting more, we have the handy-dandy Inspiration tab up there on the links for you to browse through anytime.