Photographer Patrick Rochon is well know for his light paintings and one of his cooler, more recent projects involves working with Infiniti. The company hired him to launch the new car, and to deliver within a month. The campaign is called #Borntochallenge and so Patrick got to work painting with light.

Here are words from Patrick:

I was recently given the inspiring challenge to launch the all-new Infiniti Q30 in the Middle East. This meant doing a creative hero video with the product, and a live show with the car on stage in front of thousands of people at the famous club O1ne in Beirut, Lebanon.

All this had to be done and delivered within one month.

Well, #BornToChallenge, as they call this campaign, was a perfect direction and a perfect fit for my light painting work and how I naturally challenge conventions. We all had to surpass ourselves to make this happen. From the assistants to the clients, we all took numerous risks and pushed beyond our limits at a fast pace, loving (almost) every moment of it. 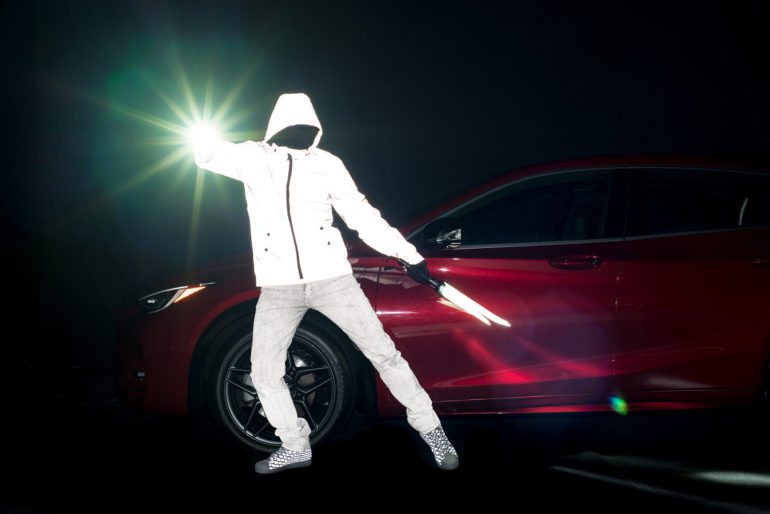 I created a character in a light-reflective costume to be the hero of this international creation. The character reveals the car with his light while creating and mixing his art with the fierce design and hot curves of the Q30.

The client gave me complete trust and freedom. I did the creative concept, directed it, co-produced it, and acted in it. It was a mad busy time with mission-impossible twists. Just my kind of hot & spicy creative time with all the ingredients to get the best out of me.

We rented a space in Montreal, had a car secretly delivered from Infiniti Toronto, and started testing lights and reflections for the first days. Once I had a good idea of how light reflected on the body of the Q30, we all got to work. Every day after work, I sent the day’s photos and a brief report to the team in Dubai to keep the trust unquestionable. We were a small and efficient team, indoors in a big blacked-out space (mostly pure darkness) for about 12 to 15 hours per day. Light painting does take more time than traditional photography however, you can achieve more in your initial shot and save long hours of retouching in post production. In parallel, while creating the video and still images, the creative research for the live show was happening even though the end result was completely different. For the live, I had to entertain a huge crowd, bring high energy and keep the room lit while performing. In studio, there are two simultaneous things happening, one is the action of the character for the camera not doing any usable light painting. The second part is the shots I do while hiding in the dark dressed in black, that create slick light paintings on and around the car. Since the reflective character is focused on his actions, we edit to mix both actions together to make it look entertaining and slick at the same time. The best of both worlds, making the product shine while entertaining.

This project gave me the opportunity to demonstrate lighting a car using 100% light painting; generating images in camera that are sexy, layered and close to finished without spending days of retouching reflections on the car to make it look great. The car is lit in a very unusual way and the results speak for themselves. This challenges the way we traditionally shoot vehicles, offering a more fluid and organic point of view. I’m being unconventional here. Lighting luxury vehicles is usually specially done in a very controlled environment, with very specific techniques that don’t allow much creative maneuvering. Infiniti Middle East thinks outside the box and allows bold new creations to happen. They believe in allowing artists and ideas to come forth to explore new grounds in a fast-changing world hungry for content, leaving behind older mind sets. The past collaboration we did with them, Inspired Light, is also an example of this kind of open mindset, see here.

Oh, and by the way, I’m not the one doing the big jump in the video. I hired a local athlete who specializes in Parkour and body movement, language and posture. He has founded a great multi-disciplinary gym I want to go to (Aeküus.com). Jérémy became my stunt double and that’s a first in my life. Naturally, healthy food and good music playlists were at the rendezvous. Technically speaking, we used the Sony FS700 for the video and the A7RII with manual Nikkor lenses for the pictures. We used my Liteblades (Liteblades.com) mounted on Klarus RS11, XT12 and XT30 for trails and a did few touches with the Pixel Stick. I also used a mini soft-box with a Klarus in it to move by hand and generate thick soft lines. The ring light to light the character is by FotodioX. The four Tube-LED by Cine-light are new tools I acquired for this project and they worked perfectly for hand-held car lighting.

The editing was directed by Pierre Tremblay (Listofilms.com), who’s been a great wingman on all my Infiniti projects. I did all the effects of light painting cumulation for the video.

Do pay attention to this original track composed for this video by Romain Strugala, lot’s of time and love was put into these beats!