All images by Louis Draper. Used with permission from the Steven Kasher Gallery.

Photographer Louis Draper is a famous street photographer, or at least he has been for many years. Before passing in 2002, his work was well received and respected here in New York and internationally in Germany, France, Moscow and more. But in Louis’s home state of Virginia, it wasn’t exactly the case.

The reason: accepting black photographers and their work isn’t exactly seen the same way all over the United States. As his sister, Mrs. Neil Draper-Winston tells the Phoblographer in an interview, his first showing was at the Black History museum in Richmond. And today, Louis continues to inspire photographers with Virginia State University (and many other places) exhibiting some of his work.

This weekend, his exhibition at the Steven Kasher Gallery closes on February 20th. 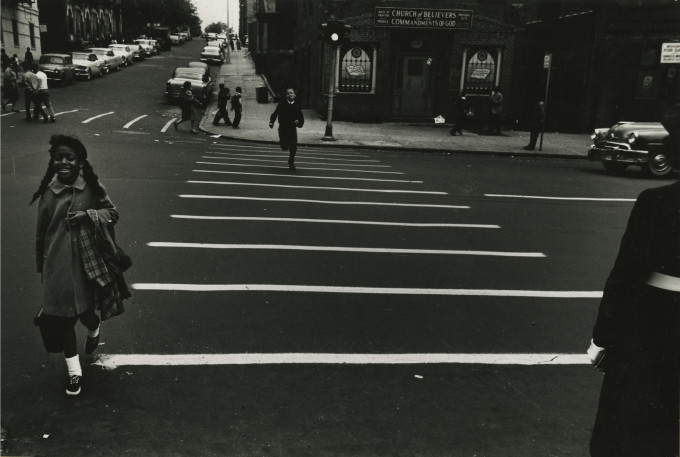 “Dad tried to interest Louis into photography but all he wanted to do is play baseball and basketball.” states Mrs. Winton. “But in college he got a camera and he eventually joined the camera club and the college newspaper the Statesman.” Louis used to say that his interest in photography was a divine intervention One day while at college, he returned to his room to find a book of black and white photographs on his bed. Louis said that the photos seemed to jump through the book to him and he continued to thumb through the book throughout the night. Louis’s father had given him a camera when he got into college and so he decided he had to go to New York and become a photographer.

Louis was a street photographer and people were his main focus. According to Mrs. Winston, part of this influence may have been from his father. “Dad ran around photographing the kids and the neighbors asked him to take family portraits.” Indeed, you never saw Louis without his camera.

Street photographers and the art form itself has put an emphasis on capturing the candid moments. Our obsession with documenting the “Human Condition” often involves a voyeuristic approach that literally personifies the photographer becoming the fly on the wall. The style of being the on-looker has well suited photographers who have been shy and that have only wanted to just shoot without possible repercussions in public. In contrast, Louis started out by asking his subjects for permission. “Most folks were very kind” says Mrs. Winston. “He always appeared comfortable. By getting this initial permission, Louis was able to do exactly what photojournalists and documentary shooters do when they tackle an assignment: shoot without inhibitions and get the people comfortable with the fact that they’re being photographed. To that end, Louis also used his images to try to promote social change. Louis was very much a photographer that was about capturing telling body language positions and facial expressions that conveyed what people were thinking. Louis himself was very serious minded and always wanted to know how people thought and what they were thinking. “He enjoyed capturing the character of everyday people in his photography” states Mrs. Winston.

In this way, his work is quite a study of the psychology of the people around him. Louis typically photographed African Americans, Whites, and there are even photos of Hasidic Jews going about their daily lives.

Louis resided in Harlem–an area in NYC which for years was quite dangerous and where many people didn’t go it. In more recent years, gentrification has changed things.

Much of what Louis captured back in the day were the conditions and lifestyles that people lived in while living in Harlem. While racial inequality still continues into today, it’s made rather large strides forward to full equalization.

When asked what Louis would think about America today, she states that he would still be disappointed and troubled by housing discrimination, income issues, the building of jails as opposed to rehabilitation centers, and more. However, he would acknowledge the country’s step forward. Despite Louis’s love of photographing people, one big thing stands out quite interestingly. At one point in his lifetime, Louis lived in the Bronx right across from Yankees stadium. His father would come by to visit and they would watch the games together.Louis loved baseball and basketball, and in high school he was a pitcher. However, Louis never photographed baseball players in their true element. This drive to document people and try to change America for the better came from his being mentored by Mr. Langston Hughes. One of the most famous things that Mr. Hughes told Louis was “I fight discrimination with my pen, you fight it with your camera.” Mrs. Winston relayed in our interview that this stuck with Louis for many, many years.

For a period of time, Louis also lived in the Bowery. Mr. Hughes owned a Brownstone and Louis roomed in that building. When Mr. Hughes saw some of Louis’s photos, he saw passion for the craft in Louis. From that day on, Mr. Hughes took Louis under his wing. Mr. Hughes would be a very big influence on Louis’s work and even try to do what he could to help him progress. In fact, when Louis would be paid late for his work, Mr. Hughes would write letters to the companies urging them to pay Louis promptly. Later on, he started to do more experimental work like abstracts, but what still sticks with us today is his documentation of the people and the conditions during some of the times America was going through radical changes.