All images by Gian James Maagad. Used with permission.

“I got into street photography when I had sort of a depression from work and personal problems.” says Photographer Gian James Maagad who was born and raised in Cagayan de Oro City, Mindanao Island, Philippines. “So I needed an outlet, on my daily commute I suddenly had to urge to shoot in the streets.”

Gian works as an Accounting Supervisor in a bank. But on the side, he’s got a bit of a street photographer in him. His EyeEm profile will more than prove this to you. He’s done exhibits in museums along with some of the best street photographers in the Philippines and has even attended workshops by Eric Kim.

No matter his background though: what’s clear is that Gian is an excellent street photographer. But what may draw you in the most is his ability to shoot excellent images in the rain. Gian: I first got into photography when my mom bought us our first DSLR for the family, a Canon EOS 60D, wayback January 2011. Then I have my uncle in-law who is into photography and he was teaching me. Later I tried portraiture, weddings, events and some documentary.

Phoblographer: How did you get into street photography? Gian: I got into street photography when I had sort of a depression from work and personal problems. So I needed an outlet, on my daily commute I suddenly had to urge to shoot in the streets. I really enjoyed photographing strangers in their daily candid life. As David Allen Harvey said, “Art out of everyday life.” Then I joined a group of street photographers based in Manila, named “Litratista sa DAAN” translated as “street photographer” in Filipino. The group really helped me improved in my skills, along with Eric Kim when I joined his workshops last January 2013 in Manila.

Phoblographer: How do you feel that the rain makes street photography change? Gian: Having the rain as an added element to street photography, it somehow creates different kinds of mood. Some people hate rain, disgruntled, some people love or enjoy in the rain. I see more drama and challenges on shooting under the rain.

Phoblographer: What motivates you to go out there and shoot in the rain? Gian: I’m highly motivated on the energy that the rain brings. It usually makes people challenge as to how would they carry on their daily lives despite the rain. It’s like a poker game, you’ll never know what you’re gonna get. It’s also really challenging for me, on my left hand i have my small umbrella, on my right hand I have my Fujifilm X100 with a square lens hood, on my body I have my messenger bag. Try to imagine walking around, following strangers with all those around your hands and body. Haha!

Phoblographer: What are you typically looking for in a scene when you create photos? Gian: I’m always looking for different scenes that somehow brings mood, in some ways some photographers would dare not shoot under the rain. It could be people struggling or happily walking in the rain. I also look for people on how they would go from one place to another with or without anything to cover them from the rain. 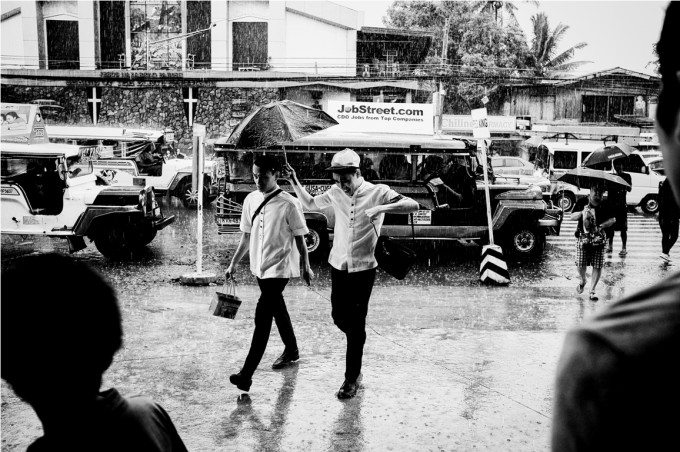