All images by Stephanie Jung. Used with permission.

Stephanie Jung is a freelance photographer based in Berlin, Germany. I found her on Behance, and fell in love with her work–specifically her use of layers to create the feeling of a city. Stephanie has shot photos of many cities, but her idea of layering one image on top of another and yet another (and another) perfectly captures the chaos that a city can have much better than a single long exposure can.

“It’s about time and caducity” says Stephanie about her work. 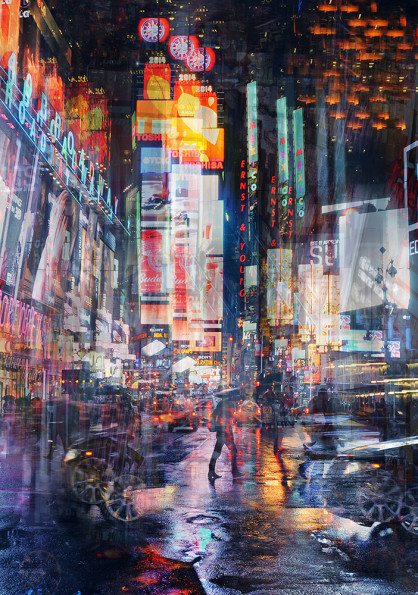 Stephanie: I was always interested in photography, as my father was a very passionate hobby photographer. But I became more interested at the age of 16, when I bought my first bridge camera with more flexibility, so I was experimenting a lot with different motives and techniques of post-production.

Then from 2008-2010 I studied Visual Communication with focus on photography, during that time I met a photographer who was very inspiring to me. Her name was Sabine Wenzel and she was an amazing artist, too; that’s where I became interested in Fine Art Photography and taking pictures with a different meaning than the obvious. We spent a lot of time together taking photographs and she always motivated me to find my own subject in photography.

Phoblographer: What made you want to photograph cities and specifically layer image upon image?

Stephanie: I think the main fascination with urban life is because I grew up in a small town, where life is different than in huge cities like Berlin. I always enjoyed travelling there and was fascinated about life there and how clearly you can see the movement of life and the hectic life of a city. I first had the idea when I was in Paris, at the La Defense district, which is a very busy area. I wanted to boost this busy mood and so started to experiment with some new techniques. But it became my main topic, when I was in Japan the next year. Standing on Tokyo’s city hall and viewing this endless city definitely influenced me in my vision.

Phoblographer: So when you’re creating the images, where does the creative inspiration come from? How do you know when you want to layer one image upon another? Stephanie: My work is a lot about everyday scenes from a city, I take the images during a walk through the cities. I do not plan to take images from a special motive, it happens very spontaneously, I walk around and see scenery or moment I really like and then take a picture of it. That could be a beautiful romantic street or a busy square somewhere in the middle of a city. I find beauty both in calm and busy moments, as I think both represent life at its best.

So you can say I’m motivated by life itself, by special moments or places I see. The layering is something which became important and almost self-evident to me, as it represents best what I want to show with my work. There’s no moment where I ask myself if I want to layer one image, meanwhile it became a matter of course. Phoblographer: Every artist and photographer tries to creatively express themselves through their work; so what are you trying to get across in these photos?

Stephanie: I’m trying to visualize time and transience, which everyone is confronted with, but can’t be seen with our eyes. My photographs are captures of moments from life, often photography is about capturing special moments, so that you can always remember it when looking at the picture. But I want to show more of this moment, show that it’s fading. In my images there is a central moment in focus, but at the same time it seems to fade, which is what happens in real life. Another point is the business of big cities, this really fascinates me. Through this technique I’d like to increase that feeling to the viewer.

Basically, I want to show the movement of time, not just a single moment.

Phoblographer: How do you know specifically when you’re done with the creation of a single image? Stephanie: I know when I’m done with the creation of an image when I have a connection to it, it’s a feeling I have, I have to be simply happy with the result. Sometimes it takes several attempts and a few weeks until I’m satisfied with my work. I need some time and also distance to my images, look at them again after a few days or even weeks to finally have an opinion about it.

Phoblographer: Why do you choose the stylize the images in the way that you do to make them look like a painting? Stephanie: I realized that I like blurred photography during my internship, where I learned a lot from Sabine Wenzel, she really inspires me with her work. I love how you can show movement with blur and I like the feeling that abstract art conveys. You can create your own magical world, change the view on things in life and focus on different details than seeing the world just how it seems to most of us.

I think it’s exciting to see what you can achieve with photography. There’s more possibilities than just capturing memories for the future, you can show so much more with different techniques and experiments.

Phoblographer: What’s the goal of this series, a book? A gallery? Stephanie: The main goal or reason is to express myself and work on personal projects. I think it’s important to transfer your thoughts and feelings, everything that’s on your mind. It’s kind of a contrast to the everyday life and I love creating my own world and my personal way of seeing it.
Of course I like to present my work as it’s so interesting to hear what other people think about it and to see if they connect with my work. I’m selling most of my images through Art galleries, but I never thought about creating a book. Maybe this will change in the future!