All images are copyrighted Leo Martinez, and are being used with permission.

Cities are microcosms of culture, history, tradition and art, and they often make for very fine photographs. For Leo Martinez, that city has been Chihuahua, the capital of the state of Chihuahua in Mexico, and it’s one that hasn’t lost its history. Martinez sought to capture the essence of the place, the traditions that are very much alive, the modern sensibilities that can occasionally eclipse those traditions and more. His work caught the attention of VSCO, and he earned a grant from the company’s Artist Initiative. Here, he talks about how he goes about capturing what makes Chihuahua Chihuahua, the inherent challenges of street photography and more.

Phoblographer: What was it about Chihuahua that made you want to photograph it? Leo: I wasn’t born in Chihuahua, I moved to this city 8 years ago, my first 5-6 years in this place were a little boring. To be honest I didn’t know anything about the place I was living. But I was happy and I still am. I studied Communication and Digital Media at the University (ITESM), during my studies I had a lot of classes about sociology, cultural studies, globalization and I realized that Chihuahua is a very interesting place, people from Chihuahua have a hate/love relation with their own city and culture, sometimes they defend with blood and sweat their amazing and northern traditions and sometimes people don’t want to still live in Chihuahua for many reasons that happened in the state. But deep down I know they are very proud of being from Chihuahua and I include myself after living 8 years here. In Chihuahua you can find an amazing mix of different Mexican cultures and traditions, for example the Raramuri tribe coming from the mountains in search of work in the city, also you can find men and children who still using “sombrero” and this kind of cowboy clothes, plus all those modern subcultures we see in any city. Also I saw how the music is very important for people in Chihuahua, you can find a lot of street musicians playing Mexican music and people dancing around them. Chihuahua’s downtown is not a very huge place, but there are a lot of elements that represent the meaning of being from the Northern Mexico. And I found in photography a very good way to start showing to people of Chihuahua the amazing place where we are living and who people from another places get amazed by the culture. 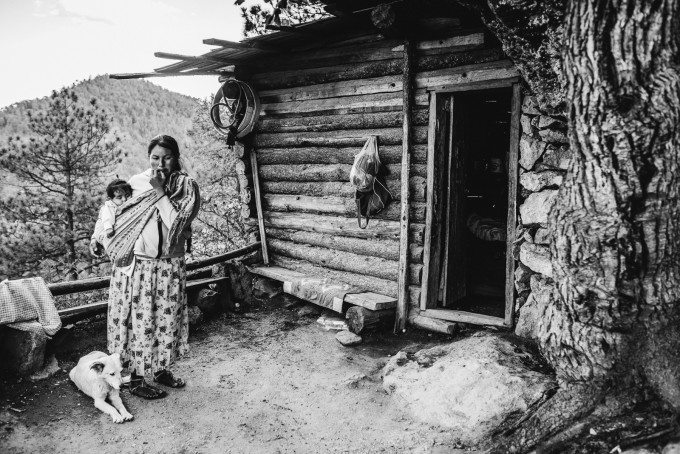 Phoblographer: There’s a moodiness to your photographs in that they’re darker than one might expect. Why did you choose to photograph this way, particularly in black and white?

Leo: I’m a huge fan of the work of the first generation of Magnum photographers, Cartier-Bresson, Robert Capa, Robert Frank, Josef Koudelka, etc. And I found inspiration in their pictures and thats the reason why I love black and white photography. Also I found in B&W photography a good way to reduce the distracting elements that sometimes we find in the street and I always try to create pictures with the least possible elements and thats the reason why I always try to find shapes made by shadows to hide things or very clean dark/white backgrounds. Phoblographer: In the course of “capturing the essence” of Chihuahua, what have you learned about yourself as a photographer?

Leo: I learned how to approach strange people when you want to take a picture of them and also different ways to take pictures without anyone noticing that your are taking pictures. On the more technical side I improved my picture composition and I became more critical of my own work. Also I learned that telephoto lens sucks for street photography, people will think you are a creepy and you don’t feel the adrenaline when taking pictures very close to the people.

Phoblographer: How has the grant from VSCO’s Artist Initiative helped your work?

Leo: I think the most important thing about the Artist Initiative support was the fact I realized that I was doing a project and very talented people got interested in it, that was amazing. In some ways it was like a dream come true, I’m huge fan of VSCO since the first version the VSCOCam and I love the photographers the feature in their journal, so when I saw my pictures on their page I got a lot of confidence in myself and especially inspiration to make more and better images. Phoblographer: When you started photographing Chihuahua, did you have a specific idea or intention in mind from the start, or did that develop as you kept photographing?

Leo: Sometimes we get bored and thanks to the everyday monotony we hate the place where we live, we stop see things that are awesome. But thanks to photography I tried to do the opposite. I started taking picture of Chihuahua 2 years ago after living for 5 months in Budapest. Coming back to Chihuahua after living in another country I think helped me a lot. I started to appreciate the city and began to see Chihuahua like a tourist, just like the way I was taking pictures in Budapest. At the beginning my main goal was taking pictures for me and to show to my friends in Budapest, but then I started to realized that maybe the project could be more than that, and after one and half year of taking pictures every weekend I think I began to shape the project.

Phoblographer: What have you learned about Chihuahua over the course of photographing it? Leo: I learned very basic stuff I didn’t know about Chihuahua and I think was a shame I didn’t know it before. For example the name of the streets, where to find the best place to eat something, where are the best locations for making portraits, the museums, in fact I think there are more places and stuff of Chihuahua I still need to know and As I said before, now I appreciate a little more to the city.  But I think the most important things I learned were not about the place, I think I learned more about the people and who we work as humans, I met very interesting characters of the city and their personal stories gave me some lessons.

Phoblographer: What are some of the technical considerations – camera and lens choice, flash or no flash, etc. – when you go out to photograph on the street?

Leo: To be honest when I going to shoot on the street I tried to go with the simplest gear, only camera and one lens, at the beginning I started using a Nikon D600 and a some lenses, a very old and manual Nikkor 28mm, then a very cheap 50mm. With the grant, I bought a Nikon Df (small and the people think is a film camera) and a 35mm Sigma Lens and I fell in love with this combination. The 35mm is amazing for street photography. I tried to use flash a few times, but people always get mad of flash in their faces.

Phoblographer: What is one piece of advice you’d give to someone who’s looking to document a city?

Leo: The hardest thing to take pictures on the street is to overcome fear to shoot strangers without permission, to be honest it was something that stopped me a lot when portraying  people in the city. However, we must realize that a photograph is not going to kill anyone, we are not doing anything wrong. And a very easy way to overcome this fear is to take a few pictures interacting with the person before taking it. This gives a lot of confidence to start shooting some candid street photos.