People of Cuba: A Personal Project All images by Jeroen Nieuwhuis. Used with permission.

Photographer Jeroen Nieuwhuis is one of the creatives behind New Day studio and has been shooting since he was 11 years old. Back then, he used to do skateboarding photography. He recently travelled to Cuba for a specific documentary project that he posted on Behance (and called it People of Cuba). Jeroen tells us that he finds it very important to do personal projects like this aside from his commercial work.

With the help fo a guide, he gained the trust of the locals and was truly interested at the fact that these folks are living 50 years back in time on minimal recourses and income. Jeroen: At the age of eleven I picked up my first camera through the love for skateboarding. While capturing my friends skateboard maneuvers my obsession for photography grew and it started to get more serious. Inspired by movies and other photographers work, my photography slowly shifted from skateboarding to more commercial stylized images.

A creative collaboration with cinematographer Erik Journée resulted a few years ago in our own
photography & film studio called ’NEW DAY studio’. This studio is fully equipped with high-end film
and still cameras, lighting equipment, a large cyclorama wall and all kinds of different background opportunities. Ideal for all types of photography and film productions.

Phoblographer: What attracted you to doing documentary style photography.

Jeroen: Besides my commercial work I find it very important to keep myself sharp by doing personal projects. I love to travel and meeting interesting people and this let to a cinematic documentary style I prefer to shoot. Phoblographer: Cuba has recently opened itself up to tourism, what were you expecting when you went there?

Jeroen: At first we thought there would already be a lot of western influences. Luckily this has not happened yet. But I think there will be some major changes in the cuban cities by large corporations and the beautiful historical Cuba/Havana will change rapidly. Phoblographer: When you went there to take pictures, what was your intention? You’ve done lots of portraits and images of people where it seems that you’re intimately close enough with them to gain their trust.

Jeroen: We did a lot of pre production before we when on this trip. We scouted online for interesting places/people and arranged a english talking guide. We wanted to shoot people in their
natural habitat doing their everyday thing. Just real images that represent their lives.

Phoblographer: How did you go about gaining the trust of strangers in a foreign land? Jeroen: Our guide Ernesto was our translator and he helped us asking the people for permission to photograph them. Nobody refused and we gave everyone a fee for their time.

Phoblographer: What about these people inspired you to photograph them?

Jeroen: The fact that they are living 50 years back in time on minimal recourses and income is something that really caught my interests. And of course the beautiful Cuban scenery that makes the perfect background for these portraits. Phoblographer: Talk to us about the boxers. Boxing is big in Cuban culture and you seemed to have become very friendly with them too.

Jeroen: When planning our trip we came across the Gimnasio de Boxeo Rafael Trejo,
the oldest boxing gym in old Havana. The day we arrived we immediately grabbed our skateboards and went to the gym, approximately 2 kilometers from our hotel. When we arrived they were having their daily training session. We just stand there looking for half an hour amazed by the immense heat they were training in (approximately 38 degrees celsius) and the perfect scenery. The pockets in the plaster walls, the cracks in the concrete floor made it look like a movie set. Later that day we met our guide Ernesto for the first time and drove to the gym trying to set up a meeting to photograph them. For some money in exchange we were able to photograph their training the next day. The boxers were really helpful during the shoot and did everything we asked from them. A must visit if you ever go to Havana!

Phoblographer: What gear did you bring with you on this trip? Jeroen: On this trip I brought my medium format camera (Mamiya 645DF+ with Leaf Credo 40) and a Schneider 28mm F4.5 & 80mm F2.8 leaf shutter lenses. I also brought my ‘Paul C Buff Einstein flash head with a vagabond mini power pack’ as my portable flash and a 47″ octabox as my light modifier.

The reason I brought my medium format instead of a normal DSLR is the ability to shoot at sync speeds up to 1/1600. This allows me to underexpose the ambient light and make the flash my main
light. This combination makes me completely in control of the light scenario.

Phoblographer: What are some big tips or recommendations that you’d give to people who want to shoot in Cuba?

Jeroen: Make sure you leave the cities and go on adventure in the countryside! The landscapes are just as incredible as the people who live in it. 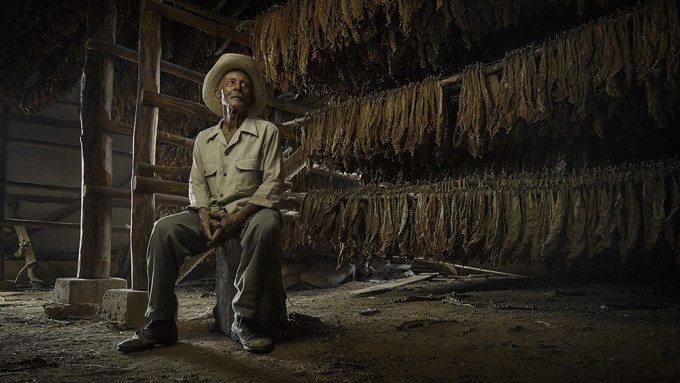