Chris Voss: On Photographing the Streets of NYC All images by Chris Voss. Used with permission.

Photographer Chris Voss moved to Brooklyn from Oakland, CA in 2013 to pursue his dream of shooting in the streets and spaces of NYC. Of course, the city houses some of the best street photographers in the industry–and so the inspiration comes from them. But Chris’s love for photography started when he developed a roll of film that was shot during his birth. He uses exclusively point and shoot film cameras including the Yashica T3 or anything that is not broken at the time.

After getting the film developed, he shares the images to Instagram. His images bring out an NYC that you don’t see much; but is always there. 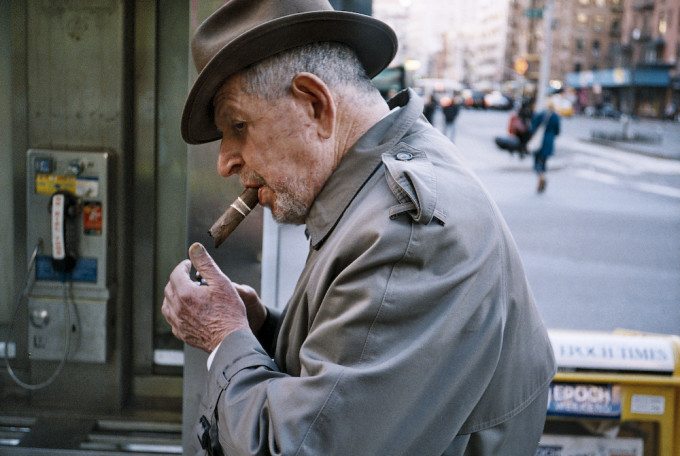 Chris: My dad was an amateur photographer and always had film cameras around. He would occasionally dig out his old prints to show me or my sister things. Photos from a Led Zeppelin concert, amazing solarized prints of giraffes he did in his bathroom darkroom. I developed one of his leftover fridge rolls once, and it was a roll from my own birth. Heavy. Chris: I got into street photography by accident. I was walking around SF with a friend and decided to try out a Minolta SRT 101 since a digital camera I had was broken. I took a photo of this super weird balloon animal hustler who posed for me. I developed it in a short lived bathroom darkroom and really got a rush out of seeing that frame. It was super blown out and dirty. I was like okay; I want to do that again. Then I’d mess up again, and be like maybe next time. Let’s do it again. Photography is all failure. Chris: The obvious NYC ones, I love Mermelstein. Ray Potes and the Hamburger Eyes photographers they have been publishing crazy work forever. Troy Holden is amazing, another SF photographer I follow. I was looking at Daniel Arnold’s film photographs on his site and reading an interview the other day and was getting really pumped. When the dust settles one day, there will be plenty of “new masters” to idolize.

Phoblographer: Lots of photographers shoot based on feeling and gut instinct. But what about a scene makes you actually pick your camera up and capture it? Chris: The good ones it’s almost like a mental highlighter, form just presents itself. I am super interested in smokers, I try to catch people lighting their cigarettes in a kind of real life game. I shoot what’s interesting to me.

Phoblographer: What are your favorite areas in NYC to shoot, and why?

Chris: I like to go for crazy long walks, eat some dollar pizza to refuel. But lately I’ve been trying to stay present on a corner and take in the flow of people. I have been thinking about the idea of the corner a little bit too hard lately. The best place to stand is the middle. People will go around you. Phoblographer: Many photographers simply try to capture the moment, but what exactly are you trying to do as a street photographer? Is there a purpose? Why do you do it? Chris: I used to and still do aimlessly wander or take photos as I go about my day. But I really want to do more projects, if anything at least mini location based projects. I just went to Warren RI, and it was amazing. Small towns have so much gold as much as big cities do. I dream of someone funding little road trips and presenting them in zines.

Chris: I only use point and shoot film cameras. It is very serendipitous for the city, and I don’t have to think too much. I have broken two Yashica T3’s and I’m on my third one that I currently use. I have broken an Olympus epic, various Minoltas, but still have a surviving Canon Sure Shot Tele 80 I got for ten bucks. I use Portra 800 film which costs as much as some of these cameras. Phoblographer: Has anyone ever stopped you and said, “Please stop?” How did you deal with it? Or has anyone become very angry with you? Chris: I have always worked customer service jobs and people have yelled at me for the most ridiculous things, and it is so soul crushing. Taking pictures is cathartic, and you have to power through those uncomfortable moments or your pictures won’t ever be good. The only person who is going to say please stop is yourself, and you have to ignore it. I’m still working through that.

Phoblographer: What issues do you feel street photographers are facing as a whole, and how do you think we can overcome it?

Chris: For me, sometimes I can’t even get out of bed to shoot or do anything. Those are the days I’ll try to develop film, when I’m feeling down, because at the end of the day you’ll have something you created and at least that feels good. It’s super overwhelming to be a photographer because everyone is one. Do you buy new shoes you need or do you wait a little longer and buy a few rolls of film? When you’re only shooting for yourself at this point, it’s a battle of convincing yourself it’s worth it, and that maybe if you go a whole year and still get nothing great, that maybe you’ll have good work at the end of ten years from now. And to keep going. People or things in your life will encourage you a long the way, look for that.