Years ago when I was still finding my way with shooting portraits, I loved working with ring flashes. They delivered lots of punch, gave off a beautiful catch light in the eyes, and it would later on become part of a look that was highly valued by the fashion world. Fast forward, and ring flashes are still popular–and the Terry Richardson look still hasn’t gone away. That doesn’t mean that ring flashes can only do that type of work, in fact they can do quite a bit more.

Recently, Godox came out with the Witstro AR400 ring flash–a compact solution and alternative to many of the more expensive offerings out there. While it’s very capable, it has a few drawbacks. – Very nice light output that is also quite specular

– A bit heavy to hand-hold for a while

* Even illumination and versatility
As a ring flash, AR400 adopts ring head to achive shadow-free illumination; as a LED video light , AR400 is equipped with LED bulbs to adjust the light brightness, which offers stable light source for photography; as a outdoor flash, AR400 is light and portable, which meets the demands of outdoor photography.

* Convenient accessories
AR400 is equipped with folding light bracket, umbrella bracket, diffusion cover, etc. All the accessories are easy to be installed and detached, which is helpful for achieving creative light effects. The Godox Witstro AR400 ring flash is a pretty large unit if you’re used to using light modifiers that take hot shoe flash light and send it around. But if you shoot with genuine ring flashes, it won’t be too much of a problem.

The flash is characterized primarily by a giant ring. It’s big and fat and heavy but still more compact than other offerings on the market.The large white area also means that the diffusion properties are solid. Turn around to the top and you’ll see an entire method of mounting your camera into the flash using a rain system to raise or lower the camera as well as bring the camera more or less into the donut circle. For the best results, we recommend making sure that the front of the lens is through the flash ring. On the side of the ring flash you’ll find the ports. One works for connectivity and firmware updates, and the other two are radio trigger ports for wireless flash triggers. This side could have used a spot to mount said triggers once they’re plugged in. On the back of the unit you’ll find the battery towards the bottom as well as all the rails that you’re supposed to use to connect the camera to the flash. You’ll want to make sure that these are connected tightly lest the camera fall out. 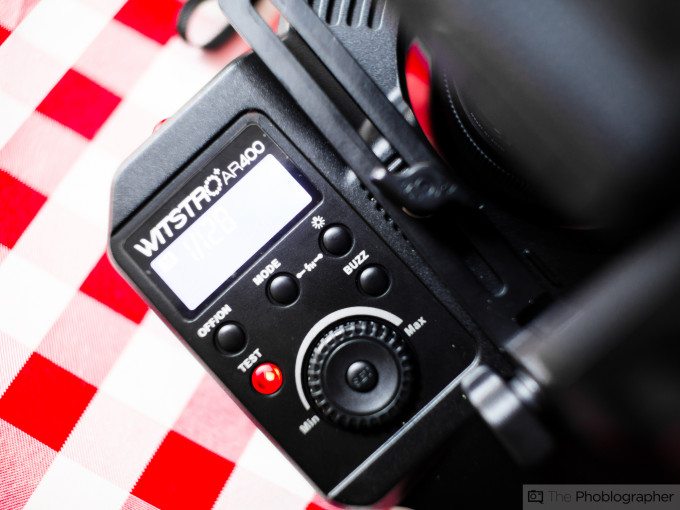 On the back side, you’ll find the controls for the flash. Adjusting them are very straightforward and simple to do. The Godox AR400 ring flash is built really, really well. In fact, we were very surprised at how sturdy the build quality is. But with this sturdiness also comes some heft. Shooting with the ring flash with the camera and a lens mounted inside essentially means that all the arm curls that your pathetic weak arms can do won’t help you. Instead, it’s going to wear out your wrist. For that reason, the Godox has many different tripod mounting options that you’ll want to take advantage of.

And if you’re using a light like this, you should also be using a good lens–which means even more heft. Actually using the light to shoot photos is pretty darned straight forward. If your camera has a PC sync port, we recommend that you use this option. Hook the PC sync cord into the camera and the end of the sound cable into the light. Then you’ll have no problems.

Because we used the Canon 6D and for some reason the company didn’t put a PC port in, we had to use PocketWizard Plus III transmitters. The receiver ended up falling out a couple of times and so I needed to wrap it around my wrist as I shot.

The Canon 6D’s issues aside, the ring flash is designed to pretty much accommodate any camera with its mounting system. Changing the settings is as simple as pie and shooting is quick and easy. We recommend using the light with a handheld light meter though to get the fastest results. During our tests with the Godox Witstro AR400 ring flash, we found that in order to get the best image quality, the light needed to be very up close to a subject (in this case Bec) in order to actually get the characteristic ring in the eye look along with shadowless light. The Godox does an incredible job of creating a shadowless look (or mostly shadowless) when combined with the right exposure settings. However, we again recommend getting up really close to your subject to get those signature catchlights in the eyes.

The further you are from the subject the more powerful the light will need to be and the more you may need to stop down the lens.

But if you’re going to sit there complaining about this, then go get something from Profoto or Broncolor. – Color consistency issues, but this isn’t a personal problem at all.

The Godox Witstro AR400 ring flash is a beautiful light that is sturdy, can deliver the right amount of punch where you need it, and will find its best use in the hands of semi-professionals, fashion photographers and those that do photo booths. For these folks, it’s probably one of the best investments that you can get your hands on.

We award the Godox Witstro AR400 ring flash four out of five stars. Want one? Check Amazon for the latest prices. Blink Photographic offers it for $559 shipped from the United States with a 2 year warranty (1 year on the battery) and have arranged for US repair (Still waiting for parts on the AR400) on the entire Godox line.