It’s been quite some time since I’ve handled a Sony alpha DSLR. The last one I reviewed was the a58 well over a year and a half ago. The a77 Mk II flitted across my vision some number of months ago as the closest thing performance-wise to the titanic a99. It has the same megapixel count as the a99, just on a slightly smaller sensor, and it’s got the heft of a serious camera. The a77II arrived on my doorstep with the 16-50mm f2.8 and 70-200mm f2.8 in tow. When I opened the box, I was looking at a perfect photojournalism kit.

-Articulating LCD has an awkward construction

-Fairly pricey, though there are deals now around the holidays

-The menu system is dense The Sony a77II is a sizable camera, and its seriousness is affirmed both in its weight distribution and design. You’ll notice the large grip on the right side, providing more than enough to hold onto, and the leatherette finish adds some extra texture to help you maintain your grip. The front of the camera is marked by a lens release, popup flash button and focus dial, which has four options: Manual (MF), Continuous Servo AF (C), Automatic (A) and Single Servo AF (S). Have your focusing preference set beforehand because adjusting the dial in a pinch can be a bit of hassle. On the top of the grip, there’s the aperture dial. The top is where half of the action happens. From left to right, you have the mode dial, hot shoe, pop-up flash, LCD/EVF button, exposure display, display light, self-timer/burst mode button, white balance, exposure compensation, ISO, ON/OFF switch and shutter release. The a77II is a well-designed camera and all the buttons, dials and toggles along the top are easy to access, and everything can be adjusted with your eye at the viewfinder. While there are some who bemoan EVFs – I used to be one of them – it is a highly useful feature that allows for quick adjustment in real time. Welcome to the back. Here you’ll find your menu button, EVF, diopter dial, movie button, auto exposure lock, AF/MF button, shutter speed dial, joystick for menu and AF point navigation, Fn button, Display button, magnificatio, playback and trash. All of this surrounds the articulating LCD. Right below the Sony logo, you’ll notice a small bump. That’s the hinge on which the screen can rotate 180 degrees. To protect the screen, spin it around and keep it closed. With the screen in, you can pull it down, so that you can shoot from the hip, and given the way the hinge works, you can flip it all the way up to effectively take self portraits.

Don’t do that though. Just please…don’t do it. Behind the grip, you’ll find the dual SD card and Memory Stick Pro Duo slot. To be honest though, we’re not sure why Sony is still using the memory stick format. It’s a bit antiquated. 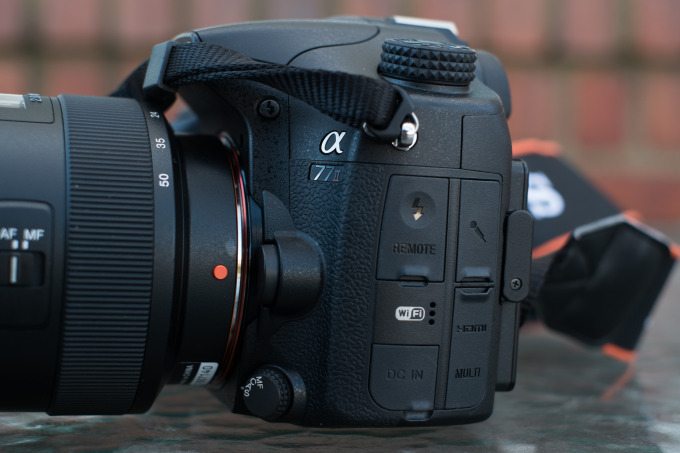 On the other side, you’ll find ports for remote triggers, microphone, HDMI out, multi and DC in. The a77 Mk II also has wi-fi which allows for wireless transfer of JPEGs and remote control of the camera. Both of which work very well.

The a77II has a hard plastic body and a leatherette finish on the grip. It’s heavy, too. With the 16-50mm f2.8 attached, you’re looking at close to four pounds hanging around your neck, which may not seem like much in the grand scheme of things, but it’ll wear your neck out after a while. Neck strain aside, the a77II’s weight is distributed very well, and it feels reassuringly solid. My review period with the a77 Mk II coincided with a string of protests on the heels of the Ferguson and Eric Garner verdicts. Earlier in the review, I wrote that I knew I had the perfect photojournalism kit when I opened the box, and I was right. In particular, the a77II and the 16-50mm f2.8 proved to be an excellent combination in a situation as chaotic as a protest, and the a77II’s AF was spot-on 95% of the time. The shots missed were a consequence of sudden movements and shifts in direction. The more I photographed with the a77II, the more I realized I could trust it to get what I needed in focus. It worked well both in the brightest and darkest situations.

Alternatively, manual focusing was also a breeze with bright focus peaking lines that helped capture the quieter moments. Either way, I came away with more images than I realized, thanks in no small part to the a77II’s 79 AF points.

Anyone familiar with Sony’s system will have an easy go of the a77II, both in its external and internal navigation. Having said that, I’ve spent a considerable amount of time shooting with mirrorless cameras the past year, so much so that I forgot how intricate Sony’s menu system can be. There are a wealth of submenus that can a bit disorienting at first, but you’ll get used to them the more time you spend with the a77II. What was great was that the grip was bookended by an aperture wheel at the front and a shutter speed wheel at the back, which streamlined the adjusting of both on the fly. The Sony a77II meters accurately, which helps to minimize that work in post, and the JPEGs the camera puts out are stellar. Those require almost no work, and you can kick them to your phone over wi-fi to put them up where ever you like. The a77II has a 24.3 MP APS-C sensor, which is the same megapixel count as the venerable Sony a99. What this means for you is large RAW files and surprisingly large JPEGs. The default size for these images is 6000 x 4000 pixels. This is great if you want to make a larger print.

One of the biggest things I noticed during the course of the review period was the a77II’s color rendition. I was consistently impressed by the images I saw on the LCD and subsequently in Lightroom. Never once did I think, “Gee, I wish I were shooting on a full-frame camera.”  The a77II’s image quality more than satisfied me during my time with it, and when friends have asked me for camera recommendations, I’d reply with, “How wedded are you to your brand?” Those folks were mostly Canon, and based on what they wanted, I knew the a77II with the 16-50mm f2.8 would definitely suit their needs. The ISO here is 1600, and the noise, while present, is smooth. Thanks to the sensor’s performance at higher ISOs and the versatility of the RAW files, which I’ll get into in the next section, I was able to fix the exposure in Lightroom. I had overexposed somewhat, but that wasn’t a problem. Of course, the a77II can’t hold a candle to the a7S, the reigning king of high ISO performance, but who really needs ISO 409600? The a77II’s RAW files clock in just shy of 25MB a piece, and within those <25MB is a tremendous amount of information that gives you a great degree of latitude in post, should you mess up the exposure in camera. I absolutely screwed up the exposure on the original version of this image. It was severely underexposed, but thanks to some handiwork in Lightroom, I was able to recover nearly all of the detail. The a77 Mk II’s RAW files were great to work with in Lightroom. -Solid feel in the hand

-Articulating LCD takes a while to get used to

-Super-dense menu system can be confusing

-Regular price is a bit high, though it’s on sale now

The Sony a77 Mk II is a fantastic piece of hardware that consistently impressed me with its image quality, and it was a constant companion during my photojournalistic assignments during the review period. It has more than enough megapixels to go around that house an impressive amount of detail that can help you in post.

I typically shoot with an X-Pro1, so going back to a DSLR was a bit of a trip, but never once did it feel cumbersome. There are some quibbles with the LCD and dense menu system, but you can adapt to those. Those who beat the full-frame will say, “But it’s not full-frame!” And to them I would say, “It doesn’t need to be.” It’s not about the size of the sensor. It’s how you use it.

For all of these reasons, we’re giving the Sony a77II an Editor’s Choice Award and five out of five stars.

Pick up yours at B&H, Adorama or Amazon.

HoldFast Gear Ruck Strap: The combination of canvas and leather will make this camera hang more comfortably around your neck than the in-box strap.

Sony 16-50mm f2.8: This is an excellent kit lens, and the crop factor means you have an effective focal range of 24-75mm, which is perfect for photojournalism.