When a review of the Lowel GL-1 was first pitched to us, we knew quite a bit about the product already. The GL-1 is targeted at photographers that want to do long exposures and has a lot of features that creatives would surely love. Indeed, some photographers have used it to great effect and in the right hands it could totally be a tool used to great ends. But the GL-1 has some inherent problems–many of which made us delay this review for many months.

– Has the features a photographer needs

– Operation can sometimes be a nuisance.

Taken from the B&H Photo listing of the product. The Lowel GL-1 is a flashlight that somehow or another resembles an UZI submachine gun that you’d find yourself wielding in one of those Call of Duty games, except that instead of bullets it assaults your subject with rays of light. The main light is at the top along with controls, then there is the ergonomic handle and the battery pack down at the bottom of the product. The trigger one handle is how you’ll control the light for the most part. The grip itself though could use some extra ergonomic shaping to make it conform to a hand better.

Below the grip is where you’ll find the battery holder–swapping batteries is simple enough. The light has vents to keep it cool and from overheating during long sessions of trying to paint a subject with light. This head is part of what you’ll be working with much of the time. The back of the handle has a switch that controls the intensity of the light. This way, you can dial it in to be brighter or dimmer depending on your range from the subject. Near the bottom of the grip is the on/off switch. The head has a zoom functionality–if you want to call it that. It works in a pump action way that either narrows/intensifies the beam or widens/weakens the beam. The more exacting amongst us may never take it off of the most narrow setting.

For the most part, you can’t really complain about the GL-1’s build quality. It’s solid all around and not a single piece of it feels cheap. Imagine one of those heavy duty flashlights that explorers and construction workers use and you’ll have this flashlight–except that this one seems a bit beefier.

However, the beefiness isn’t enough to justify the expensive price. 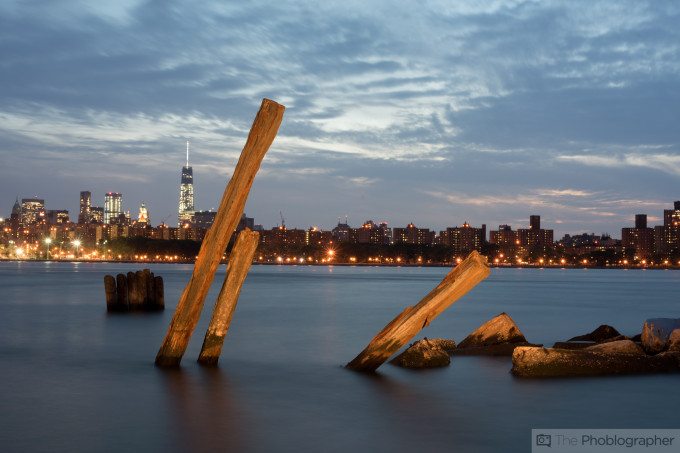 We’ve had this unit since late last year and there were many delays on us taking it out. For example, NYC went through a Polar Vortex that made going out and doing long exposures quite a hassle. Otherwise, we had snow. But each time we tried (and we sure did try many times a month) something annoyed us about the GL-1. The usability is straightforward and simple enough, but a couple of questions came into my head every time that I ventured out:

– What would possess me to take a near $700 flashout out with thousands of dollars of camera equipment?

– Why is it so clunky in my camera bag? Indeed, transporting the light isn’t the easiest thing to do when you’re using the NYC subways and at times trying to do some Urban Exploring. When it came to straight forward operation, it was really a breeze, but besides the beam adjustment, we really couldn’t sit here and justify taking an uber expensive and massive unit out to shoot all the time–especially when there are cheaper units that can do a similar job. To be fair though, with a lot of patience and proper know-how, the GL-1 can do quite a great job–but not an amazingly better one than other lights can. The Lowel GL-1 has a lot going for it in terms of functionality, but it has a couple of really big an unavoidable problems. For starters, there is the price: this has to be the most expensive long exposure tool for a photographer in the world–and it doesn’t even have a Leica name brand on it. Second, it’s large and clunky. We’re very positive that they could have made it much more compact and in the form of a more conventional flashlight.

Because of this, we’re awarding the Lowel GL-1 a two out of five star rating.