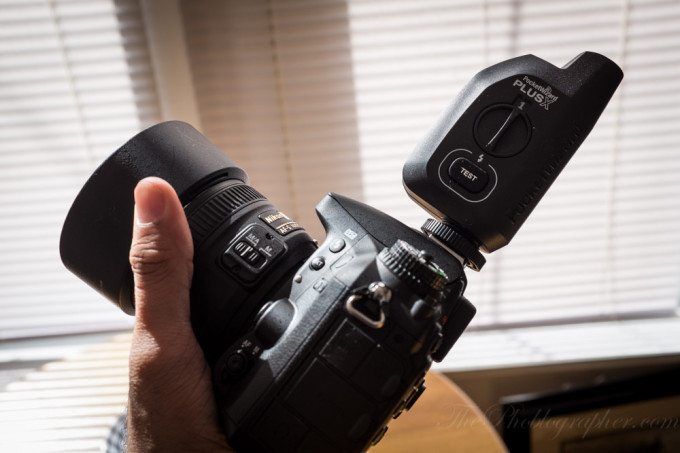 At the beginning of the month, PocketWizard announced their new Plus X radio triggers. The transceivers, which I wrongfully believed to be a replacement to the Plus III transceivers, are actually a budget level version of the radios targeted towards a totally different crowd. Upon their release, commentors on Strobist called the company out–citing that they were late to the game and that Yongnuo and Phottix both have totally gobbled up the budget level radio users. Additionally, they claimed that the reliability of these Chinese-made transmitters is equal to that of PocketWizard at a much more affordable price.

Since we’ve received the units, we’ve been testing them multiple times a day. So how do they stand up to the criticisms?

– Solidly built. Better built than the Plus III units, in fact.

– Works with any other PocketWizard unit made so far

– $99 still gets you just one unit while competitors let you set off a flash connected to another receiver at the same price.

– No hot shoe to hold a speedlite requires you to sometimes use a PC sync cord. The new PocketWizard Plus X is the company’s return to the simpler way of working with radio triggers. There is no digital display this time but instead a giant wheel that you’ll turn. When you spin this magical wheel, it changes the channels. When the trigger is actually on, the number illuminates.

Then there is the test button on the front, too. It’s significantly larger than the last one was. The front side of the Plus X features a 3.5mm jack port. Using this port you can use one of several cords to work with studio lights and flashes. The trigger comes with:

Then there is also the on/off switch, which isn’t necessarily intuitive to figure out but once you explore the trigger you’ll be able to figure it out. Additionally, you can put a little threaded strap here to prevent the trigger from getting lost. The back of the Plus X has the battery compartment door as well as a spot to have it screw into a 1/4 20 thread mount. When the units are on, the front number will glow red. On top of the Plus X, you’ll see a blinking light. Green means lots of power. Yellow means it’s low. Red means you’d better change it.

Vs the Plus III The Plus III had its on/off switch clearly marked here as well where as the new Plus X has it on the front of the unit.

The Plus X triggers have to be amongst the simplest transceivers made by the company. The process involves you quite literally turning them on, connecting one to your camera while another connects to your strobe/speedlite, making sure they’re on the same channel, and then shooting.

The transceivers automatically detect whether they should be in transmitter or receiver mode. And this makes the workflow even easier.

One of our PocketWizard Plus X triggers took a seven foot fall onto concrete. I shrilled as I rushed forward to pick it up. It suffered a scratch but thankfully it still worked. Overall, the units still feel more solid than the Plus III triggers.

With One Speedlite in a Softbox For one of our first tests, we shoved a Canon 580 EX II into a Photogenic 24×32 softbox. The PocketWizard needed to connect to the speedlite via a PC cord. Luckily, the company provides one in the box with the transmitter. This test took place over a period of a couple of days and happened very casually.

This is where I really started to wish that the Plus X transmitters had a hot shoe port. The PC cord and port had connection problems throughout my shoot. I often needed to connect and disconnect the trigger because of the unreliability that a PC port provides due to the nature of its design. Additionally, many different cables were tried.

It even came to the point where I switched out to my Yongnuo 560-EX speedlite and I needed to use that at one point. This problem could have been totally solved though if it were just connected to the hot shoe to begin with.

Once they actually started working though, there were no reliability issues at all and the triggers consistently worked with every shot. In order to get this effect, I needed to put the LightCraft Workshop Fader ND DigiPro HD (dialed down to around two stops of light killing) on the Sigma 35mm f1.4 EX. The reason for this is because high speed sync flash mode (which lets you shoot at a higher shutter speed to totally kill the ambient lighting) is not capable with these radios in order to kill all of the ambient light totally. The rest was all done in Lightroom 4. At one point in my testing, I tried to figure out a couple of different ways that I could reliably and accurately test the range of these units. The advertised range of the PocketWizard Plus X units is 1,600 feet. In reality though, I’m really not sure how many photographers would use these triggers at that range. The audience that I personally see using the Plus X triggers are those that need a budget friendly and reliable transceiver. If you’re going to use a range like the one advertised, then I see someone going for the Plus III triggers instead and perhaps even using the extended range capabilities of those devices.

Either way, I personally try to work close oy my subjects–and even 85mm can begin to feel like too long of a focal length to me at times. My range tests involved me moving about 1/8th of a city block away from my subject. The triggers still fired consistently and without fail every time.

To test the reliability, I shot with the triggers in a wide variety of places. These locations included my apartment, my complex, studios, outside, in warehouses, etc. The Plus X fired consistently without fail at all.

With a Monolight and PocketWizard Plus III units One of the ways that I decided to test the PocketWizard Plus X triggers was to use them with a monolight–which is essentially what they were designed for. As far as a setup goes, one Plus X was attached to the hot shoe of my Canon 5D Mk II (Sigma 35mm f1.4 EX attached) while the other was attached to the monolight–in this case a Paul C Buff Einstein E640 with a Westcott 7 foot silver interior umbrella attached.

When I was shooting the image to the left, I wasn’t very far from the monolight, but it fired consistently with no issues.

After a while though, I switched to a Plus III hooked up to a Polaroid 185 via the PC port. The combo once again fired flawlessly with no issues at all.

The major test came later on though when the PocketWizard Plus X was really tested to its limits. After one of the triggers took a seven foot fall, I brushed it off and hoped that it still worked. Once my lighting assistants and I walked an extra three blocks to get to the location I wanted, we set up. The triggers once again worked flawlessly and were able to keep up with a furious shooting pace that is typical with shooting models. They never misfired; and it was only until later that night when I was editing the images that I realized that.

At one point, I took a quick break when some cops came by and watched. But thankfully, we had no trouble and they were just interested in seeing what was going on.

No matter the combination or the pitfall that the triggers took though, I had no issues working with them. In fact, it was quite a liberating experience that they also worked even when taking a tumble. For that reason, we can recommend that Plus X to anyone–even the novice with no clue as to what they’re doing and that may possibly be quite the butterfingers. Let’s conclude: for $99 you get a transmitter and a receiver in one. This particular model is designed for use of monolights via PC port or 3.5mm jack but can also be used with hot shoe flashes via PC port. Unfortunately, there is no hot shoe mount–which is what many people wanted due to the versatility that those small flashes can provide.

These triggers seem designed for the person that wants to set up a small studio and needs something extremely simple to use. And in many ways the Plus X is the most simple trigger out there. It boasts the build quality to boot. But the only problem is that there are much more affordable triggers coming out of China right now, and they are also reported to be quite reliable though they don’t have the range of the Plus X.

In the end though, a single bad thing can’t be said about these products–but we still wonder who would purchase them.