Fujifilm’s 14mm f2.8 was announced a while back, and the lens is now starting to ship into the hands of reviewers and buyers everywhere. To date, this is the company’s widest angle lens–rendering a 21mm field of view in full frame terms, and when you incorporate the aperture’s depth of field on 1.5x crop APS-C sensor on the X Pro 1, it really comes out to around 21mm f4.5 (1.5 stops away from f2.8.) This is the lens that the company is marketing to street photographers, landscape shooters, and architecture shooters. Fujifilm has a long history of making lenses, but how does this one stand up?

For this review, we used the Fujifilm X Pro 1 and 14mm f2.8. The X Pro 1 was updated with the latest firmware.

Specs pulled from the Adorama page listing of the lens. The 14mm f2.8 is a lens that feels as if it is the chubbiest of those released so far. Understandably, it could have something to do with the design of the lens.

First off, the front of the lens seems massive compared to the 18mm f2, 35mm f1.4, and 60mm f2.5 previously released. And the lens hood doesn’t make it any smaller. Pop the hood off though and you have the rest of the lens overall. Still, this has to be one of the biggest mirrorless camera lenses with autofocus that I’ve ever held. As is standard for the Fujifilm X series, there is an aperture ring around the lens with thirds of stops. This ring turns fairly smoothly, but is a bit too smooth for my liking. It is nothing like Zeiss, Leica, or Voigtlander. Want to autofocus this lens? Pop the ring back into place and you’re ready to shoot the lazy man’s way again. 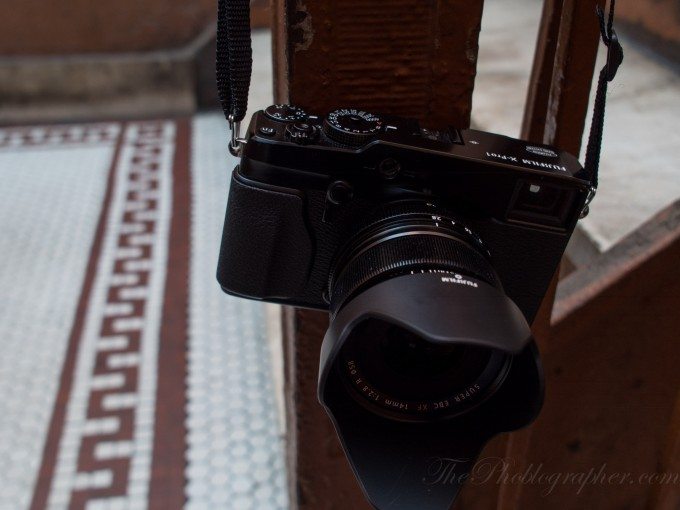 In my hands, I felt that this lens isn’t really a finished product. The grooves around the focusing ring are sharp and feel as if they could cut a finger. It’s almost as if Fujifilm is trying to punish me Yakuza style for manually focusing their lens by putting razor sharp grooves to my finger pads.

Additionally, I still think that the rings could have been smoother. But in terms of hardiness, this lens is perhaps the most solidly built in the series.

However, I still love manually focusing with this lens using the zone focus/hyperfocal length method. That’s how I was taught to shoot street photography.

Fujifilm made this lens very simple to use: there is an aperture control, focusing control, and it can also go into an excellent manual mode. This is a lens that will appeal most to the experienced photographer vs the newbie.

I’ve shot a couple of images with the lens so far with extremely little post processing (literally moving a slider or two a couple of degrees). Here’s what I’ve created with this lens so far. In our tests so far, we’re fairly impressed with the image quality but still don’t think that this lens can touch the 35mm f1.4. However, we love the fact that Fujifilm decided to put a working depth of field scale on this lens. The build quality is also the best of the X series lenses released so far.

We’re a bit disappointed with the autofocus performance on the X Pro 1, so far, with the latest firmware updates.

I’ve been shooting with this lens for a couple of days so far and I can’t truly pinpoint who would buy this lens. While the focal length appeals to certain photographers, it has its caveats that we’re going to need to explore more in the full review. Stay tuned.